Israel has kept a low profile on its military dealings with Azerbaijan, but Armenian-Israeli activists have taken the issue to the streets. 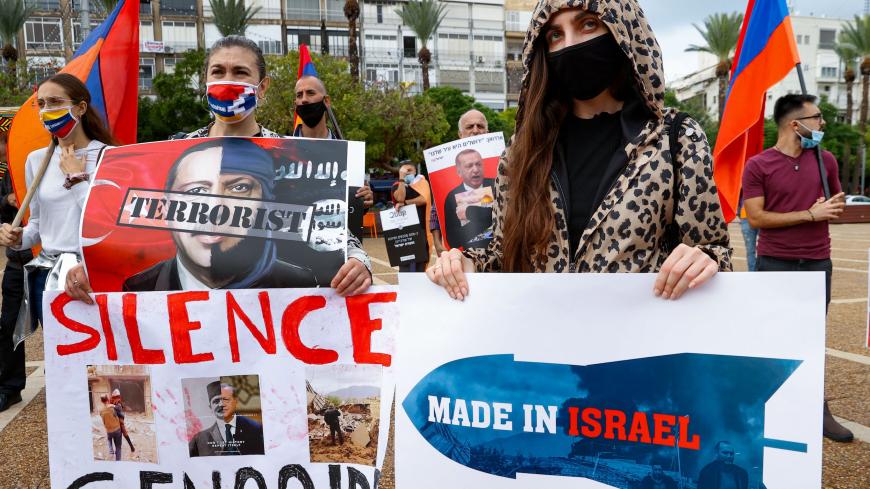 Members of the Armenian community in Israel hold banners in the coastal city of Tel Aviv on Nov. 6, 2020, as they protest Israel's arms sales to Azerbaijan and Turkey's support to the latter. - JACK GUEZ/AFP via Getty Images

Protesters who arrived to the square explained that they demand Israel stop its arms sale to Azerbaijan and that Israeli authorities condemn what they consider Turkish-Azeri aggression, especially Turkish transfer of Syrian jihadists to fight on the Azeri side. They ask Israel to recognize the self-declared Republic of Artsakh, saying it is the only way to end the bloody Nagorno-Karabakh conflict.

Friday's demonstration was not the first. Activists have been protesting for several weeks now in different locations across Israel. Demonstrations took place in Jerusalem, Jaffa and Haifa, where Armenian communities traditionally reside, as well as in other places.

On Oct. 27, activists demonstrated outside the Tel Aviv offices of Channel 2 parent company Reshet-Keshet, demanding media coverage of Israeli arms sales to Azerbaijan. On Oct. 22, Israelis of Armenian origins demonstrated outside the Foreign Ministry in Jerusalem. The Armenian National Committee of Jerusalem posted on Facebook, "Armenians of Israel protest against Israel's arms sales and supply to Azerbaijan and condemn the Turkish-Azerbaijani aggression against Artsakh and Armenia demanding the recognition of Artsakh as a free and independent republic." On Nov. 2, Armenians marched in the streets of Jerusalem carrying Armenian flags.

The demonstrations were first held once a week, but the pace seems to be accelerating. Another rally is being organized for this evening at the Judith Bridge in Tel Aviv. Dozens, sometimes hundreds of people attend, often reciting poems and playing music as an expression of longing for their homeland. On Oct. 29, when Armenian activists rallied outside Israel’s national theater Habima in Tel Aviv, a flute player played Armenian melodies.

Activists Diana Galstyan explained to Al-Monitor that demonstrators include Armenian-Israelis who have lived in Jerusalem's historic Armenian quarter for generations, immigrants from Armenia and other ex-Soviet countries and Israelis simply engaged with the Armenian cause. "In the past few weeks we organized several events, including a vehicle convoy from Haifa to Jerusalem with some 200 cars participating, large rallies in Jerusalem and Tel Aviv, a protest march in Jerusalem with 300 participants, a demonstration outside the Knesset, a memorial event for those killed in the conflict at the Jaffa Armenian Church and more."

Galstyan said that the activists are very busy on social media and trying to engage Knesset members. "Our goal is to raise awareness among Israelis who don’t know about the war and don’t know about Israeli involvement. The Israeli press is quiet, claiming it must stay neutral. We are trying to explain that in this case, neutrality is an immoral position that goes against the values of the Jewish people who suffered the Holocaust."

Not only is the busy international agenda, with the US presidential election and the raging pandemic, keeping the media’s attention focused elsewhere, but Israel would also rather distance itself from the Azerbaijan-Armenia conflict. Over the years, Jerusalem has established a strategic alliance with Baku. An Israeli diplomat explained to Al-Monitor that Jerusalem greatly values its relations with Azerbaijan as moderate Muslim state. The countries share mutual interests in security, energy and trade. Azerbaijan’s location near Iran and its ties with Gulf states are also significant.

Since the beginning of the conflict, several media outlets have reported on the Israeli weapons and drones allegedly used by Azerbaijan against Armenians. On Sept. 30, journalist Barak Ravid of the Walla news site published an interview with Hikmet Hajiyev, assistant to the president of Azerbaijan. Hajiyev said in the interview that the Azeri army has been using Israeli-made drones, including loitering or "suicide" munitions, in the recent round of fighting with Armenia, stating, "Hats off to the engineers who designed it." He also said that the Azeris “very much appreciate the cooperation with Israel, especially the defense cooperation.”

Was Hajiyev provoking the Armenians or was he revealing the truth? Israeli authorities are keeping mum. On Oct. 5, Amnesty International reported that its crisis-response experts "were able to trace the location" of footage supposedly showing an Israeli drone in a battle zone "to residential areas of Stepanakert and identified Israeli-made M095 DPICM cluster munitions that appear to have been fired by Azerbaijani forces." The group reminded readers that cluster bombs are banned in all circumstances under international law. No other international body has confirmed that Israeli bombs have been used in the conflict.

Shortly after the interview, Armenia recalled its ambassador to Israel for consultations. The Foreign Ministry in Jerusalem stated only, “Israel attaches importance to our relations with Armenia, and because of this sees the Armenian Embassy in Israel as an important tool for promoting the benefit of both peoples."

The protests are the continuation of years of campaigning by the Armenian community and leading politicians for Israel to recognize the Armenian genocide of 1915. This plea also appeared on the protest signs over the past few weeks. Protesters feels the two campaigns are intertwined.