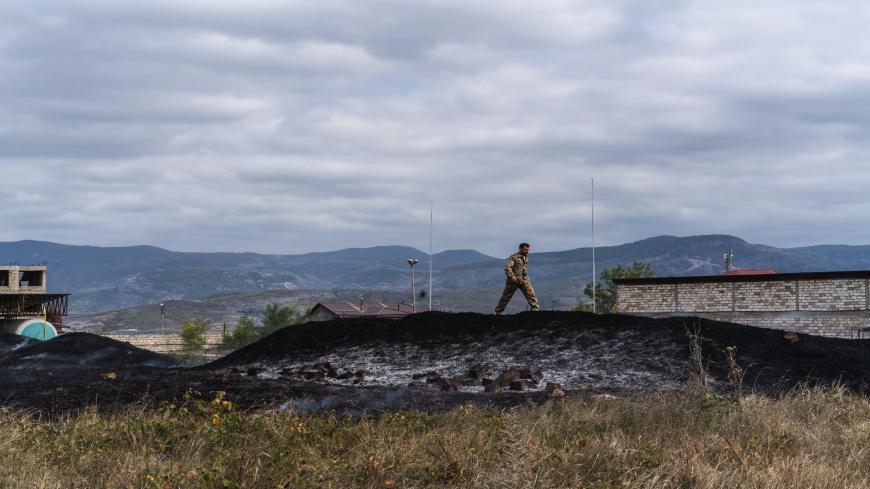 An emergency services member stands atop the site of a grass fire started by a bomb that fell nearby on Oct. 2, 2020, in Stepanakert, Nagorno-Karabakh. - Brendan Hoffman/Getty Images

Canada has halted arms exports to Turkey while it investigates whether the drone technology was improperly used by Azerbaijan’s forces during ongoing clashes with Armenia, the Canadian foreign minister said Monday.

"In line with Canada's robust export control regime and due to the ongoing hostilities, I have suspended the relevant export permits to Turkey so as to allow time to further assess the situation," Foreign Minister Francois-Philippe Champagne said in a statement.

Azerbaijan and Armenia are locked in the worst outbreak of violence the South Caucasus region has witnessed in years. Hundreds have died during clashes this past week in the contested Nagorno-Karabakh enclave, which is officially part of Azerbaijan but run by ethnic Armenians backed by Yerevan. Turkey is backing Azerbaijan in the conflict.

Last week, video analysis from Project Ploughshares, a Canada-based arms control group, appeared to indicate that drones used by Azerbaijan had been equipped with imaging and targeting systems developed by the Ontario-based L3Harris Wescam. The Globe and Mail newspaper reported that Wescam was granted permission this year to supply Turkish drone manufacturer Baykar with seven systems.

The Ploughshares report alleged that "Canada's export of WESCAM sensors to Turkey poses a substantial risk of facilitating human suffering, including violations of human rights and international humanitarian law."

Canada last froze new export permits to Ankara in October 2019 following the Turkish military campaign against Syrian Kurdish forces, but the suspension was lifted in May.

"Canada continues to be concerned by the ongoing conflict in Nagorno-Karabakh resulting in shelling of communities and civilian casualties," Champagne said. "We call for measures to be taken immediately to stabilize the situation on the ground and reiterate that there is no alternative to a peaceful, negotiated solution to this conflict."

Last week, Armenia recalled its ambassador to Israel, citing Israeli weapons sales to rival Azerbaijan. On Monday, Amnesty International said it had verified the use of Israeli-made cluster munitions by Azerbaijani forces.