Armenia has recalled its ambassador, claiming that Israel supplies its rival Azerbaijan with weapons. 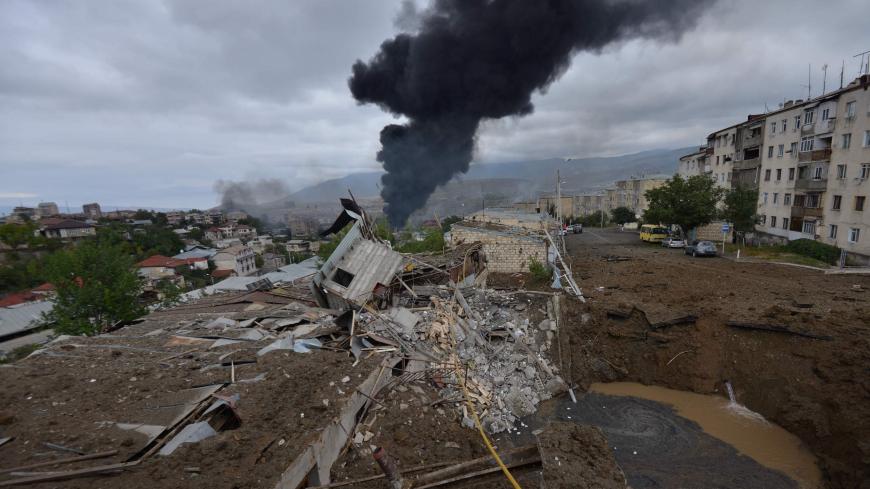 A view shows the aftermath of shelling during the ongoing fighting between Armenia and Azerbaijan over the breakaway Nagorno-Karabakh region, in the disputed region's main city of Stepanakert, on Oct. 4, 2020. - KARO SAHAKYAN/Armenian Government/AFP via Getty Images

Clashes between Armenian and Azerbaijani forces have been raging now for over a week, and Turkey, Russia and France have all gotten directly involved in the conflict. Now it seems that Israel is also being dragged into the regional dispute.

On Sept. 30, assistant to Azerbaijan President Hikmet Hajiyev told the Israeli news outlet Walla that the his country’s military has been using Israeli-made attack drones in the recent fighting. Hailing their effectiveness, he said, “Hats off to the engineers who designed it,” adding that his people “very much appreciate the cooperation with Israel, especially the defense cooperation.”

Drone footage released by Azerbaijan of a strike on a Nagorno-Karabakh artillery position appeared to show an Israeli drone. Another Sept. 30 report that has not been confirmed claimed that two mysterious cargo flights from Israel had landed in Baku. Reports from Oct. 2 contained a video of an Israeli LORA missile allegedly striking a bridge in Armenia.

On Oct. 1, Armenia recalled its ambassador to Israel for consultations over Israeli weapons sales to its enemy. Armenian Foreign Ministry spokesperson Anna Naghdalyan called Israel's practices "unacceptable" and condemned its “supply of ultra-modern weapons to Azerbaijan.”

Israel’s Foreign Ministry took its time responding. And when it did, the reaction was mild. The ministry did not deny the Armenian allegation. “Israel attaches importance to our relations with Armenia, and because of this sees the Armenian Embassy in Israel as an important tool for promoting the benefit of both peoples,” stated simply the ministry’s spokesperson. Israel avoided provoking Armenia further, but clearly the damage has been done.

Israel and Azerbaijan established diplomatic relations in April 1992. A year later, Israel opened an embassy in Baku. Late President Shimon Peres served as foreign minister at the time, and over the years invested great effort in deepening bilateral relations, including an official visit there as president in 2009. Israel’s defense establishment has also been deeply engaged with the moderate Muslim country neighboring Iran as a valuable and even indispensable partner. Cementing these relations, Jews of Azerbaijan origin have been very active over the past three decades in nurturing ties and developing all sorts of joint commercial ventures.

According to reports, the scale of commercial ties — mainly arms deals — between Israel and Azerbaijan is colossal. According to the Stockholm International Peace Research Institute, in 2016 arms exports from Israel to Azerbaijan added up to $250 million and $136 million in 2017. The institute noted that from 2015 to 2019, "A total of 60% of Azerbaijan’s arms imports came from Israel and 31% from Russia."

Another sphere of commercial ties is energy, with Azerbaijan exporting to Israel as much as 40% of its local petrol consumption. The Azeri petrol reaches Turkey via pipelines and from there it is shipped to Israel on boats. Azerbaijan’s state oil company SOCAR is reportedly interested in buying shares in the Israeli Ashdod refinery.

The strategic importance of Azerbaijan could explain Israel’s mild reaction to the Armenian accusations. Still, Jerusalem has been careful not to be publicly associated with the Azeri-Turkish camp. Jerusalem certainly does not consider Turkish President Recep Tayyip Erdogan a friend, and Israel maintains good diplomatic relations with Armenia. The Russian support of the Armenians also complicates things. Throughout his years as prime minister, Netanyahu has made a point of establishing good, even friendly ties, with Russian President Vladimir Putin. He does not want to ruin them.

Moscow has not yet scolded Jerusalem publicly for its support of Azerbaijan, but it could happen soon. France has taken up the Armenian side, with French President Emmanuel Macron alleging Oct. 2 that hundreds of Syrian jihadist fighters from Aleppo had passed through the Turkish city of Gaziantep en route for Azerbaijan, probably not the kind of news Israel wants to be associated with.

Armenian President Armen Sarkissian and Israel’s President Reuven Rivlin spoke today on the phone in an effort to restore dialogue between the two countries. Rivlin explained that Israel has a longstanding relationship with Azerbaijan, stressing that these relations and cooperation are not directed against any party.

Does this mean that Israel will continue its arms sales to Azerbaijan as the conflict with Armenia continues? It's hard to say. In any case, Armenians in Israel and elsewhere are deeply disappointed. Yerevan officially inaugurated its embassy in Tel Aviv just two weeks ago, certainly hoping for a different kind of bilateral relations. This afternoon, the Armenian community in Haifa is planning a demonstration against what it considers Israel’s silence.