Why Israel is staying silent on Azerbaijan-Armenia conflict

Despite its strong ties with Azerbaijan, Israel has kept silent on the conflict with Armenia out of wariness of raising the issue of occupation. 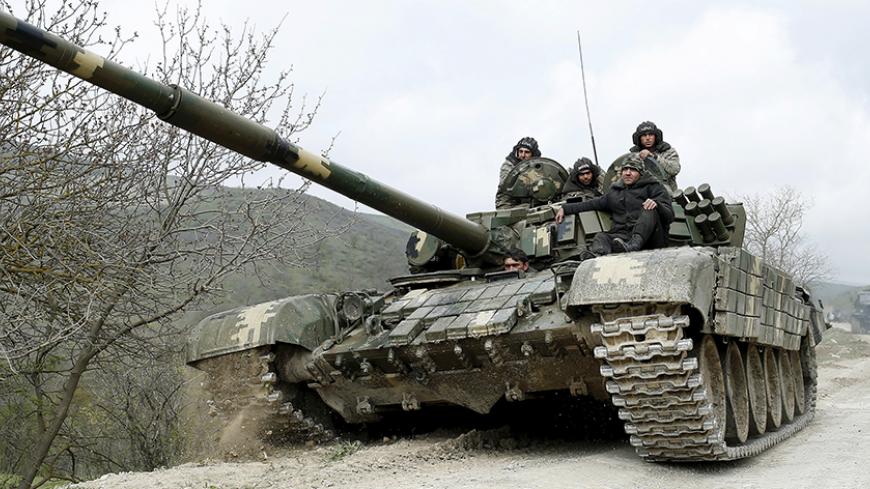 A tank of the self-defense army of Nagorno-Karabakh moves on the road near the village of Mataghis, Azerbaijan, April 6, 2016. - REUTERS/Staff

Azerbaijan and Israel are strategic allies. I had the privilege of laying the foundations for that alliance in 1993, shortly after Azerbaijan obtained independence for the second time. The first time was in 1918, when the short-lived Azerbaijan Democratic Republic became the first secular Muslim republic in history.

At the beginning of April, fierce fighting erupted between the Armenian and Azerbaijani armies in the contested territory of Nagorno-Karabakh. A tenuous cease-fire has since been declared. As in any region entangled in a complex web of international interests, the international community is expected to play a major role in the short- and long-term future of this strip of land. Now, however, when Azerbaijan needs all the diplomatic help it can muster, Israel is not rushing to its aid.

The alliance between the two countries has a firm basis in geopolitical realpolitik. Azerbaijan takes special care to maintain its status as a secular state, while its two large neighbors, Turkey and Iran, are best characterized as Islamist regimes with imperial ambitions. Iran especially has a hard time coming to terms with the fact that a country on its border, particularly one with a majority Shiite population, maintains a modern Western, secular lifestyle. Azerbaijan also takes care to uphold a cautious policy of neutrality toward the two regional powerbrokers, Turkey and Russia, even while Ankara and Moscow are engaged in a heated diplomatic, near military, conflict.

The significant Azeri minority in the northeastern corner of Iran is discriminated against in many different areas by the central government in Tehran. In contrast, there was never anti-Semitism in Azerbaijan, and many Jews there have reached prominent positions in the sciences, culture and society. The community of Azeri immigrants now living in Israel and the Jewish community that remains in Azerbaijan play an important role in preserving the good relationship between the two countries. Apart from neighboring Georgia, Israel is the secular democratic state closest to Azerbaijan, while Azerbaijan is one of a tiny group of Muslim states that maintains friendly relations with Israel openly and unapologetically in various areas.

In the early 1990s, as the Soviet Union was disintegrating, war broke out between Armenia and Azerbaijan. The Armenians enjoyed significant Russian support, while the Azerbaijanis fought alone. When a cease-fire was achieved, Azerbaijan was forced to come to terms with the mountainous contested region of Nagorno-Karabakh having been seized by Armenia, along with seven other strips of land, together comprising fully one-fifth of its territory. About 1 million residents of these occupied lands were forced out of their homes and became displaced persons.

During the past 20 years, Azerbaijan, with the development of its vast oil and gas reserves, has become rich, and its army has grown stronger. According to published estimates, and a source at the Israeli Energy Institute, some 40% of Israel’s oil comes from Azerbaijan.

The strengthening of Azerbaijan’s military, however, has not brought it closer to taking back the territories conquered by Armenia. The international community finds the status quo convenient. Although Europe wants Azeri oil and gas, it will not lift a finger to advance diplomatic negotiations intended to end the conflict. The United States benefited from Azeri logistical support in its wars in Iraq and Afghanistan, but it is doing nothing to end the conflict, since it is clear to all that there can be no resolution without a return of territories. Meanwhile, Russia is interested in the continuation of the conflict. With a military outpost in Armenia, it has set itself up as the permanent mediator and is now considering stationing its own peacekeeping forces in the contested region. This would have the added advantage of increasing its military presence along the Turkish border.

Thus, international apathy allows for the continuation of the status quo. It is convenient for everyone, except for Azerbaijan. The number of incidents along the Armenia-Azerbaijan lines increased over the past year. On the Azeri side is a civilian population that has not left its homes. They are subjected to Armenian fire, which is sometimes aimed at them 100 or more times a day. It is a situation similar to what Israeli communities bordering the Gaza Strip experience, but in the Caucasus.

Earlier this month, Azerbaijan responded with offensive military action. After several days of battle, it was able to take certain strategic positions along the old cease-fire line. For the first time in 22 years, the status quo was challenged by military action, though the operation was limited in scope. The current cease-fire, brokered by Russian President Vladimir Putin, is tenuous at best and not expected to last long. It is also quite possible that now that Azerbaijan has proved its military superiority, there is a chance for real diplomatic negotiations that could lead to an agreement between the two countries.

The international community has considerable influence when it comes to determining the direction that the current crisis will take. The most desirable outcome would be diplomatic negotiations based on a formula familiar to Israelis — land for peace. Armenia’s weak economy could stand to benefit from such an agreement. Improved economic relations with Turkey are just one important economic benefit that Armenia can be assured of as soon as it withdraws from the occupied Azeri territories. Meanwhile, Azerbaijan needs much more robust diplomatic support than it is receiving today.

Ostensibly, a call from Israel for negotiations ending in an agreement would have particular validity. After all, Israel returned Sinai Peninsula in exchange for peace with Egypt. So why is Jerusalem silent? Why won’t the government of Israel offer at least a word in support of this important ally?

The reason for its silence lies in an embarrassing equivalence that cannot be ignored. Politically, Israel’s insistence on maintaining the status quo in the West Bank is actually similar to the Armenians' position. Here too, when it comes to ending the conflict, nationalist populism supersedes national interests. When the status quo familiar to Israelis is decades of military occupation coupled with international apathy, and when no one instigates a diplomatic initiative, the use of force is the only means of bringing about change. What the Israeli government is trying to avoid is the uncomfortable comparison between Nagorno-Karabakh and the West Bank.