The Islamic Republic is to pay families of the victims of the Ukrainian flight it downed earlier this year. But the payment has been secured not from the Islamic Revolutionary Guard Corps responsible for the missile attack but from an emergency fund meant for the public interest. 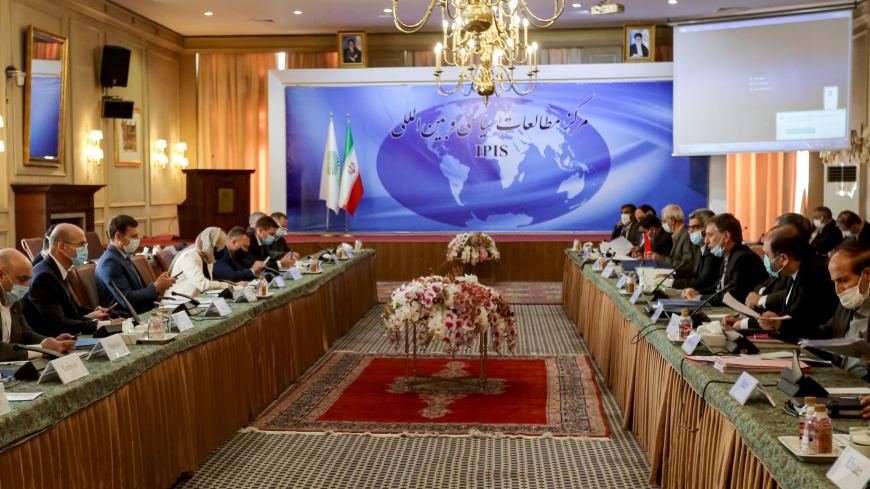 (L to R) delegations from Ukraine and Iran meet in Tehran, Iran, on Oct. 19, 2020, for the second round of talks on compensation for the families of victims of Iran's January downing of Ukraine International Airlines Flight 752. - ATTA KENARE/AFP via Getty Images

The Iranian government says it will tap into its National Development Fund  to pay compensation to the families of the victims of a downed Ukraine International Airlines flight. The jetliner crashed outside the capital, Tehran, in January. None of the 176 people on board survived the missiles fired by the Islamic Revolutionary Guard Corps (IRGC).

The exact amount of the compensation for each individual has yet to be specified, an issue that remains a sticking point in negotiations between the Iranian side and Ukraine, the country that owned the aircraft. As the majority of the victims were Iranian Canadians, Ottawa has also been involved in the settlement talks.

Iran’s National Development Fund is meant to be reserved for disasters and can only be tapped under the orders of Supreme Leader Ayatollah Ali Khamenei. In April, Khamenei permitted access to $1 billion from the fund to tackle the coronavirus pandemic. Months later, however, the country’s health minister complained that only a small slice had reached the underbudgeted medical system.

The compensation allocated for flight victims has been added as an item to the fund's payment list for the next Iranian fiscal year, meaning that the payment will not reach the victims’ families before March 21 at the earliest.

The government’s decision to use the national fund has drawn the ire of some who argue that the IRGC, as the sole force behind the plane crash and as a financial empire unto itself, should loosen its own purse strings to pay for the destruction it caused. Among those critics is Hamed Esmaeilion, a Canada-based Iranian novelist who has sought to bring to account those who brought about the deaths of the plane's passengers, who included his wife and 9-year-old daughter.

Esmaeilion, who is also the spokesman for the families of the victims, slammed the Islamic Republic for deciding to “pick from Iranian people’s pockets … to compensate for IRGC crimes and its shooting at children.” Nearly 20 children were among the victims.

The Ukraine plane tragedy was a closure of sorts to an extremely tense episode between Iran and the United States. It began with the US killing of top Iranian military commander Qasem Soleimani outside Baghdad International Airport. The death triggered retaliation from the IRGC, which targeted Ain al-Asad airbase run by US forces in Iraq. The missile attack, which Iran described as a “harsh revenge” against the United States, left no American dead, although many US troops did suffer traumatic brain injuries.  Iranian forces said that in anticipating US reciprocation for the air base attack, they mistook the Ukrainian plane for an invading American cruise missile.

The same amount of money — 200 million euros ($238 million) — that has been allocated for the plane crash compensation was released last year from the same fund to pay for the IRGC’s revenge project.

“They attacked Ain al-Asad for the ‘harsh revenge’ but they only demolished a few warehouses,” wrote Iranian activist Hosein Razzagh. “On the same night … they killed passengers [because] they take their harsh revenge on their own people, either with missiles or by stealing from the public fund.”