Iranian officials claim they are working with Ukrainian authorities to investigate the plane crash in Tehran but claim US accusations that they shot the plane down themselves is a “media war.” 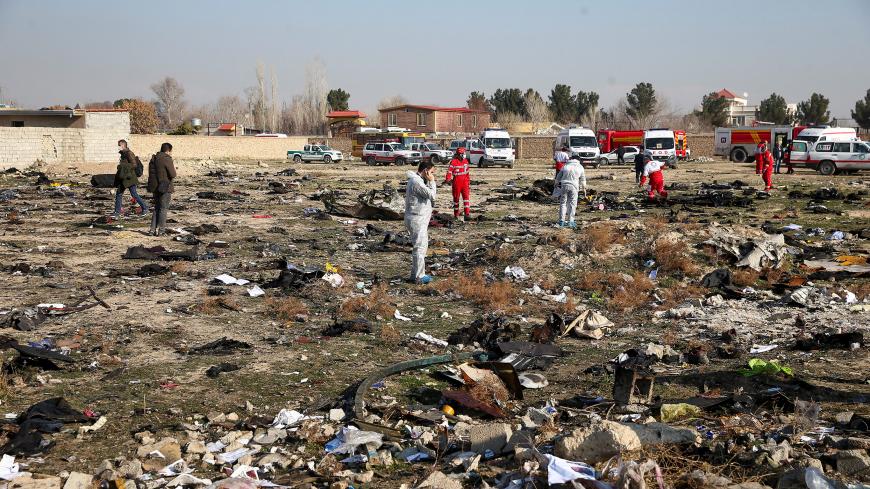 A rescue team works among the debris of a plane belonging to Ukraine International Airlines that crashed after takeoff from Iran's Imam Khomeini International Airport, on the outskirts of Tehran, Iran, Jan. 8, 2020.

Iranian officials and media outlets have denied claims they shot down a Ukrainian passenger jet, killing 170 people, and said they are currently cooperating with other countries in their investigation of the incident.

Abbas Mousavi, spokesman for Iran's Foreign Ministry, said Iran is following “international standards” in their investigation. He added that officials from both Ukraine, which owned the plane, and Boeing, the plane's motor manufacturer, have been invited to participate in the investigation. The National Transportation Safety Board, an independent US government agency responsible for investigating civil transportation accidents, said they had received formal notification from Iran and have assigned a representative to investigate the crash.

Ukraine International Airlines Flight 752, which was carrying mostly Iranians and Canadians but also Ukrainian, Swedish, Afghan, German and British citizens, crashed the same night Iran launched more than a dozen ballistic missiles into two Iraqi airbases housing US forces in retaliation for a US strike that killed Islamic Revolutionary Guard Corps Quds Force commander Qasem Soleimani. Western media outlets reported that intelligence officials believe Iran had accidentally shot down the plane with a surface to air missile. Canadian Prime Minister Justin Trudeau, whose country lost 63 citizens, mostly Iranian-Canadians, reiterated the claim that Iran had shot down the plane based on Canada’s intelligence and intelligence offered to him by allies.

Mousavi said Iran welcomes experts from countries who lost citizens on the flight. He also said he welcomed any intelligence that the Canadian government could offer. President Hassan Rouhani’s deputy director of communications tweeted that the presidents of Iran and Ukraine spoke on the phone and had agreed to form a committee to investigate the crash, which will be led by the country’s foreign ministers.

Head of Iran’s Civil Aviation Organization Ali Abedzadeh said that as a member of the International Civil Aviation Organization (ICAO), they will follow its rules; that is why a committee has been formed. Regarding media claims about Iran denying others access to the black box, Abedzadeh said that according to ICAO regulations, the country in which the accident took place will determine how the information in the black box is accessed. He said if Iran needs help accessing the black box, they will ask Ukraine as the owner of the plane. France, who made the Boeing 737 motor, and the United States, which designed the plane, must also offer assistance if Iran requests it, according to the ICAO.

Abedzadeh said Iran’s air space was safe during the time of the accident, arguing that “when the accident occurred, nine planes were in the periphery of Imam Khomeini International Airport and [dozens] of other planes were flying at 25,000 feet.”

Other Iranian officials called the claim by Western intelligence officials that Iran shot down the plan “psychological warfare.” Rouhani's media adviser, Hessameddin Ashna, tweeted in Persian, “A warning is given to Iranian nationals working in Persian language media about participating in the psychological warfare related to the Ukrainian airplane.” He added, “Refrain from cooperating with Iran-haters.” After being criticized online for issuing the “warning” to journalists, he clarified in a follow-up tweet, “Do not be mistaken, a warning is never a threat. It is an effort to awaken consciousness to remain Iranian and in this media war to defend your country and the truth. Do not increase the pain of the families.”

Ashna then referred to the claims that Iran was behind the shooting down of the plane as a “counter-attack by the Iran-haters after the first slap.” The reference to “first slap” is in reference to Supreme Leader Ayatollah Ali Khamenei’s coining of the missiles strikes as “a slap” against the United States.

Iranian media also interviewed aviation experts who tried to cast doubt on the claims that the plane was shot down. Tasnim News Agency, which is linked to the Islamic Revolutionary Guard Corps, interviewed a military and defense expert who said American claims regarding the incident are “technically ridiculous.” The Tasnim article claimed the United States pushed their theory that Iran shot down the plane because of the “humiliation” over being bombed at the Ain al-Asad base in Iraq. In a different article, Tasnim News interviewed well-known Iranian pilot Houshang Shahbazi to discuss the incident. Shahbazi said that had a plane been shot in the air, its debris would have spread across miles and the pilot would not have tried to turn the plane around and return to the airport.