Iran expects US to return to nuclear deal without conditions

Iran’s President Hassan Rouhani said the era of maximum pressure is over. 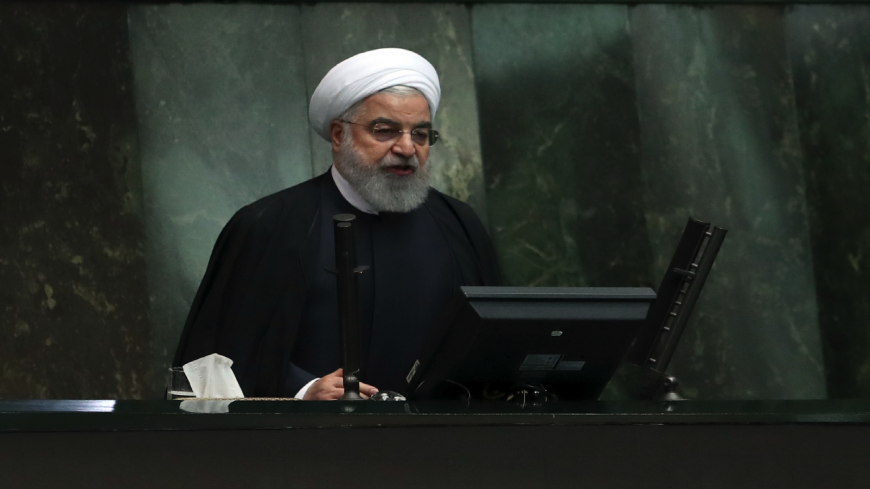 Iran's President Hassan Rouhani delivers a speech presenting the Islamic Republic's new budget for the financial year starting late March 2020, in Tehran, on Dec. 8, 2019. Rouhani described it as a "budget of resistance" against crippling sanctions imposed by Iran's arch-enemy, the United States. - STR/afp/AFP via Getty Images

President Hassan Rouhani said today that he believes the era of maximum pressure on Iran is over.

“There are signs from America to Europe that show the world has understood that maximum pressure will not yield results, and it is coming to an end,” Rouhani said, speaking via videoconference to mark the inauguration of several national projects. The term "maximum pressure" has been used to describe US policy toward Iran. The Trump administration exited the 2015 nuclear deal known as the Joint Comprehensive Plan of Action (JCPOA) and reapplied US sanctions on Iran. The goal, according to the Trump administration, was to have Iran sign a new agreement and also comply with a list of 12 demands, which included different issues such as Iran’s missile program and foreign policy.

Reentry into the nuclear deal will not be easy. There will be immense pressure on the future Biden administration to use the leverage of sanctions to request more from Iran. Given the number of crises that the incoming administration will be dealing with, it makes sense that they will not be eager to use too much political capital on the issue. As a result of the US withdrawal from the JCPOA and the reapplication of sanctions, Iran reduced its commitments to the JCPOA. Iran has said it is open to re-entering the deal if the United States drops the nuclear-related sanctions.

Ali Rabiei, spokesman for the Rouhani administration, said that Iran expects the United States to return to the nuclear deal without new conditions. “Our clear expectation from the new officials in the White House is the return to previous commitments without conditions,” Rabiei said. He added that the first step would be “the removal of sanctions.” He has also previously discussed the United States compensating Iran for the damages it has endured during this time. Due to US sanctions, Iran has had a hard time selling its oil and has lost considerable revenue.

While Rouhani and his administration are touting the loss of Donald Trump as a sign that the maximum pressure campaign did not work, other conservatives have been more subdued in their reaction. Kayhan newspaper, whose editor is chosen by Supreme Leader Ayatollah Ali Khamenei’s office, wrote in its headline, “We are neither terrified of Trump staying nor excited for Biden’s arrival.” The comment was based on the statement made by Deputy Foreign Minister Abbas Araghchi, who was involved in the nuclear talks. Araghchi was likely trying to temper some of the expectations given the number of hurdles standing between the United States and Iran.

Regardless of what happens with a new Biden administration, there will be many challenges between Iran and the United States. If negotiations do take place, they will take place within the JCPOA framework and include the other P5+1 members of that agreement.