Rouhani claims US sanctions will pass

Iranian President Hassan Rouhani told Japanese and Indian officials he believes that the United States will soon have no choice but to end its pressure campaign against Iran. 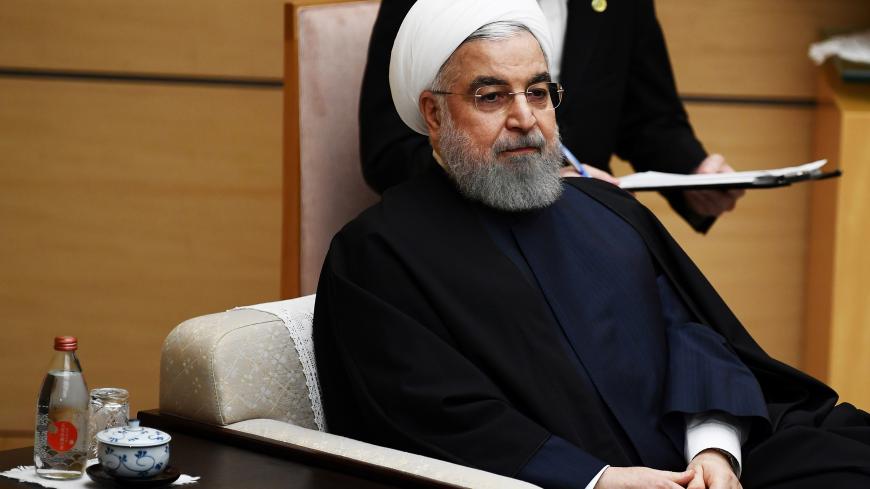 Iranian President Hassan Rouhani has suggested his country believes the US economic sanctions and pressure on the Islamic Republic will come to an end soon.

During a Dec. 23 meeting with the Indian foreign minister, Rouhani discussed the importance of increasing bilateral trade in the face of US sanctions. “Under the current situation with unilateral American sanctions against nations, we have to work to protect and continue relations and cooperation between us,” Rouhani said. He continued, “Certainly this will pass and sooner or later America has no choice, either before or after its presidential election, to stop its maximum pressure campaign against Iran.”

Rouhani made similar comments in a Dec. 22 meeting with Japanese officials in Tokyo. “Undoubtedly, America’s illegal sanctions cannot continue and the Americans have no choice but to one day let go of this path, which has no benefits and is full of costs.”

When President Donald Trump took office, he vowed to undo the Joint Comprehensive Plan of Action (JCPOA) struck between Iran and the five permanent members of the UN Security Council plus Germany. As part of the 2015 deal, Iran reduced its nuclear capabilities in exchange for nuclear-related sanctions relief. With the US exit in May 2018 and the reapplication of sanctions, Iranian oil exports have plummeted and many European countries have refrained from investing in Iran due to fear of secondary US sanctions.

Trump says that the “maximum pressure” strategy is designed to force Iran to sign a better deal. Tehran has said that it will only engage in talks with the United States only after Trump reenters the nuclear deal, a point Rouhani reiterated during his talk in Japan. “That we should talk with the US about our issues, we have no problems with, other than that they have to return from the mistaken path that they have taken for the last year and a half,” Rouhani said. “We cannot give the wrongdoer an award and at the same time, if the wrongdoer wants to make up for its actions, we cannot close the path to them.”

In response to the US exit from the JCPOA, Iran chose to incrementally reduce its nuclear commitments rather than reciprocate equally by resuming its nuclear activities to pre-JCPOA levels. The reductions in commitments have taken place in two-month increments, primarily to pressure Europe to live up to its end of the JCPOA through trading with Iran and continuing to buy its oil. Europe had previously set up INSTEX framework to facilitate trade, but it cannot yet handle Iran's goal volume of oil sales.

Iran is currently on its fourth step in commitment reduction. The fifth step is scheduled to take place in early January. Javan newspaper, which is close to the Islamic Revolutionary Guard Corps, reported Dec. 23 that while in Japan, Rouhani issued his “most serious threat … to exit the JCPOA given the continued violations and pact-breaking by the opposing side.” Some of the options Javan holds that the Supreme National Security Council should consider for the fifth step are resuming 20% enrichment and exiting the Additional Protocol.