Iranian officials said they will continue to reduce their nuclear commitments under the JCPOA. 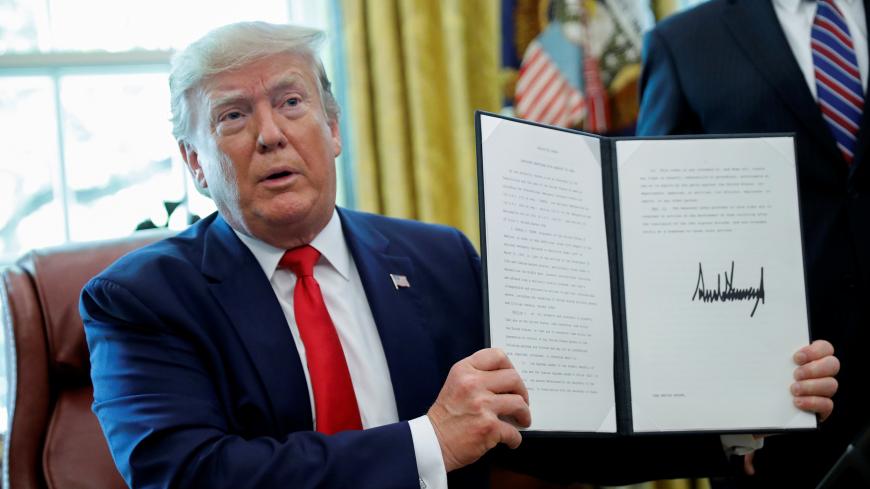 US President Donald Trump displays an executive order imposing fresh sanctions on Iran in the Oval Office of the White House in Washington, US, June 24, 2019. - REUTERS/Carlos Barria

President Donald Trump said the United States would introduce new sanctions on Iran today in response to its downing of a US drone in the Persian Gulf. Tensions have increased to new heights after Trump claimed that he decided against a military strike as a potential response for the downed US drone. Iran claims the drone was in its territorial waters, while the United States denies this. Since exiting the Joint Comprehensive Plan of Action (JCPOA) in May 2018 and reimposing sanctions, the United States has been locked in a small-scale confrontation with Iran.

Both in public and behind closed doors, Iranian officials are signaling that they will not budge to the US “maximum pressure” strategy. According to Reformist parliamentarian Fatemeh Saeidi, Iran’s Foreign Minister Mohammad Javad Zarif spoke to the Hope fraction parliament members about regional events. Saeidi said that Zarif was sanguine in the face of new US sanctions, as he said, “With all of our strength and ability we will stand up against the enemy’s sanctions and threats and our resistance will continue.”

Zarif also discussed the impact of sanctions during a speech in honor of the upcoming International Day Against Drug Abuse and Illicit Trafficking, which is on June 26. “The implementation of sanctions and America’s unilateral actions and their entrance in the arena of war and economic terrorism against the people of Iran has become an obstacle in international cooperation, especially in the field of [combating] drugs,” Zarif said.

“America and some Western countries are directly responsible for the consequences and the disorder in the fight against drugs,” he said. The vast majority of the world’s opium is produced in Afghanistan, with much of it traveling through Iran and ultimately to Europe. Iranian authorities have long felt underappreciated for the financial sacrifices they have made, as well as the loss of lives endured, to prevent the smuggling of drugs to Europe.

Secretary of State Mike Pompeo and US pointman on Iran Brian Hook said on June 24 that they are ready to talk to Iran and can strike a deal if the United States' 12 demands are met. The 12 demands cover Iran's nuclear program and missiles, as well as its regional policies. Trump tweeted today that the "US request for Iran is very simple — No Nuclear Weapons and No Further Sponsoring of Terror!"

Iran has remained steadfast in its position that if the United States wants talks, it should reenter the JCPOA. The Iranian president's adviser, Hesameddin Ashena, tweeted June 23, “We say, we neither seek war nor deserve to be sanctioned. But we see sanctions as two sides of the same coin. America’s claims for negotiations without preconditions with the continuation of sanctions and threats is not acceptable. If you want something more than the JCPOA you have to give more than the JCPOA, with international guarantees.”

As the United States prepares more sanctions, Iran has prepared to continue to reduce its nuclear commitments under the JCPOA — unless Europe is able to secure financial transactions that are not subject to US sanctions. Deputy Foreign Minister Abbas Araghchi met with Andrew Murrison, the British minister of state for the Middle East, on June 23. Iranian media reported that Murrison said Europe is committed to the JCPOA and implementing the Instrument in Support of Trade Exchanges, or INSTEX, the vehicle meant to facilitate trade between Iran and Europe.

Araghchi said that Europe's inability to abide by the JCPOA is due to "their will" and not their ability. “Iran’s decision to reduce its commitments under the JCPOA is a national decision," he said, "and it is nonreturnable and the Islamic Republic of Iran will continue on this path until its demands are met.”