In Iran's media review today, Foreign Minister Mohammad Javad Zarif said that the United States has left the nuclear deal and plans to reenter are "idiotic." 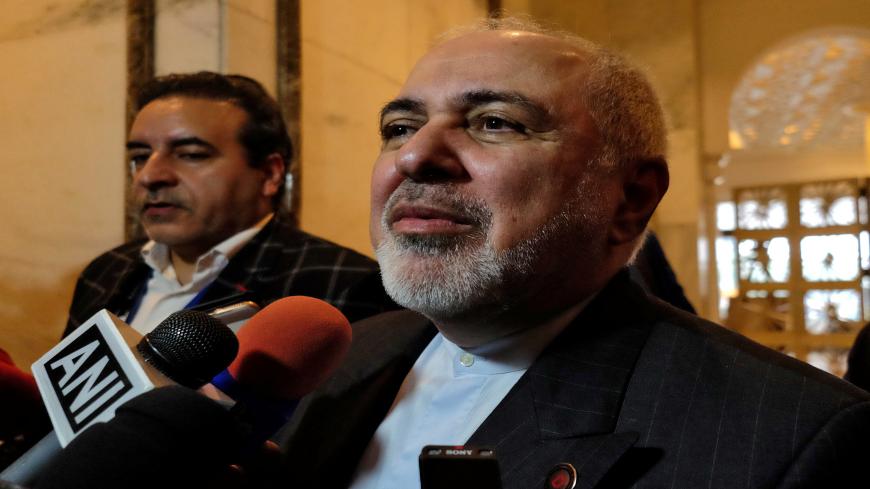 Iran's Foreign Minister Javad Zarif speaks with the media on the sidelines of a security conference in New Delhi, India, Jan. 15, 2020. - REUTERS/Alasdair Pal

Iran's foreign minister has dismissed US attempts to reenter the Iranian nuclear deal in order to apply sanctions on Iran. “The plan of the very idiotic claims by US officials are nothing new,” Mohammad Javad Zarif told reporters May 14.

He continued, “From those who recommend drinking disinfectant to be clean and not get the coronavirus, it is not unlikely that an agreement that they exited and in a statement wrote that they officially are ending their presence and participation in the JCPOA for them to now say they are members of the JCPOA.” The JCPOA stands for the Joint Comprehensive Plan of Action, otherwise known as the Iranian nuclear deal, which was signed by Iran and five permanent members of the United Nations Security Council plus Germany in 2015.

The United States exited the nuclear deal in May 2018 and reapplied US sanctions. Iran gradually reopened parts of its nuclear program after the US exit and reapplication of US sanctions as a tactic to pressure Europe to not abide by US sanctions. A number of European countries created the Instrument in Support of Trade Exchanges, or INSTEX, as a means to facilitate trade and economic transactions with Iran that would not violate US sanctions. Yet the mechanism has not yet been able to handle the volume of trade for Iran to sell its oil.

US special envoy for Iran Brian Hook wrote in a Wall Street Journal op-ed today and confirmed publicly for the first time the US plan to reenter the nuclear deal in order to trigger UN sanctions that would ban arms sales to Iran. The sanctions would need nine votes by the Security Council and no vetoes from the permanent members. Russia has already stated publicly they are opposed to the new sanctions on Iran.

On the US decision to leave the JCPOA, Zarif said, “The JCPOA is a strong document and in the future the Americans will see that what they did will be to their own detriment.”

Iran continues to grapple with the coronavirus pandemic as it reopens parts of the country. After a brief week in which the number of new cases declined, Iran’s numbers have increased again. In the last 24 hours, Iran reported 1,808 new cases, bringing the total number of confirmed cases to over 114,000, and 71 deaths, taking the total number of deaths to 6,854. While some provinces have improved and opening parts of the economy, others have seen numbers climb, such as Khorasan that may need additional preventive measures in order to bring its numbers back down.