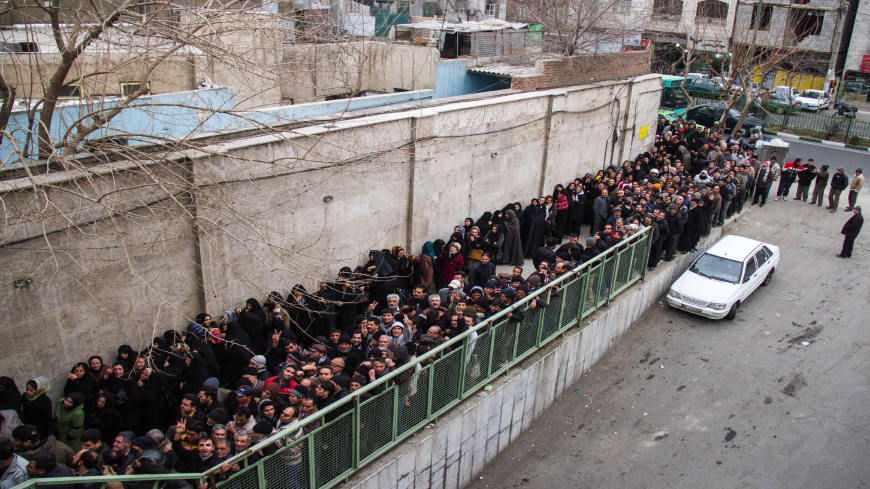 Recently released figures on the cost of essential items for lower-income segments in Iran show that the rise in the price of these items — predominantly food products — has indeed put a lot of pressure on vulnerable groups in the country.

During the period from March 2019 to September 2020, Iranians have witnessed prices of goods skyrocket from 55% to more than 100%, according to a study published in October by the Institute for Trade Studies and Research, a think tank under the Ministry of Industry, Mine and Trade. For instance, pasta, imported rice and legumes have increased in price by more than 100%. Tea, sugar, Iranian rice, eggs and dairy products have seen prices rise between 60% and 91%. Of note, the point-to-point inflation rate for the seventh month of the Iranian year (Sept. 23-Oct. 22) stood at 41.4%, according to a report posted by the Statistics Center of Iran, whereas monthly inflation touched 7% in the same period, experiencing a 3.4 percentage points rise in comparison with the previous month.

To calculate the minimum amount of living expenses for the current Iranian year, the representatives of the government, employers and the workers at the Supreme Labor Council agreed on the figure 4,940,000 tomans ($187) in March. This is calculated annually for a four-member family. Although labor representatives sought, in accordance with the provisions of Article 41 of the Labor Law, to obtain the favorable opinion of employers and government agents to bring workers' wages closer to the cost of living, minimum wages did not increase accordingly to fill the gap in 2020-21. Thus, the gap between wages and the cost of living for workers rose to 2,030,000 tomans ($77) since the minimum wage was set at 2,902,000 tomans ($110) per month. However, a large number of the labor force, including women, is usually forced to accept wages below the minimum amount and work more than eight hours. They are even deprived of the same minimal support and protections as specified in the Labor Law.

Iran's national income last year (at constant prices in 2011) reached 393.9 trillion tomans based on the data available at the Central Bank of Iran's (CBI) website. This number shows a drop of 5.8% compared to the year 2018. This figure is the lowest recorded since 2005, according to the data currently available and provided by the CBI. In other words, in the last 15 years, the national income of Iranians has not changed. In fact, it has even tanked by about 28.9% compared to the beginning of the 2010s.

Also, the per capita income (PCI) of each Iranian last year at current prices was about 22.5 million tomans ($853). But to compare the PCI with other years, it is necessary to extract the effect of inflation from it. For this reason, national income data should be used at constant price. Considering Iran's population of 83 million last year, the PCI of every Iranian — using 1990 as the base year — decreased to 4.7 million tomans. The CBI has made national account data available since 2004. According to the available data, the PCI in 2019 was the lowest over the last 16 years. It dropped by more than 35% in the past year compared to 2011, being more than one-third of Iranians' income. Compared to 2004, this figure represents a whopping 17% drop.

Additionally, the Gini coefficient — the "measure of the distribution of income across a population" — shows that economic injustice has been steadily increasing in Iran. When President Hassan Rouhani's government took the helm of the executive branch in 2013, the income inequality index was about 0.3650. However, this increased to 0.4093 in 2018-19. According to Article 3 of the Law on the Sixth Five-Year Development Plan (2016-21), the index should stand at 0.34 by the end of the program. This is while the current figure for the Gini index is far from the set goal. Despite the fact that it was negligibly down, with a slight decrease last year registering at 0.3992, the widening gap between rich and poor won't be compensated with such small reductions.

Furthermore, the World Bank has calculated the basis for the world's extreme poverty line at $1.9 per person per day. It has also estimated daily income for upper-middle-income countries, including Iran, at $5.5. Based on the latter definition, it is evident that workers — constituting more than half of the country's population — are living below the standard as specified by the World Bank. According to the Ministry of Cooperatives, Labor and Social Welfare's Research Center, the number of those workers with social security insurance or working under conditions set in the Labor Law in the country was 14 million last year. This constituted 39 million of the entire population —almost 50% of Iran's population, including laborers' families. This is while the data excludes 3 million laborers from the calculation, as their data is not registered anywhere.

Mounting pressure to compensate for the drop in the purchasing power of society in the form of providing livelihood packages has led to the approval of the motion to grant electronic coupons or vouchers in the Iranian parliament. As a result, the government is obliged to distribute subsidies from the sale of its surplus assets with a credit ceiling of 30 trillion tomans ($1.1 billion). The motion is approved at a time while there are insufficient resources to cover the current state budget in the absence of meaningful government bond sales. Hence, pushing the government to provide the funds would easily translate into more money printing. This populist measure, given the 7% inflation rate just during the month of October, can threaten to raise inflationary pressures to new, pernicious levels. This initiative is, undoubtedly, expected to act counter-productively and hurt majorly the poor wage earners in the end.

Increasing income inequality and the impoverishment of individuals has many consequences, the least of which is creating the poverty trap and trapping the economy in a vicious cycle of continuous recession. Undoubtedly, the continuation of near-zero economic growth over the past decade is bound to further reduce the national per capita income. And this could lead to more unemployment for millions of Iranians, as businesses would be forced to operate below their expected capacity as sales drop significantly.

Politically, the consequences of rising poverty and economic injustice are probably apparent. The dramatic rise in crime and delinquency and perhaps the formation of protests in the ranks of November 2019 are among the likely repercussions.