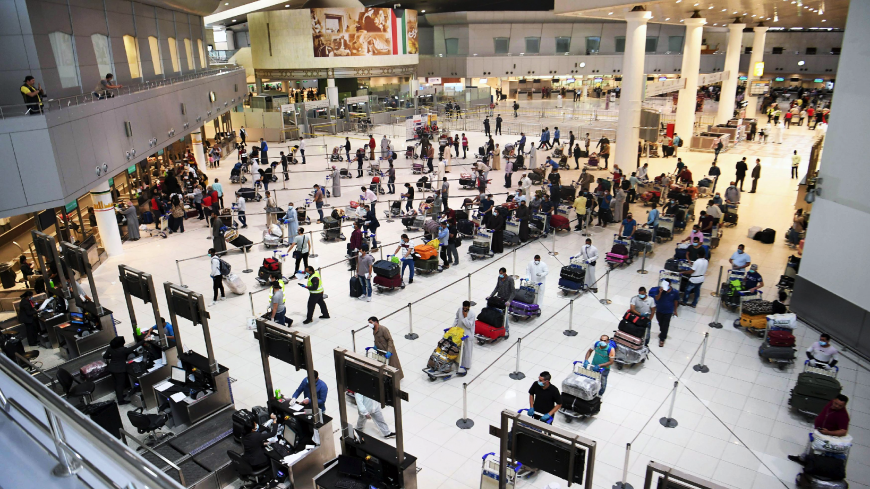 Egyptian citizens queue at Kuwait International Airport before boarding a repatriation flight to Cairo, in Kuwait City, on May 5, 2020. Kuwaiti authorities dispersed a "riot" by Egyptian workers who demonstrated May 4 to demand repatriation amid the coronavirus crisis, state media said. - YASSER AL-ZAYYAT/AFP via Getty Images

A correspondent in Egypt
November 5, 2020

CAIRO — The Egyptian Ministry of Manpower announced in an official statement Oct. 24 the dismissal of a senior official from his post and his referral for investigation, after he posted insulting statements to Kuwait on his personal Facebook page.

Assistant Minister of the Manpower Ministry Yasser Al-Sherbini posted comments on his page ridiculing the old age of the new Kuwaiti emir, Sheikh Nawaf Al-Ahmad Al-Jaber Al-Sabah, who is 83. Sherbini deleted his post after it stirred a social media buzz.

The Ministry of Manpower denounced Sherbini’s post as an offense against the state of Kuwait and its symbols. In a statement posted on its Facebook page Oct. 24, the ministry stressed that this incident has nothing to do with the Egyptian government, affirming the comments were made on a personal page. The ministry reiterated its keenness on the strong relationship between the Egyptian people and state and their Kuwaiti counterparts.

Meanwhile, the Kuwaiti Ministry of Foreign Affairs summoned the Egyptian ambassador to Kuwait, Tariq al-Qouni, on Oct. 23 against the backdrop of Sherbini’s comments.

In an official statement released by the ministry, Kuwaiti Minister of Foreign Affairs Khaled al-Jarallah called on Egyptian authorities to take legal measures against the posts made by the Egyptian assistant minister.

Jarallah relayed the state of Kuwait’s denunciation, resentment and rejection of such “insults by an official in the state,” noting that the Kuwaiti Foreign Affairs Ministry officially requested Egypt to take immediate legal measures against this official.

The incident comes a few days after an Egyptian female physician was brutally assaulted in Kuwait by a Kuwaiti patient. On Oct. 22, the Egyptian Ministry of Manpower said in a statement that it was in contact with the Egyptian national, who was beaten while performing her duty in a Kuwaiti hospital.

The Kuwaiti patient, who had come to the Fintas polyclinic for an ear examination, had jumped the queue for treatment. When the physician asked him to wait his turn, he started verbally and physically assaulting her in the examination room. The physician was left with several bruises and partial loss of her tongue.

Egypt and Kuwait have always maintained strong ties. Egypt helped Kuwait militarily and diplomatically to repel the aggression launched by the regime of former Iraqi President Saddam Hussein during the invasion of Kuwait in 1990.

Kuwait also backed Egypt during the tripartite aggression in the 1967 Six-Day War and also during the October War in 1973. Kuwait was one of the first Arab countries to send armed forces after the 1967 war to help Egypt, according to the State Information Service, a government body affiliated with the Egyptian presidency.

Samir Ghattas, a researcher in Arab relations and a member of the Egyptian parliament, said Egyptian-Kuwaiti relations have been stable over the past decades, but overt tensions between the two countries have recently surfaced, especially in the past few months.

Ghattas, who is also the head of the Middle East Forum for Strategic Studies and National Security, told Al-Monitor that the recent tensions between the two countries come amid recurring incidents of assault by Kuwaiti citizens against Egyptian workers in Kuwait.

“There is muffled anger between Cairo and Kuwait in light of the Kuwaiti assaults on Egyptians (in Kuwait). These incidents raise the ire of the Egyptian public opinion toward Kuwait,” he said. “Videos of such assaults have been going viral on social media. Video footage posted in September showed two Kuwaitis assaulting an Egyptian worker in a mall in Kuwait. A legal complaint was filed, and on Sept. 7, the Kuwaiti Ministry of Interior said an amicable settlement was reached and the case was closed.”

Ghattas also referred to another incident on July 27, when a Kuwaiti citizen slapped Tarek Ashour, a young Egyptian resident of Kuwait, at the Sabah Al-Ahmad cooperative supermarket. Ashour, a cashier at the supermarket, had asked the Kuwaiti national to wait in line, but he slapped Ashour in the face three times. The scene, caught on surveillance cameras, caused outrage among Egyptians on social media.

“These three infamous episodes of brutal assault have provoked Egyptians. They reveal the Kuwaitis’ mistreatment of Egyptian workers,” Ghattas said. “This is all the more true there have been growing calls in Kuwait to deport expatriate workers amid the outbreak of the coronavirus in the country.”

A diplomatic source at the Egyptian Ministry of Foreign Affairs told Al-Monitor on condition of anonymity, “These assaults and quarrels between Kuwaiti citizens and Egyptian workers in Kuwait do not mean that there is a diplomatic crisis between Cairo and Kuwait. These incidents will not disturb the longstanding fraternal and historical relations between the two countries.”

Noteworthy is that Egypt has not demanded Kuwait formally apologize for these incidents, while the Kuwaiti state did not issue any official statements in this regard.

The source said Kuwait greatly appreciates Egypt and Egyptians and is taking the standard legal measures followed in such attacks. “The recurrence of attacks on Egyptians does not represent a phenomenon and does not express a systemic approach by Kuwaitis against Egyptian expatriates. These individual incidents can happen between persons of any nationalities inside Kuwait or in any other country.”

He added, “More than half a million Egyptians work in Kuwait. Quarrels are bound to take place between citizens and workers from time to time. Egyptians are the second largest expat community in Kuwait. Our expatriates have been treated with great respect and appreciation there, and Kuwait has not deported Egyptians as is rumored.”

According to the latest statistics published by the Ministry of Manpower at the end of 2019, the number of Egyptians in Kuwait has reached 671,000.

While the case of the Egyptian doctor has yet to be settled, and although the assaults against Egyptians in Kuwait have been resolved, some people see this as insufficient action taken against what they deem a growing trend, while the Egyptian official who criticized Kuwait on Facebook was immediately dismissed from his post.

The source refused to comment on Egypt’s failure to appropriately react to such incidents. He concluded, “The law must be enforced in all cases, regardless of the parties to the conflict, whether they are expatriate workers or state leaders.”