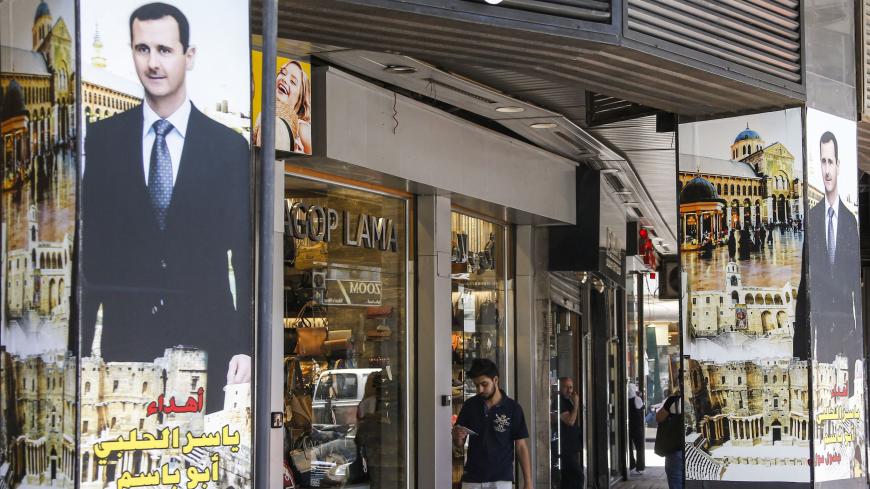 A man walks past window shops while nearby pillars are adorned with posters showing Syrian President Bashar al-Assad superimposed over Damascus' historic Umayyad mosque, in al-Salihiya district of the capital Damascus on June 10, 2020. - LOUAI BESHARA/AFP via Getty Images

Syrian President Bashar al-Assad said his country’s deteriorating economy can be explained by the billions of dollars of Syrian deposits he said are tied up in cash-strapped Lebanese bank accounts.

Assad estimated that Syrians hold some $20 billion and $42 billion in Lebanon’s banks, which have imposed tight restrictions on foreign currency withdrawals in the past year.

“This figure for an economy like Syria is terrifying,” he said during a state-sponsored fair in Damascus on Wednesday, according to the official SANA news agency. “It’s the money they put in Lebanese banks and we paid the price. This is the core of the problem that no one talks about."

The Syrian economy, already ravaged by years of war and the regime’s own mismanagement, is in tatters. The currency crashed to an all-time low this June, causing soaring food prices, shortages of basic commodities and rare protests in government-held Syria.

The economic crisis is just the latest hardship for Syria’s people, 83% of whom live beneath the poverty line. Residents of rebel-held northwest Syria, where some 2.8 million people rely on humanitarian aid to survive, are particularly vulnerable.

Syria’s currency woes can be at least partially attributed to the financial meltdown in Lebanon, where many Syrians stash their money. Brought on by decades of government corruption and overspending and accelerated by the deadly explosion at Beirut’s port in August, Lebanon’s currency has lost 80% of its value since last fall. The central bank’s dollar reserves are nearly depleted.

The economic crisis — Lebanon’s worst since its 1975-1990 civil war — has caused a major drop in remittance flows into Syria and forced banks worried about capital flight to put restrictions on withdrawals.

Pro-regime media outlets often blame US sanctions for Syria’s economic turmoil. In June, the State Department issued its first round of targets under the Caesar Act, which aims to choke off Assad’s financial lifelines by sanctioning foreign persons or companies that do business with Damascus.

But Assad said the latest American sanctions were not the cause, saying, “The crisis began before the Caesar Act and years after long-imposed Western sanctions.”