New sanctions imposed by the US Treasury Department aim to deny the Iranian government funding. Iran says the move will hurt its ability to pay for medicine and food. 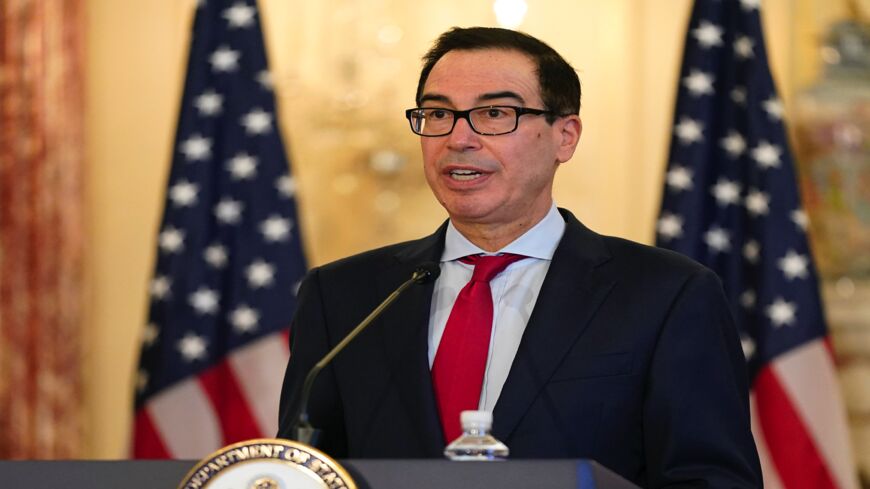 Treasury Secretary Steve Mnuchin speaks at a news conference during the announcement of the Trump administration's restoration of sanctions on Iran, on Sept. 21, 2020, at the US State Department in Washington, DC. - PATRICK SEMANSKY/POOL/AFP via Getty Images

The United States announced new sanctions on Iranian banks on Thursday. Iran’s government said the measures will hurt its citizens.

The Department of the Treasury sanctioned 18 Iranian banks based on Executive Order 13902, which enables the US government to sanction sectors of the Iranian economy in order to deny the Iranian government funds. The US reasoning is that the money would be used to fund terrorism, Iranian proxies in the Middle East and Iran’s nuclear program. Iran denies that it is building a nuclear weapon.

“Our sanctions programs will continue until Iran stops its support of terrorist activities and ends its nuclear programs,” said Secretary of the Treasury Steve Mnuchin in a press release.

The sanctions designated Iranian banks the department described as “major.” Any assets the banks have in the United States can now be blocked. Anyone doing business with the banks could also be subject to legal action, according to the department.

The United States already maintains a variety of sanctions on Iran. The measures aim to deter Iran’s alleged pursuit of a nuclear weapon and its support for proxies that clash with the United States and its allies in Iraq, Lebanon and elsewhere.

The sanctions have had negative effects on Iran’s economy. Iran’s currency dipped to its lowest value ever this month amid the sanctions and the rampant COVID-19 pandemic in the country.

Mnuchin said the new sanctions do not bar humanitarian assistance from reaching the Iranian people. However, Iranian Foreign Minister Mohammad Javad Zarif said in a tweet that the new sanctions will hinder Iran’s ability to pay for food and medicine.

“Conspiring to starve a population is a crime against humanity,” said Zarif.

The decision may lead to new tensions between the United States and Europe on Iran. The designation of the banks could lead to penalties for European banks doing business with Iran that was previously allowed, according to The Associated Press.

The United States already differs from its European allies on the issue. The United Kingdom, France and Germany remain party to the Iran nuclear agreement that the Trump administration withdrew from in 2018. The three European states have opposed US efforts this year to reimpose sanctions on Iran that the 2015 deal removed.