COVID-19 concerns may keep Emirati diplomats in the airport during their first official visit to Israel, which is experiencing an outbreak. 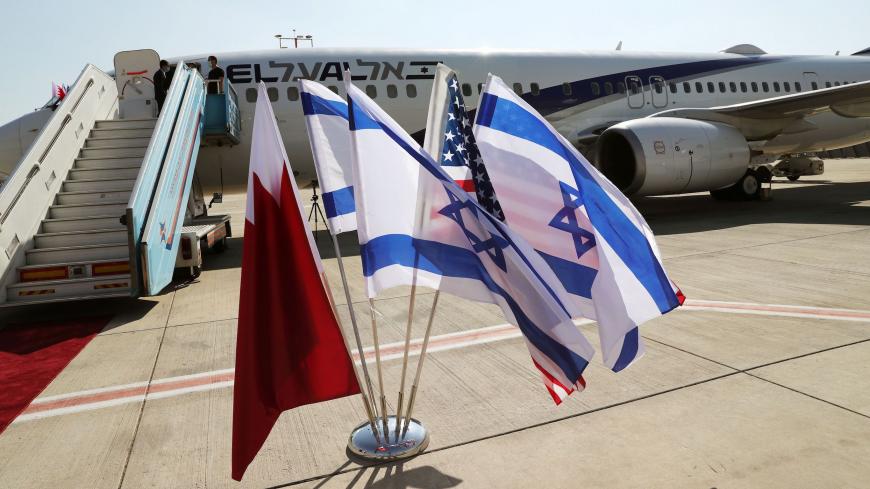 The Bahraini, Israeli and US flags are picture in front of El Al plane ahead of the flight to Bahrain's capital Manama at Israel's Ben Gurion Airport near Tel Aviv on Oct. 18, 2020, after the two states reached a US-brokered normalization deal. - RONEN ZVULUN/AFP via Getty Images

The first visit by the United Arab Emirates to Israel may be held in the airport due to the COVID-19 situation.

Israel and the UAE formally established diplomatic relations in September at the White House. Shortly before, Israeli diplomats made their first ever official visit to Abu Dhabi. The first meeting since they officially normalized ties took place in Germany last week. Next week’s visit would be the first official one by Emirati diplomats to Israel.

Shay made the comments to Tel Aviv’s 102 FM radio station. He said that keeping the meeting at the airport as opposed to a tour of the country would be a coronavirus-related precaution due to the recent outbreak in Israel, according to Reuters.

The arrangements of the visit have yet to be made.

“It’s possible that the meetings will be at the airport or close to it,” Shay reportedly said.

Israel is experiencing a major outbreak of COVID-19. In September, the government reimposed a full lockdown in the country, which was previously shut down from March to May. Businesses, schools and holy sites are now closed. On Sunday, some beaches, parks and other areas where close contact is avoidable will reopen, Reuters reported.

The UAE and Israel are continuing to further their ties. Companies in both countries have signed a number of agreements to strengthen economic relations since the normalization deal.