Palestinians continue to oppose the UAE's normalization with Israel, as UAE and Israeli officials sign agreement on visa-free travel in Tel Aviv today. 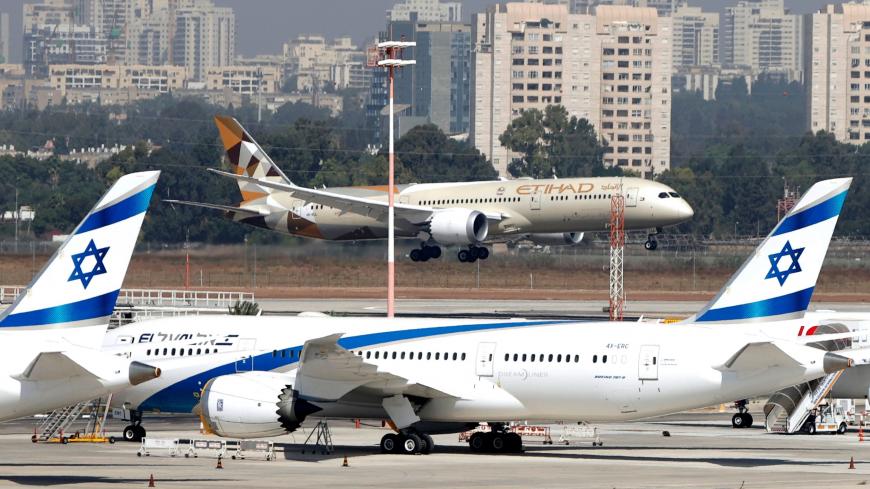 An Etihad Airways plane carrying a delegation from the United Arab Emirates on a first official visit lands at Israel's Ben Gurion Airport near Tel Aviv, on Oct. 20, 2020. - JACK GUEZ/AFP via Getty Images

A delegation from the United Arab Emirates made a historic visit to Israel today, as Palestinian leaders continue to be angered by the new relationship between Israel and the Gulf state.

Emirati Finance Minister Obaid Humaid al-Tayer led his nation's delegation to Israel, in the first-ever visit by UAE officials. Israel and the UAE signed a series of agreements, including on aviation and science. US Treasury Secretary Steve Mnuchin led the US delegation, which was received by Israeli Prime Minister Benjamin Netanyahu. The meetings took place at Ben Gurion Airport due to COVID-19 concerns, The Associated Press reported.

The two countries also agreed to establish visa-free travel between each other. Only Jordan in the Arab world allowed Israelis to enter without a visa before this, and several countries in the region refuse entry to any citizens of Israel.

Israel and the UAE formally established relations in September at the White House. Since then, both countries have signed a series of agreements pledging stronger economic ties.

The Palestinian leadership is opposed to the UAE’s normalization with Israel. Most of the international community considers the Palestinian territories — the West Bank and Gaza — as occupied by Israel. The political and military armed group Hamas controls Gaza internally while the West Bank is ruled by the Palestinian Authority in some areas, and the Israeli military in others.

One prominent member of the Palestine Liberation Organization, which leads the PA, said the UAE’s visit to Israel hurts Palestinians.

“The bilateral agreements that were announced today and the delegations that come and go, all of that offers the occupation strength to escalate its aggression and its crimes against the Palestinian people and increases its intransigence and arrogance,” said Wasel Abu Youssef, as reported by Reuters.

The PA has struggled to gain support for its position in the Arab world. In September, Palestine gave up its chairmanship of the Arab League after the organization declined to support a resolution condemning the UAE and Bahrain for their normalization deals with Israel.

Ties between Israel and the UAE are quickly strengthening. On Monday, the first commercial flight from the UAE landed in Israel.