What’s next for Erdogan after eastern Mediterranean and Caucasus?

Turkey's involvement in the South Caucasus conflict and decision to test the S-400 missile system show that Erdogan is continuing to embark on new adventures despite his recent failure in the eastern Mediterranean. 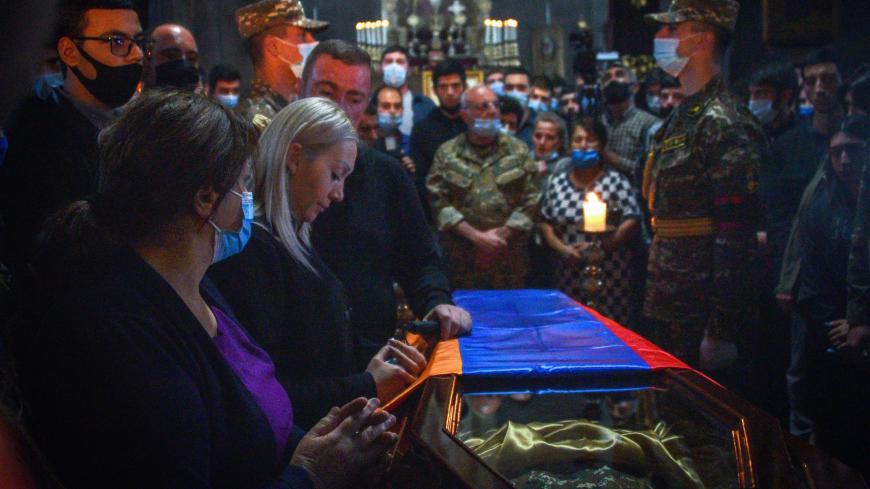 People attend a funeral service of an Armenian soldier who died in recent military clashes between Armenia and Azerbaijan over the disputed region of Nagorno-Karabakh, at a church in Yerevan, Armenia, on Oct. 9, 2020. Armenia and Azerbaijan held their first high-level talks the same day after nearly two weeks of fierce clashes over the disputed region. - KAREN MINASYAN/AFP via Getty Images

During his visit to Turkey’s staunch and perhaps only Arab ally Qatar on Oct. 8, Erdogan gave an interview to the Qatari daily The Peninsula. “The issue of the Aegean and the Mediterranean is one that Turkey will never take a step back from. … Those who see our determination in the Eastern Mediterranean and realize that they cannot make our country step back with empty threats and blackmails have eventually paid heed to our calls for dialogue. We have, however, kept diplomacy channels open from the very beginning,” Erdogan said.

Someone without much knowledge of recent developments could easily, by listening to Erdogan and his foreign minister, come to the conclusion that Turkey’s belligerent eastern Mediterranean policy achieved its main goal: to bring Greece to the negotiating table.

However, despite Erdogan’s attempt to paint a picture of success, his gambit in the eastern Mediterranean has ended in failure. He backed off when his gunboat diplomacy was challenged by French President Emmanuel Macron and the threat of possible EU sanctions.

Erdogan’s eastern Mediterranean move was inspired by the expansionist “Blue Homeland” doctrine designed by anti-Western ultranationalist former naval officials. The current situation could be considered as a huge blow to Turkey’s foreign policy.

I ended my previous Al-Monitor article on Turkey’s belligerent stance in the eastern Mediterranean conflict as follows: “Erdogan’s decision to withdraw the Turkish ship from the conflicted area might only mark a respite until the end of the upcoming EU summit in a bid to dodge possible EU sanctions. After sanctions that could further damage the Turkish economy and his own chances of survival are averted, he may well revive his belligerent eastern Mediterranean policy.”

I made this assessment before the EU Summit on Oct. 1. According to the conclusions of the summit, the European Council offered a conditional carrot to Turkey. Ankara avoided the sanctions — probably thanks to Germany’s efforts — under the condition that Turkey stop its “illegal actions” and “provocative statements” regarding the eastern Mediterranean conflict.

“The European Council reiterates its full solidarity with Greece and Cyprus, whose sovereignty and sovereign rights must be respected,” the conclusions say.

The EU’s strategy has worked. Turkey has backed off in the eastern Mediterranean standoff, announcing its readiness to start negotiations with Greece without any conditions. Erdogan even had a long telephone conversation with Macron prior to the council’s meeting, only days after his verbal attacks on the French president.

It is no exaggeration to say that Erdogan’s belligerence in the eastern Mediterranean conflict has hit the EU wall and that his brinkmanship policy ended in failure. Neither the measured wording of the EU statement issued after the Oct. 1 summit nor the start of Turkey-Greece talks can conceal this.

The report illustrated that as long as Turkey remains a nationalist autocracy under the iron-fisted rule of Erdogan, Turkey's EU membership process will remain a pipe dream.

It underlined the chasm with Turkey in this respect with the following: “Turkey’s foreign policy increasingly collided with the EU priorities under the Common Foreign and Security Policy. Tensions in the Eastern Mediterranean region further increased in the reporting period as a result of Turkey’s illegal actions and provocative statements.”

It also indicated that the EU does not and will not recognize Turkey’s maritime delimitation treaty with Libya, which has been the linchpin of Turkey's “Blue Homeland” doctrine.

“The signing of a bilateral Memorandum of Understanding on the delimitation of maritime jurisdiction areas between Turkey and the National Accord Government of Libya in November 2019 increased tensions in the Eastern Mediterranean, as it ignored the sovereign rights of Greece’s islands in the area concerned,” the report said. “There was a sharp increase in provocative actions by Turkey towards Greece.”

Finally, it repeated the threat of sanctions. “The European Council also stressed that in case of renewed unilateral actions or provocations in breach of international law, the EU will use all the instruments and the options at its disposal in order to defend its interests and those of its Member States,” the text says.

The eastern Mediterranean standoff clearly illustrates the limits of Erdogan’s power. When confronted seriously by the EU, Erdogan has backed off in the absence of much needed American support.

US Secretary of State Mike Pompeo recently visited Greece and Cyprus, but declined to visit Turkey. This showed Erdogan cannot rely on the Trump administration's support in its perennially problematic relationship with the EU. Besides, if Joe Biden wins the US presidential election next month, Turkey most probably will lose US support altogether.

Yet Erdogan’s failure in the eastern Mediterranean hasn’t stopped him from advancing Turkey’s assertive foreign policy in another region, the South Caucasus. Turkey has been the only international player militarily involved in the clashes between Azerbaijan and Armenia over the contested Nagorno-Karabakh region.

For renowned Russian military affairs expert Konstantin Sivkov, Erdogan’s involvement in the fighting following his eastern Mediterranean failure is incomprehensible. Writing on the Ria Novosti website, he said, “Indeed, it was Erdogan who initiated the war in Nagorno-Karabakh. For too long it was calm in this region, nothing has changed there for the last few years, and here, out of the blue, hostilities begin. For the first time in the history of the conflict, Turkey is simultaneously opposing the United States, France and Russia, while participating in several conflicts in different parts of the world at once; it is pure madness and political suicide." Sivkov was referring to Ankara’s defiance of the cease-fire call by the Minsk Group, an international initiative by France, Russia and the United States to settle the Nagorno-Karabakh conflict.

Under such circumstances, it is not surprising to see that Turkey also decided to test the Russian S-400 missile defense system to the chagrin of the Western world. The decision has already drawn the ire of American senators and triggered a bipartisan effort to impose sanctions on Turkey under the Countering America's Adversaries Through Sanctions Act.

Turkey’s decision to test S-400s as the clashes between Armenia and Azerbaijan continue indicate that Erdogan will be trying to seek Russia’s cooperation.

However, Turkey doesn’t seem to have much sway with the Minsk Group, which has stepped up its mediation efforts between the sides. The group, whose effectiveness has been questioned by Turkish officials, remains the main broker in the conflict.

Erdogan, of course, is not stronger than the EU, the United States and Russia. But as a nationalist autocracy, Erdogan’s Turkey needs aggressive foreign policy adventures to distract public attention from the ever-deepening economic crisis. When the tensions in the eastern Mediterranean subsided, Turkey turned to the Caucasus. If the situation in the Caucasus de-escalates, then one should pay attention to northern Iraq and Syria, where Turkey has relatively more room to maneuver than in the eastern Mediterranean and the Caucasus.