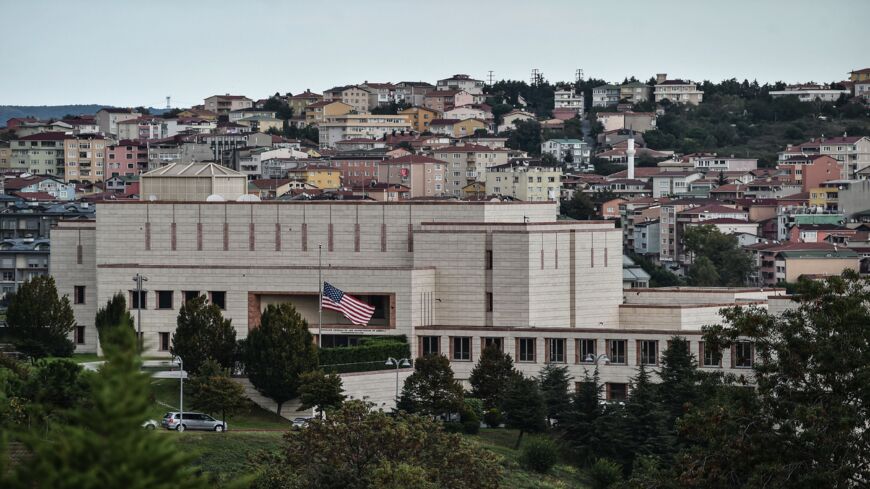 A picture taken Oct. 9, 2017, shows a general view of the US consulate in Istanbul. - OZAN KOSE/AFP via Getty Images

An employee at the US Consulate in Istanbul was sentenced to prison in the Turkish capital on Tuesday for "aiding an armed terror group" that Ankara blames for the failed 2016 coup.

Canturk denied the charges against him in court Tuesday and, according to Reuters, said his role as a security officer at the consulate required he coordinate with local officials.

Canturk was sentenced to five years, two months and 15 days in prison, but a diplomatic source told AFP that he will remain free pending an appeal. Canturk’s daughter and wife were also tried but were acquitted on Tuesday of membership in a terrorist organization.

President Recep Tayyip Erdogan blames Gulen’s followers for the July 2016 coup attempt that left at least 250 people dead and more than 2,000 injured. His government has jailed thousands of alleged Gulen supporters and dismissed or suspended some 150,000 civil workers from their jobs over alleged ties to the group.

The purges and mass arrests of Turkish citizens with alleged links to the coup has drawn condemnation from Washington. In June, a liaison officer for the US Drug Enforcement Administration in Istanbul, Metin Topuz, was sentenced to eight months in prison for “aiding an armed group.” He also denied the charges.

US Secretary of State Mike Pompeo called the accusations against Topuz “baseless” and said the conviction undermined “the critical trust at the foundation of Turkish-American relations.”

Those relations were further strained last week after Erdogan confirmed Turkey had tested its Russian S-400 missile defense system amid strong objections from the Trump administration. The same day, the US Embassy in Turkey announced it had “credible” reports of a terror threat toward Americans in Istanbul and warned US citizens to keep a low profile.