Turkish forces withdrew from their observation post in the city of Morek, raising many questions about the fate of Turkish-backed rebels in the surrounding area. 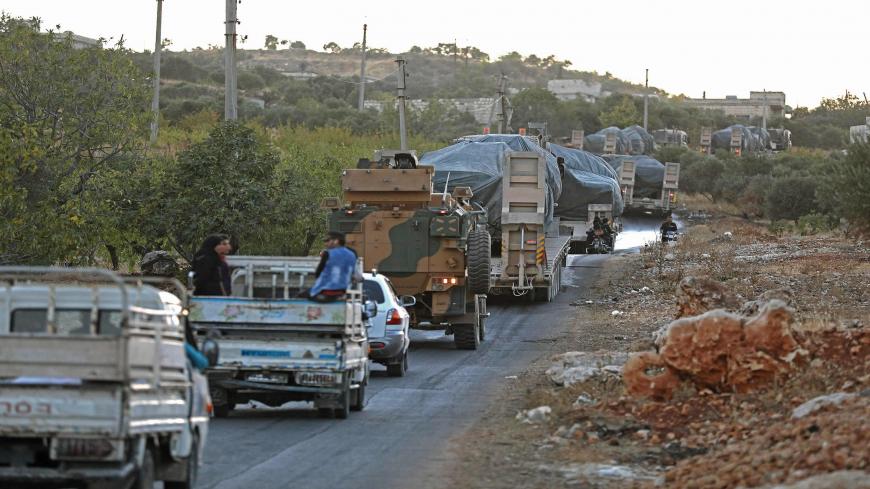 Civilians drive along a road behind a Turkish military convoy through the village of Iblin, near Ariha in the rebel-held northwestern Idlib province, after Turkish forces vacated the Morek post in Hama's countryside, Oct. 20, 2020. - OMAR HAJ KADOUR/AFP via Getty Images

The Syrian Observatory for Human Rights said Oct. 18 that the Turkish forces stationed at their largest military post in Syria’s northern Hama countryside are dismantling their equipment in preparation for their withdrawal from the base.

Turkish forces have been deployed since 2018 at the Morek observation post, in the north of Hama, which is under the control of the Syrian regime forces, according to the observatory.

The Jusoor Center for Studies and Development published Oct. 23 a report about the military and political motives behind Turkey’s withdrawal from some observation points in Idlib. The report talked about the implications of this step and the future of Turkish deployment in northwestern Syria.

“The withdrawal from the Turkish military post stationed in the city of Morek in the north of Hama on Oct. 20 came as a surprise in Syria, especially among the local population who were displaced from their homes in 2019 as a result of the Russian military campaign in the area. These residents were hoping the Turkish side would reach an understanding with Russia to facilitate their safe return, and the Turkish observation points gave them hope that they would return home,” the report said.

“The Turkish military base in Morek is the largest Turkish military post in the entire northern countryside of Hama and is called ‘the ninth point.’ The Turkish army established it near the Damascus-Aleppo international highway [M5 road]. However, it was besieged by the Syrian regime forces after they took control of many cities and towns in the area, most notably Morek and Khan Sheikhoun, in August 2019,” the report added.

According to information from the Turkish side obtained by Al-Monitor, all Turkish posts stationed in the areas under the control of the Syrian regime will be evacuated by early December.

Ela Krawan, a Turkish journalist of Syrian origin currently residing in Sweden, told Al-Monitor, “Turkey had launched talks with the United States on establishing a buffer zone in the east of the Euphrates last year. It seems [Turkey] will now continue these talks with Russia, which will be the beginning of a new dialogue between Turkey and the Syrian regime to pave the way for new economic and political relations between the two sides. [It seems] Russia and the regime will enter the safe zone to create a buffer between Turkey and the People's Protection Units in the areas the United States evacuated in northeast Syria, including Manbij. But Morek is not included in these talks [to create a buffer zone].”

She referred to previous agreements between Turkey and Russia on the Syrian file, whereby Morek, which the regime took control of last year, will not be handed over to the opposition and will remain in the hands of the regime.

Krawan said, “Eventually Russia and Turkey will agree on the division of the areas between the opposition, the regime and the Kurds, which has become imminent. But the final borders in the north have yet to be demarcated, as the two parties [Russia and Turkey] have yet to agree on the fate of Ain al-Arab, Manbij and Tal Rafat, and whether they should remain under Kurdish control or be handed over to the opposition or regime.”

She noted, “The Turkish observation post in Morek [has been] besieged for more than a year, but the Turks managed to use it as a pressure tool against Russia and the Syrian regime. I think that the drone attack carried out by the [US-led] coalition last week [Oct. 22] against leaders of al-Qaeda-affiliated factions [Hurras al-Din] came to support Turkey [in its fight against terrorist groups] in the areas [under its control] specified in the Sochi agreement.”

The drone attack, she believes, will disrupt Russia, which considers that all factions in Idlib are terrorists and uses this as a pretext to achieve its gains.

Krawan added, “The Turks have stressed from day one the unity of the Syrian territories as they stated that they are in the Syrian interior to protect Turkey’s southern borders and secure a safe zone for civilians. Accordingly, the Turkish withdrawal from the area was in order. Such withdrawal, however, was made under certain conditions.” She explained that Turkey withdrew from the Morek observation point on condition that Russia guarantees the security of the Turkish borders in the south by preventing the regime from advancing and posing a threat to Turkey.

Mamoun al-Khatib, a Syrian journalist who lives in the northern countryside of Aleppo, believes the Turkish withdrawal was not surprising. Turkey, he said, maintained its posts in all the areas where the regime advanced in order to prove that it remains strong and show the Syrian people that Turkey will return their lands.

Khatib told Al-Monitor, “However, on the ground the observation posts did not achieve any military gain for Turkey. They were rather a source of concern for the Turks during their military operation against Assad’s forces that recently took place in Idlib [Operation Spring Shield]. This operation ended with a Russian-Turkish [cease-fire] agreement signed by both [Turkish President Recep Tayyib] Erdogan and [Russian President Vladimir] Putin [in March]. The withdrawal of Turkish forces from Morek may indicate that Turkey is preparing to carry out military action against Assad’s forces in the event of any provocations that would change the military control equation.”

He added, “The issue of restoring Khan Sheikhoun, Morek, Manbij, Tal Rifat or any other region [by the Turkish-backed rebels] depends on the Russian-Turkish interests that extend from Libya to Syria and the Karabakh region. The military withdrawal from the Morek base or any other base does not infer the weakening of Turkey in Idlib. This is evidenced by the military reinforcements that Turkey successively sends to Idlib province. These reinforcements include heavy machinery and weapons.”

Faraj Abdul Hamid, a leader in the Free Syrian Army currently residing in Idlib, told Al-Monitor, “Turkey’s withdrawal from the Morek post indicates the weakness of the Turkish position vis-a-vis Russia’s policy in Syria. Turkey also realizes that this post has lost its significance after the surrounding areas fell in the hands of the Syrian regime. But this withdrawal does not mean that Turkey will withdraw from Idlib, as Turkey is sending [reinforcements] to Idlib on a daily basis. In the coming days we may witness Turkish army withdrawals from other points that fall within areas of control of the regime, such as Tal Touqan and al-Sarman, among others.”

He concluded, “Turkey wants to convey a message whereby the regime’s control over these areas is a fait accompli, and Turkey cannot fight a war to restore them, as President Erdogan announced before his agreement with Putin in early March. Turkey cannot protect the posts located within areas under the control of the regime since the latter has tried to attack [Turkey] by pushing residents to protest against Turkish points. These military posts are considered Turkey’s weak flank in the event of clashes with the regime forces or Russia, which will respond by shelling these besieged posts.”