The government affiliated with Hayat Tahrir al-Sham in Syria has decreed that journalists can’t work in their areas of control without a permit. 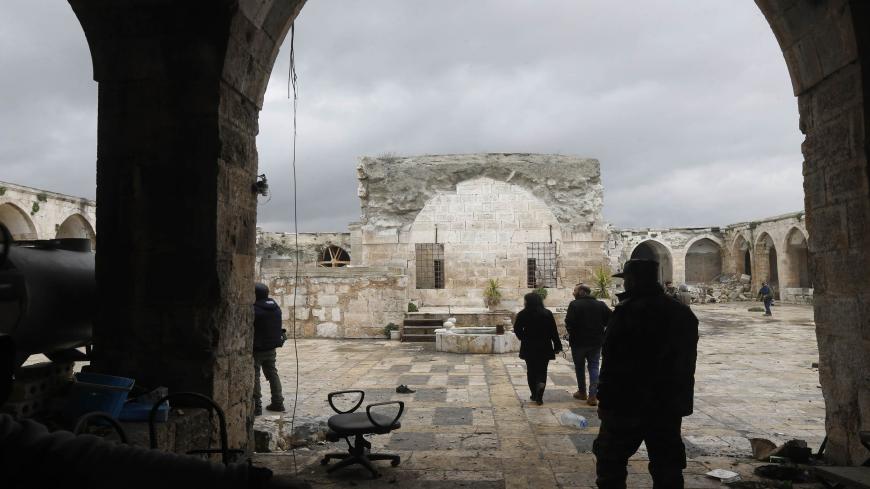 Syrian pro-regime fighters and journalists enter the courtyard of the museum of Maaret al-Numan in the northwestern Idlib province, Syria, Jan. 30, 2020. - LOUAI BESHARA/AFP via Getty Images

In November 2017, the Syrian Salvation Government (SSG) was created as a de facto alternative to the Syrian opposition-led interim government, to start a new phase in the areas outside the control of the Syrian regime in northwestern Syria.

The SSG is known for being under the control of Hayat Tahrir al-Sham (HTS), a radical Islamist group that is designated as a terrorist organization by the United States.

The government began to extend its administrative control over all areas of its influence in the western and southern countrysides of Aleppo and the countryside of Idlib, to the point where it had the media in these areas under its thumb, while marginalizing the opposition-led government that no longer had much control, except for east and north Aleppo and some areas of Raqqa and Hasakah.

In July, the SSG officially began restricting the media in its areas of influence, as it required obtaining a press card issued by its media department for those who want to engage in media work. Those who wish to obtain this card would need to provide the government with all sorts of information.

Media activists and correspondents working in northwestern Syria heavily criticized these procedures, while others supported them.

One reporter and photographer who works for several media outlets told Al-Monitor that he did not apply for this card and continues to work in Idlib’s countryside very cautiously. “I think that if I were to apply for this card, I would be fully recognizing the SSG. This government was not democratically elected; it was appointed by HTS and is considered its civilian wing. Not to mention the subordination I would have to show and the interference in my work as a journalist,” he said on condition of anonymity.

Many working in the media share his fears. Al-Monitor tried to communicate with several journalists who were subjected to abuse, but they refused to speak out of fear.

Such concerns are justified since violations are ongoing. Most recently, the SSG arrested Oct. 5 media activist Anas al-Tarisi in Idlib, a day after Saleh al-Hajj, a reporter and photojournalist, was arrested over a Facebook post in which he criticized HTS.

The Syrian Center for Media and Journalism Freedom, which is affiliated with the Syrian Journalists Association, said in a study published on Facebook Oct. 21 that HTS was the top violator of media freedoms in Syria during the first half of 2020, with 15 violations, followed by Russia, the Syrian regime, the Syrian opposition, the Kurdish Democratic Union Party and the Syrian Democratic Forces.

Journalists who do not carry a card are taking a risk because the card would protect them from being arrested at checkpoints and facilitate their movement. Another journalist told Al-Monitor on condition of anonymity, “I was not convinced of cooperating with or recognizing the SSG, but it became a de facto government responsible for all institutions in Idlib. I had to obtain a card and filled out the application; 16 days later, I received my card and signed labor policies and laws governing media work.”

He added, “The card helped me a lot, especially when I pass through checkpoints. Cardholders can easily pass and take pictures around Idlib markets without being harassed by the police and SSG security services. However, it did not do me any good in government departments. Cardholders cannot take any pictures within government institutions, and this is one of the drawbacks. Holders of a government-issued card should at least be able to take pictures in its departments without having to coordinate a few days before with its officials.”

A female reporter, who has been working in journalism since 2016 and now works for a local Syrian media outlet, told Al-Monitor on condition of anonymity that she obtained a press card and uses it to move around Idlib. “When I travel with my camera, I have to have my card on me since it was issued by the SSG, which controls the area. The card has my full name written on it and the party for which I work,” she said.

Although the SSG granted women press cards, the restrictions imposed on female journalists are ongoing, be it at HTS checkpoints or by the community. She noted that she faces difficulties during her work because she is a woman. “Being a woman working in this field is very tiring, for several reasons. For instance, if a female journalist does not own a car, she would have to travel with her [male] colleagues; and would be subject to harassment for being in the same car with strangers who are not 'mahram' [direct relatives or guardians in Islam].”

Since the SSG is considered the civilian wing of HTS, formerly Jabhat al-Nusra, it implements its policies, and this, of course, applies to its media department, which according to many will not accept any opinion contrary to its own. Although the SSG does allow international and regional media to enter Idlib and northwestern regions of Syria and conduct journalistic work, local journalists must remain under its surveillance.

The second journalist Al-Monitor spoke to noted, “Violations against journalists and media activists have been ongoing since the Syrian regime began arresting them. Before HTS controlled all areas in the countrysides of Idlib and Aleppo, journalists were divided into three categories: The first defended and promoted HTS and its security and civilian wings; the second opposed its actions and focused on documenting its violations; while the third — which is prevalent in most HTS-controlled areas — specialized in humanitarian work and news that is limited to bombing operations or the conditions of the displaced. HTS and the SSG worked hard and dealt the media a hard blow, divided journalists and dispersed their views.”

The vast majority of activists and journalists in areas outside the control of the government in northwestern Syria are opposed to Syrian President Bashar al-Assad and there is no chance for them to work freely in the regime-controlled areas. Yet still, working in their areas they have to face dangerous jihadist groups, headed by HTS.

HTS has spared no effort to threaten anyone who criticizes it with violent punishment, which prompted Reporters Without Borders to condemn in a report in November 2019 the ongoing intimidation of journalists in these areas.

Meanwhile, an audio clip circulated last year of an HTS security officer threatening to kill anyone who criticized his group, especially journalists, saying, “I swear to God we will not leave a single journalist in Syria.” This threat was made following protests that broke out back then against the SSG and its management of the area.