Syria remains one of the world's most dangerous places for journalists, who face repression and violence from the Syrian regime as well as opposition forces. 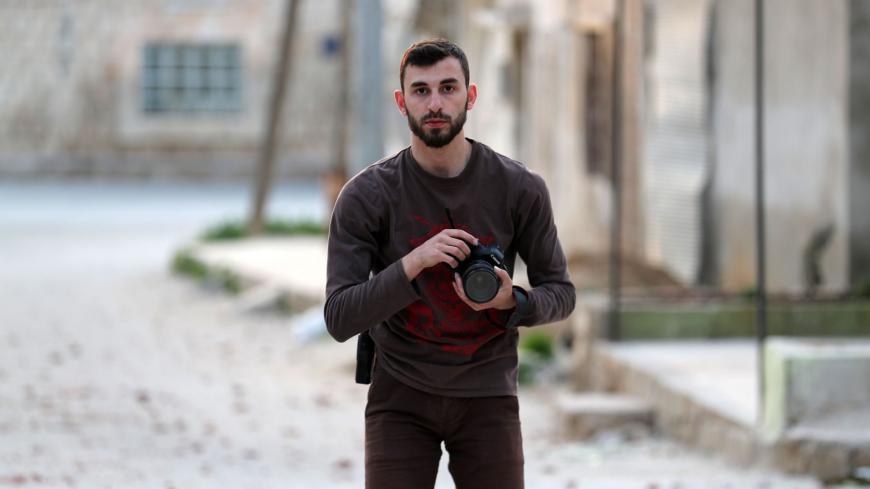 Syrian citizen journalist Anas al-Dyab, who was among 11 civilians killed in an air raid on Syria's Idlib region. Dyab, shown in this image taken Feb. 25, 2019, in the town of Khan Sheikhoun in the southern countryside of the rebel-held Idlib province, was a member of the White Helmets and also contributed to AFP. - OMAR HAJ KADOUR/AFP via Getty Images

Though dozens of opposition factions are present in the area, no one was able to stop or identify the perpetrators. Khattab was shot five times while filming a report on the spread of COVID-19 in northern Syria.

Following Khattab’s assassination, Syrian journalists and activists turned to social media, calling for the protection of journalists, especially in the areas controlled by the Turkish-backed factions. Dozens of Syrian journalists inside Syria joined in, posting the Arabic hashtag #Martyr_Hussein_Khattab.

Days later, Hayat Tahrir al-Sham (HTS), which controls most of the northwestern province of Idlib, arrested journalist Abdul Fattah al-Hussein at a checkpoint on Dec. 22, then released him on Dec. 30. After his release, HTS said that Hussein was arrested because his name had been mentioned in a security case, giving no more detail.

On Jan. 6, journalist Bahaa al-Halabi survived an assassination attempt in the city of al-Bab. Unknown assailants fired 15 shots at him. He was wounded and narrowly escaped death.

In May, the Syrian Network for Human Rights documented the killing of 707 journalists since the Syrian war broke out in 2011, noting that Syria is considered one of the world's most dangerous countries for journalists, with the highest death toll among journalists in 2019.

Reporter Ibrahim al-Khateb, who resides in Idlib, told Al-Monitor, “When a journalist is arrested, the authorities always claim that the arrest has nothing to do with journalism. Journalists face ongoing dangers posed by cells affiliated with the Syrian regime and the Islamic State in opposition-controlled areas. Journalists do not have a safe environment to practice their work, such as obtaining information from reliable sources, and they are unable to carry out investigative work."

He went on, "In general, our work conditions in Idlib are better than the ones in areas controlled by pro-Turkish factions. Despite all the cons, Idlib is better, in terms of security.”

Ismail al-Rej, a journalist living in the Aleppo countryside, told Al-Monitor, “Journalists are subject to a lot of harassment. We cannot even obtain a permit from the controlling authorities to work. We suffer arbitrary detention and assassinations. Although there are areas that are better than others when it comes to security for journalists, all media professionals live in fear because we have not learned the identity of those who have assassinated some of us. There is no security in opposition-held areas and there are several parties that have an interest in assassinating media professionals.”

He explained, “We often succeed in pressuring these factions and manage to protect the arrested journalists, and the factions often come out with statements justifying the arrests. There are no real differences between HTS and the Free Syrian Army factions, but attacks by unknown individuals are less in Idlib compared to other areas.”

Yassin added, “The future of journalistic work in the opposition-held areas is not bright. Journalists have started to emigrate. Many of them have submitted [asylum] applications to European countries and others are planning to follow suit. The environment in opposition-controlled areas is not safe for journalists and their families. If the officials continue to ignore this matter and fail to put in place laws and plans to protect them, we will unfortunately be left with no media professionals reporting the suffering of Syrians.”

Taqi al-Din Omar, an official in HTS’ media relations office, told Al-Monitor, “Freedom of the press in the Idlib area is a guaranteed right for all journalists, outlets and activists. This can be seen in the number of media organizations present in the area and the thoroughness of their work. We welcome all media outlets and professionals who wish to convey the suffering of our people and document the war crimes caused by Russia and the Syrian regime. Idlib is the best area in all of Syria in terms of freedom of the press. One of the most important principles of the revolution is the freedom of expression.”

Speaking about HTS' arrests of journalists, he said, “Security is essential to ensure justice and the continuation of life. Sometimes personal allegations are raised or certain names are mentioned in criminal cases and others, and the procedures of these cases are carried out like other cases known to the general public without discrimination. A journalist may be referred to the judiciary, but no one has ever tried to silence anyone for criticizing anything; this is what distinguishes the Idlib area from others.”

He added, “Over 500 international press delegations entered the Idlib area in 2020, completed their journalistic mission and returned to their countries.”

Omar noted that the HTS-backed Syrian Salvation Government's media directorate in Idlib issues press permits to facilitate the work of journalists, pointing out that a media charter and law guarantee press freedom.

But an activist living in an area controlled by the Turkish-backed factions told Al-Monitor on condition of anonymity, “All factions are tightening their grip around journalists and there is no freedom and security for them. Their lives are threatened and they live in constant fear, especially in the areas of the pro-Turkish factions since Turkey does not intervene to protect media professionals.”

He added, “In terms of security, HTS-controlled Idlib is better, but it carries out random arrests without trials, and this is also a violation. Despite living in more comfortable conditions, journalists are still under the control of HTS.”