The families of detainees in Hayat Tahrir al-Sham’s prisons in Syria’s Idlib province organized a series of protests, demanding that the group free their relatives, amid rumors that some of them will be executed. 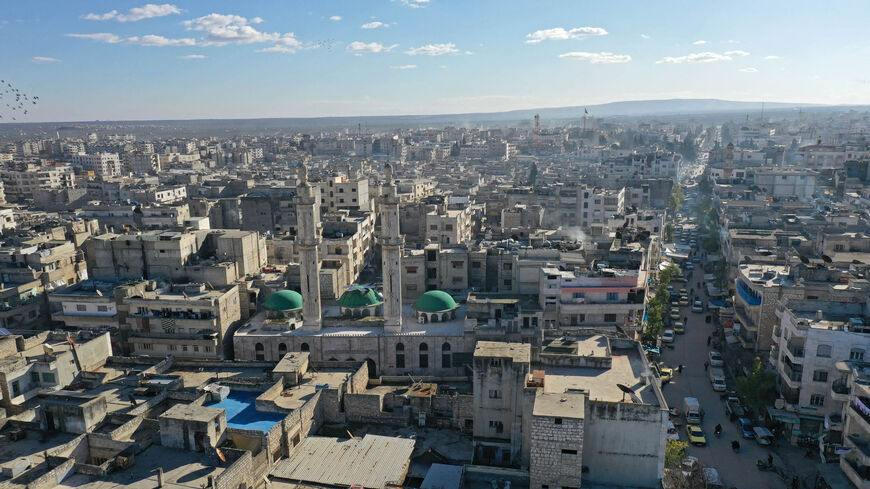 ALEPPO, Syria — The number of protests demanding the release of detainees from the prisons of Hayat Tahrir al-Sham (HTS), which controls Syria’s northwestern province of Idlib, have increased in the past days, following rumors circulating in the jihadis' and moderate Islamists' circles in Idlib that HTS plans to execute a number of prisoners.

On Jan. 21, dozens of people took part in a mass demonstration in the HTS-held town of al-Sahhara, in the northwestern Aleppo countryside, chanting slogans condemning HTS’ abuse against detainees held in its prisons.

The protesters carried photos of the prisoners and raised banners reading, “You killed the rebels, arrested the honorable, insulted the nobles and beat free women. What else does HTS’ security apparatus leave to the tyrants?” Another banner read, “Freedom to the revolution’s detainees."

On Jan. 20, a group of women from al-Sahhara issued a statement in a video recording that circulated on Twitter, calling for the release of the detainees.

Another demonstration against HTS was held in al-Sahhara on the evening of Jan. 19.

The town of Deir Hassan, north of Idlib, witnessed a similar demonstration with the same demands. Social media accounts opposing HTS said that the latter arrested Jan. 21 activist and journalist Abu Bakr Has for taking part in the protests in Deir Hassan.

On Jan. 21, dozens of women and children took to the streets of Tal Adeh town, north of Idlib, demanding that HTS frees their detainees. The children chanted, “We want the detainees.”

One of the protesters urged HTS to free their husbands and brothers. The woman who spoke in the video appealed to the clans, notably al-Naim clan, to mediate with HTS. She said, “We can no longer continue to live while our husbands are in prison. We do not know if they are alive or dead,” in reference to the possibility that HTS could have executed them, according to rumors in mid-January.

The anti-HTS protests demanding the prisoners’ release are still ongoing. Women continued to demonstrate, organize sit-ins and issued one statement after another to stress their demands.

But these protests and demands have been falling on deaf ears, as HTS continues to tighten security restrictions and arrest opponents on various charges, such as membership of extremist groups that HTS is cracking down on, including al-Qaeda-affiliated Hurras al-Din and the Islamic State, as well as other charges that HTS does not reveal to the families of detainees.

Speaking to Al-Monitor on condition of anonymity, a woman in charge of organizing the anti-HTS protests in Idlib said the families of detainees in HTS prisons have serious fears that their sons will get killed, because the prison administration prevents any visits and refuses to give any information about their health.

She said that these fears escalated early this year with the news coming from within the HTS prisons that the decision had been taken to execute a number of detainees, and that others went on hunger strike in protest against torture inside the prisons.

She added, “We — the protesters who are demanding to learn about the fate of our relatives — do not really know what the charges against our detained husbands and sons in HTS prisons are. The detainees are known for their opposition to HTS, for criticizing its policies and for demonstrating against it over the group’s control of people’s lives, its imposition of taxes and suspending the fight against the Russian enemy and the Syrian regime forces. Most of the arrests took place in 2020 and 2021.”

Ahmed Zakaria al-Dolei, a journalist and activist, is among the detainees. He was arrested by HTS in late November for covering news about the price hikes and living crisis in Idlib.

Speaking to Al-Monitor on condition of anonymity, an organizer of the protests in Deir Hassan, whose relative is detained in an HTS prison, said, “HTS continues [its crackdown] against those who criticize its repressive policies in Idlib. HTS is acting without an emergency law that allows them to arrest people in a revolution that sacrificed more than 1 million martyrs for the sake of getting rid of injustice and tyranny.”

He said, “HTS’ ongoing violations against the revolutionaries confirm that it seeks to impose its iron fist. This restriction and this cruelty will not deter the free people from speaking the truth in the presence of the oppressor and tyranny.”

He noted, “Abdul Rahim al-Hassan, a notable from the town of Killi in Idlib countryside, is one of those detained by the group. HTS arrested him months ago while at home because of his participation in protests warning against the fall of the M4 highway in the Syrian regime forces’ hands, and denouncing the Russian patrols on the key road.”

An official at the HTS security apparatus who declined to be named told Al-Monitor, “The protesters’ allegations regarding the detainees are mostly incorrect. Many of them were arrested for criminal offenses, and others were arrested on suspicion of belonging to jihadist organizations trying to stir up chaos in Idlib.”

Commenting on the rumors that there is a decision to execute a number of detainees, the HTS source said, “We categorically deny the rumors about executions, and we will work during the coming period to open communication channels with the detainees’ families in order for them to closely follow up on the cases and their detainees’ conditions in prisons.”