Can Russia benefit from Turkey-Greece spat?

In light of the conflict in the eastern Mediterranean between Turkey and Greece, Russia may be looking to strengthen its ties with Greece in order to further its interests in the region. 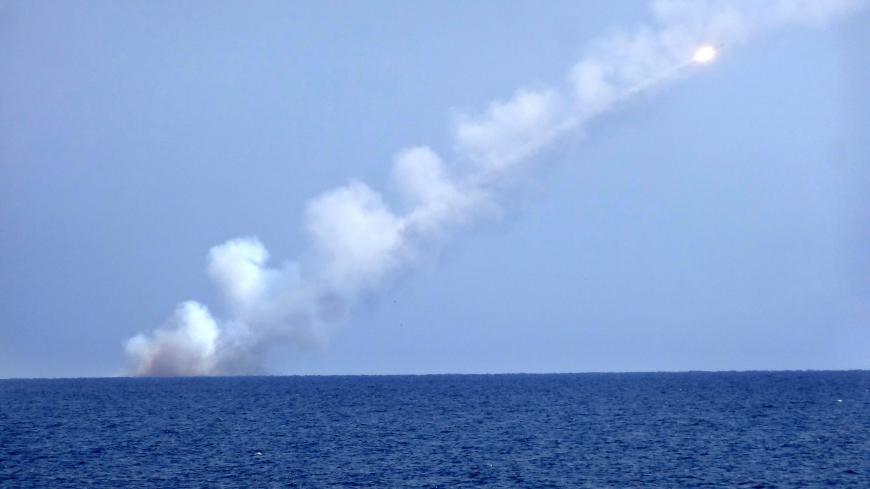 A Russian cruise missile is launched from a submarine at an undisclosed location in the Mediterranean Sea, Sept. 14, 2017. - MARIA ANTONOVA./AFP via Getty Images

Russian arms exports it seems are fast becoming a tool in the intimidation tactics employed by both sides of the Turkey-Greece spat. This, at least, is the conclusion one can draw from reading Greek media reports over the last few weeks. The two Mediterranean foes, which had both been accused of breaking with NATO solidarity by purchasing Russian arms, are resorting to war threats in a dispute over the eastern Mediterranean territories. Meanwhile, the Greeks enjoy the backing of not just Cyprus — through which the Russian S-300 were at one point suppled to Greece — but also by France, Egypt and the United Arab Emirates. Russia must feel flattered it can have at least an indirect influence on the Turkey-Greece confrontation. That said, it is unlikely that Moscow will end up providing its resolute support to either one camp or putting much efforts into resolving the dispute. Indeed, the current tensions play in the Kremlin’s hands.

In mid-September, reports began to appear in Greek media suggesting the government is holding negotiations with Moscow regarding the upgrade of the Russian-made S-300PMU-1 into the S-300PMU-2 Favorit version. These days, the Greek press also writes that Athens may be ready to hold its first exercises in 15 years with the S-300s on the island of Crete. Even though the officials have not yet confirmed those rumors, the fact that those reports came out just as the dispute with Turkey was getting hotter implies that the leak might have come from the officials seeking to send a signal to Ankara. Ostensibly, the reason for holding exercises is the threat of expansion of Turkey’s oil and gas prospection in the eastern Mediterranean. This expansion is part of the Mavi Vatan (Blue Motherland) doctrine claiming Turkeys’ sovereignty in the Aegean, Mediterranean and Black seas, even though a key architect of the doctrine — Rear Adm. Cihat Yayci — had recently lost his position. Turkish President Recep Tayyip Erdogan recently provided an update on the estimated reserves in a gas field off its Black Sea coast, claiming it reached 405 billion cubic meters. Yet Ankara also claimed that the Mediterranean Sea, too, may contain larger reserves than believed. In reality, however, Greek exercises may well be a response to Turkey’s recent exercises with the S-400.

Seen in this context, reports on negotiations between the Greeks and the Russians do not seem far-fetched, especially provided Greek officials had previously engaged in such talks. In 2015, Greek Defense Minister Panos Kammenos announced Greece was holding talks with Russia concerning purchasing new missiles for the S-300 and servicing the existing air defense systems deployed to the Mediterranean country, all this despite the simmering Ukraine crisis and freshly imposed Western sanctions on Moscow. At the time, Greece was the only country deploying the Patriot PAC-2 interceptors together with the S-300PMUs, all integrated into one system. The Greeks also had two Soviet-produced short-range missile defense systems, Osa-AKM and Tor-M1. One should recall that the two S-300 battalions in Greece were not purchased directly from Russia but were instead shipped from Cyprus, which bought it off Moscow but was blocked from deploying the systems by the United States, the United Kingdom and Turkey. In 2006-7, the systems were transferred to Greece, yet it took almost a decade before the Greeks first carried out exercises with the S-300s in the Akrotiri fields in 2013 during the Lefkos Aetos 2013 (White Eagle 2013) military exercise.

Alexander Gorkov, former head of the anti-aircraft missile forces of the Russian air force, told this author once that in private conversations the Greeks did not hide the fact that their negotiating manoeuvres, aside from security military advantages, had a political aim of sending a signal to Turkey. Yet in 2014, Athens, with which Moscow had active contacts at the time — some Greek parties even received funding from  Russia for promoting rhetoric beneficial to its interests — decided against showcasing the S-300 systems during the military parade because of the “intensification of the Ukrainian conflict.” The systems were taken out of the program so late in the day that the brochures handed out to the parade’s guests still included the S-300 demonstration as one of the agenda’s items.

That said, neither those awkward moments nor sanctions prevented Greece from concluding a deal with Russia on the shipment of spare parts for the Tor-M1 and Osa-AKM missile defense systems. The deal served to preserve the country’s defense capabilities, the Greek side subsequently emphasized. However, the plans to purchase the S-300 missiles, it appears, has remained on paper. And that is despite a real military necessity for such a deal, provided the shelf life of missiles in Greek service was expiring and the Russians could offer new missiles that had a longer range.

Now, it is not inconceivable that reports on Greece’s intention to upgrade the S-300PMU-1 battalions is all just fake news operation, even though from a technical point of view an upgrade of the Greek S-300 to the version that is currently in service in Sira and Iran is feasible. Indeed, the S-300PMU-2 Favorit system is built on the S-300PMU-1 system and offers a few upgrades. One difference between the two iterations is that, for one, S-300PMU-2 can deploy the 48N6E2 missiles with an ability to hit ballistic targets at a range of 40 kilometers (25 miles) — 200 kilometers (124 miles) in the receding aerodynamic target scenario — with greater precision. Besides, the upgraded S-300 is equipped with an enhanced system of detecting and tracking of targets, as well as with the 96L6E radar offering better performance in unmanned combat.

In theory, Moscow may be interested in striking a deal with Greece, especially provided that the contract on the S-300 update would not be a new deal but rather an add-on to the existing one. This would allow Russia to somewhat raise the stakes in its game with Turkey in the Middle Eastern theater, as well as in the context of the ongoing Nagorno-Karabakh conflict. Despite its moderate tone in public, Moscow is apparently dissatisfied with Ankara’s activity in the South Caucuses, as is clear from the leaks that contain criticism of Turkey published by the Russian media, even if Turkey’s role is hardly the key source of the conflagration in Nagorno-Karabakh. Besides, Cyprus President Nicos Anastasiades formally asked Russian leader Vladimir Putin to intervene in the Mediterranean dispute and dissuade Turkey from gas exploration in Cyprus’ exclusive economic zone. This intervention came as Russian Ambassador to Cyprus Stanislav Osadchiy held talks with the island’s Defense Minister Charalampos Petrides on questions regarding bilateral relations. Overall, then, Moscow finds itself in a nuanced position. Complicating matters further is the fact that Cyprus, Greece and Israel are promoting the project of the EastMed pipeline, a direct competitor to the Russia-backed Turkish Stream.

Russian experts strike a cautious tone when reflecting on a prospect of change in the course of Moscow-Athens relations. Russian journalist Igor Subbotin told Al-Monitor that, although Russia does not have a definitive strategy toward Greece, it would hardly miss an opportunity to enhance its influence against the backdrop of rising contradictions between various players in the Mediterranean on the one hand and the United States on the other. Yet Washington watches this space and has tied the lifting of the arms embargo from Cyprus to the island denying Russian military vessels access to its ports. Cyprus’ refusal to approve sanctions against Belarus — unless the European Union toughens its stance in relation to Turkey — came as the latest evidence that the Kremlin has a room for exploiting squabbles within the West to assert its influence. “Cyprus digging its heels in the discussions with the Europeans came almost at the same time as Russian Foreign Minister Sergey Lavrov visited the island Sept. 8. Thus, while Russia backs the Turkish Stream project over the EastMed pipeline, the Kremlin can still pressure Turkey for a better deal on gas prices, negating Ankara’s arguments pertaining to its future self-sufficiency,” Subbotin noted.

Timur Akhmetov, Ankara-based expert of the Russian International Affairs Council, told Al-Monitor that Russia’s position on the Cyprus problem does not raise concern in Turkey since Moscow, too, supports resuming the dialogue between different communities on the island, even if Nicosia has not shown the appetite for the talks. On the other hand, tensions in the western Mediterranean can further Russian interests. First of all, those tensions raise commercial risks associated with gas projects that are in competition with the Russian-backed pipeline projects. Second, tensions impose cost on the United States and NATO, which distracts them from conducting a more muscular policy against Russia in the Black Sea region and Syria.