Pompeo hopes Armenia can 'defend' itself from Azerbaijan

Secretary of State Mike Pompeo also said that Turkey was increasing the risk of more bloodshed. 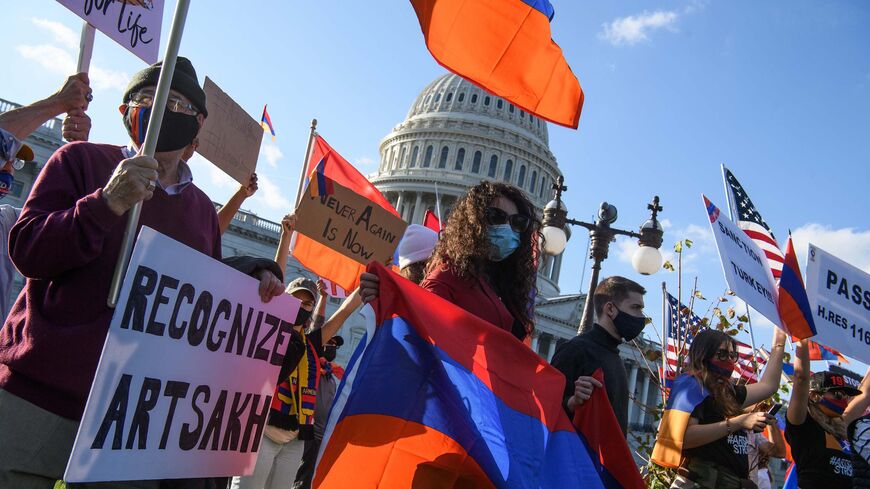 Armenian-Americans hold signs and flags as they protest over the conflict between Azerbaijan and the Armenian enclave of Nagorno-Karabakh and Turkey's support for Azerbaijan in front of the US Capitol in Washington, DC, on Oct. 15, 2020. - NICHOLAS KAMM/AFP via Getty Images

US Secretary of State Mike Pompeo said Thursday that he hoped Armenia could "defend" itself against Azerbaijan in the conflict over Nagorno-Karabakh, adding that Turkey’s role had increased the risk of further violence.

The fighting between the two former Soviet republics over the contested territory of Nagorno-Karabakh, which is internationally recognized as part of Azerbaijan but run by ethnic Armenians, has left more than 500 dead since late September.

The United States has sought to remain neutral in the intensifying conflict, but Pompeo seemed to endorse Armenia during an interview with Atlanta TV station WSB.

“We’re hopeful that the Armenians will be able to defend against what the Azerbaijanis are doing,” Pompeo said, adding that he hopes both sides can reach a cease-fire.

NATO ally Turkey enjoys close ties with the Muslim-majority Azerbaijan, with whom it shares ethnic ties. Ankara has reportedly sent hundreds of Syrian recruits to the breakaway enclave to fight alongside Azeri troops. It denies the reports.

“We now have the Turks, who have stepped in and provided resources to Azerbaijan, increasing the risk, increasing the firepower that’s taking place in this historic fight,” Pompeo said.

The Turkish government has also dismissed calls for an immediate cease-fire from the Minsk Group, which is co-chaired by Russia, France and the United States. Turkey has instead urged the Armenians to withdraw from Nagorno-Karabakh.

A Russian-brokered humanitarian cease-fire was supposed to take effect over the weekend, but within hours, the two former Soviet republics had accused each other of launching new attacks. Baku has accused Armenian forces of attempting to seize its gas and oil pipelines, a charge Yerevan denies.

Democratic presidential nominee Joe Biden has called on Azerbaijan to de-escalate, and this week, also took aim at Turkey’s participation in the conflict.

“Turkey’s provision of arms to Azerbaijan and bellicose rhetoric encouraging a military solution are irresponsible,” Biden said in a statement.