Palestinian President Mahmoud Abbas’ proposal to hold an international conference on peace in the Middle East has gained the support of several member states of the United Nations Security Council. 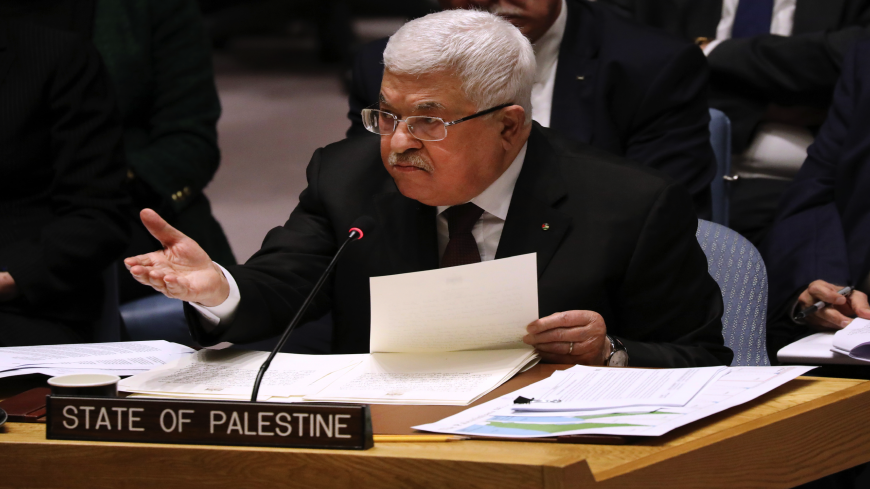 The idea presented by Palestinian President Mahmoud Abbas to hold an international peace conference in early 2021 appears to be gaining traction in major international capitals.

In an exclusive interview with Al-Monitor, the Permanent Observer of Palestine to the United Nations, Riyad Mansour, sounded upbeat about the interest of the world community in participating in the suggested conference due to take place after the inauguration of a new US president in 2021.

“Holding such a conference takes time to prepare, and we were blessed that the Russian representative to the UN Security Council was open to the idea of a general discussion of the topic Monday (Oct. 26),” Mansour said.

The Security Council discussions revealed near-unanimous support for the initiative presented by Abbas at the UN General Assembly on Sept. 25.

“We are doing all the hard work starting from now so that the modalities of the conference can begin early next year,” the Palestinian diplomat added.

Giving importance to the discussion, Russia’s Foreign Minister Sergey Lavrov sent a letter that was read at the Security Council session stressing the Russian position on peace in the Middle East.

Moscow, which had previously welcomed the idea, is hoping to host the suggested conference even though a number of European capitals have also shown interest in having the conference in their countries.

“Russia is playing an important role both in the Security Council, which they head this month, and within the Quartet,” Mansour said. The quartet is made up of the United Nations, European Union, United States and Russia.

Comments at the Security Council session showed that France, Germany, Belgium, China and others all spoke in support of the conference. Even the United States and Israel, who are opposed to the idea, were forced to engage with the concept and take it seriously in their deliberation.

US Ambassador to the UN Kelly Craft said Washington had "no objections" to a conference, but questioned whether it could achieve results.

Mansour argues that what is emerging now are two visions of how to move forward for peace in the Middle East region. “There is the inclusive vision where everyone participates, international law is the basis of discussions and there is general agreement on the two-state solution. On the other hand, there is an exclusive vision focused on [US President Donald] Trump’s unilateral idea, which has been rejected by Palestinians and most of the world,” Mansour added.

One of the keys to the possible success of this Palestinian effort is UN Secretary-General Antonio Guterres. Mansour says Guterres needs to be the driver behind this effort.

“He will not do anything until the US elections results are known, but it is clear that he will play a big role once this picture is clear. Expect to see a much more active role by the secretary-general if [Democratic candidate Joe] Biden wins the American election,” the veteran UN official said.

According to the rotation process, the expected chair of the Security Council next January will be the Gulf Arab country of Kuwait. Mansour says that Kuwait and Palestine are already cooperating to ensure the conference gets a big push from the Security Council.

Kuwait has been a strong supporter of Palestine and has resisted US pressure to normalize relations with Israel, and Mansour says the normalization issue has done little to change the current international effort in support of peace.

“Almost all countries of the world, including the recent normalizers and the potential normalizers, are all in strong support of President Abbas’ call for an international conference for peace,” Mansour added.

The New York-based Palestinian official says work on the ground in Palestine is just as important as that at UN headquarters. The unification efforts that were highlighted in the Sept. 3 meeting of Palestinian factions in Ramallah and Beirut as well as the expected elections will help the international efforts, Mansour said.

While it is true that the discussions at the Security Council on Oct. 26 appear to be supportive of Abbas’ idea of an international conference, many other elements are still missing in this debate.

For a conference to be held and to produce results, much more behind the scenes work is needed, especially with the involvement of Washington and Tel Aviv. The conference idea could be the last effort by the 85-year-old Palestinian leader to prove diplomacy and international law works.

Success on the internal front and the holding of elections will certainly give this effort an important push forward. While the Palestinian people living under occupation and in the diaspora are not going anywhere, the big question remains whether the international community means what it says and is willing to put some serious effort including pressure on Israel to make it work.