Low chances of success for Abbas’ alternative to US peace plan

Palestinian President Mahmoud Abbas proposed his vision for a peace process with Israel as an alternative to the United States' deal of the century. 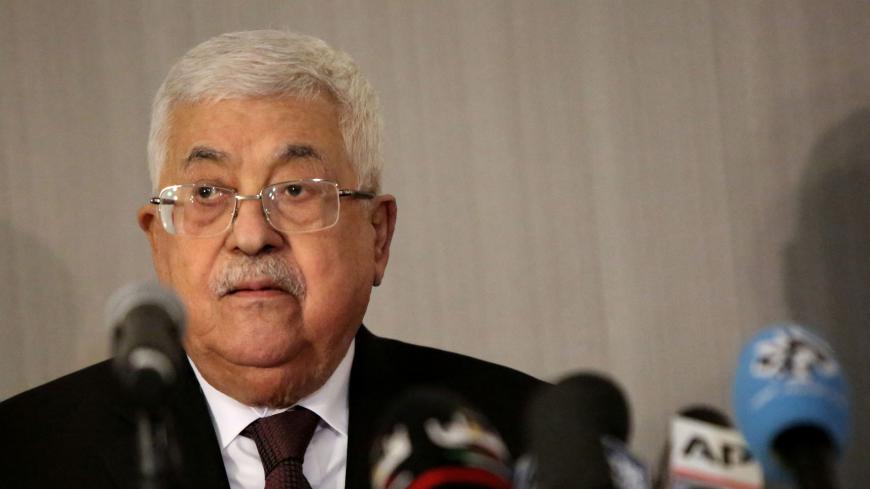 RAMALLAH, West Bank — Thousands of Palestinians in the West Bank city of Ramallah gathered during a central event organized by Palestinian factions Feb. 11 to condemn the US deal of the century and voice their support for President Mahmoud Abbas’ refusal of the deal.

The rally coincided with Abbas’ speech before the UN Security Council Feb. 11, during which he clarified the Palestinian stance against the deal of the century and outlined the alternative Palestinian vision.

In a nutshell, the Palestinian vision for the peace process comprises holding an international peace conference under the auspices of the Middle East Quartet, which includes the United States, Russia, the European Union and the United Nations, and the permanent member states of the Security Council, in the presence of Palestine and Israel.

The conference, which Abbas called for, aims at implementing the Security Council resolutions, specifically 2016's Resolution 2334, and the two-state solution and Arab Peace Initiative by establishing an international mechanism sponsoring the negotiations between the two sides and refusing any unilateral US sponsorship for the negotiation process.

The Security Council issued in December 2016 a resolution — which 14 member states supported and the United States abstained from voting on — reiterating calls for Israel to halt all settlement activities on the occupied Palestinian territories, including East Jerusalem.

In his speech, Abbas expressed readiness to start negotiations with Israel at any time, provided they are under the auspices of the Middle East Quartet. He submitted to the Security Council a document that the PLO had prepared about 311 violations of international law included in the deal of the century.

In his vision, Abbas underlined two pillars to gain international consent and support. He asserted he would continue to address Israelis and extend his hand for peace in an attempt to win over the Israeli public opinion, and he reiterated his commitment to nonviolence no matter how intense the attacks on him are.

Palestinians are set to submit a draft resolution against the deal of the century to the Security Council after deliberations among the state parties end. The date to submit the draft resolution has not been determined yet, and news and reports have been circulating about withdrawing it. Member of the PLO’s Executive Committee Saeb Erekat denied these allegations Feb. 10 and asserted that the draft resolution “condemns Trump’s plan.”

Omar Awadallah, head of public administration for UN human rights organizations at the Palestinian Ministry of Foreign Affairs, told Al-Monitor, “The speech of the president at the UN Security Council carries important indications that the party responsible for maintaining international peace and security has to assume its responsibilities facing the dire violation of Palestinian people’s rights.”

Awadallah indicated that Abbas asserted the solution to the Palestinian cause must happen at an international level, based on the Security Council resolutions. Palestinians are insisting on peace through the initiative that Abbas proposed by calling for an international peace conference and the formation of a multilateral international movement to reach peace mechanisms mediated by the Middle East Quartet.

Abbas’ initiative is similar to the one he proposed to the Security Council back in February 2018 when he called for an international peace conference mid-2018, which was preceded by international recognition of the Palestinian state.

Awadallah noted, “Abbas’ proposal restates what he had suggested in 2018, which shows Palestinian readiness to engage in the political process according to a specific and clear timeline.”

The Oslo Accords ratified between Israel and the PLO in September 1993 had dismissed main issues dubbed the final solution issues, like Jerusalem, the borders, the state, refugees and settlements, until the end of the transitional phase of the accord set at five years. With the end of this phase and the failure of the Camp David negotiations in 2000, the second intifada broke out.

Secretary of Fatah’s Revolutionary Council Majid al-Futaini told Al-Monitor that Abbas’ vision is in line with that of UN Secretary-General Antonio Guterres, who noted that the Palestinian cause should be resolved based on the two-state solution and with the European Union. Belgium’s Minister of Defense and Foreign Affairs Philippe Goffin read out a statement of the EU member states at the Security Council, which stated that the US deal of the century has strayed far from all internationally agreed-upon standards.

Futaini stated that Palestinians would wait for the outcome of the Security Council’s vote on the Palestinian draft resolution. He noted that if the United States uses its veto right, the draft resolution will be submitted to the UN General Assembly.

Wassel Abou Youssef, member of the PLO’s Executive Committee, told Al-Monitor that the PLO, which is seeking to hold an international peace conference, mainly wants to break the US monopolization of the peace process. He indicated Palestinians’ openness to all forms of sponsorship, provided they are multilateral and international.

Although Palestinians have called for an international peace conference on several occasions, they realize how difficult it is to achieve.

Professor of media and political sciences at Al-Quds University Ahmed Rafik Awad told Al-Monitor, “The Palestinian Authority cannot hold an international conference because such a step would need a powerful state capable of bringing in participating countries.”

He added that the PA has repeatedly proposed this initiative because “it wants international and regional countries to adopt, protect and support this idea. Many countries might adopt and support it, like the EU or Russia. But its success requires US approval and Israel’s presence.”

Awad said the US administration’s approval of holding the international conference cannot happen unless the balance of power in the world shifts or the current US administration changes. He added that Palestinians could foil the deal of the century by deterring it through pressuring Israel, which must be aware the implementation of this plan would jeopardize its security and future and would not bring it peace and normalization.