The Palestinian Authority is trying to urge Russia to play a more effective role in the peace process through its position in the international Quartet and to call for an international peace conference. But there are still no serious indications of Russia’s responsiveness. 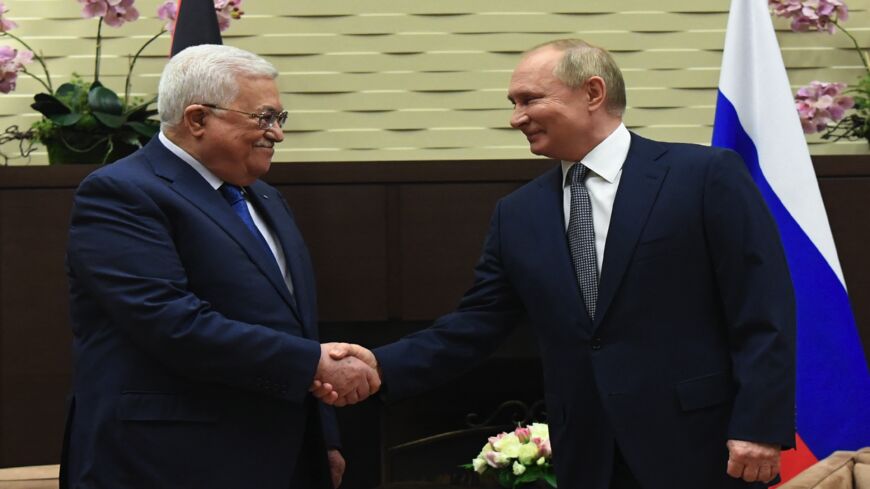 RAMALLAH — Once again, Palestinian President Mahmoud Abbas is knocking on the Kremlin’s door to urge his Russian counterpart, Vladimir Putin, to intervene to revive the dead peace process through a meeting in Sochi Nov. 23.

Ahead of his trip to Moscow Nov. 22, Abbas told the Russian agency Sputnik News that he would discuss reviving the political process with Putin and he trusts the Russian support in this framework, in light of Russia’s faith in the two-state solution that enjoys international legitimacy.

He noted, “I will fill Russia in on the latest developments of the Israeli-Palestinian relations and on how to find a political solution based on decisions of international legitimacy and ways to promote bilateral relations, not to mention several regional and international issues of common interest.”

The Palestinian Authority (PA) is undergoing a dilemma at all levels. On the one hand, it is facing a stifling financial crisis with no way out on the horizon in light of Israel’s continued deduction of clearing funds and the decline in Arab and international financial support. Its popularity has also dropped, according to the latest polls, due to its practices, including canceling the general elections, killing opposition leader Nizar Banat, suppressing freedoms and opposition figures, and being unable to control the field situation, given the increasing incidents and security chaos.

Abbas Zaki, a member of the Fatah Central Committee, told Al-Monitor, “Russia is our friend, and it is a great country that has a military and political role in the region. It also attributes importance to the Middle East. Therefore, this friendship requires Russia to take action and play a political role, because we are at a crossroads as we face Israeli aggression against us, US impotence and reluctance from the Western camp (European countries) in implementing its decisions.”

Zaki added, “These indicators will be raised openly with our Russian friends, especially as the Palestinian leadership is preparing a new strategy to deal with Israel. We have given our all to the peace process, but to no avail. We want to reshift focus to the Palestinian cause,” referring to the decisions the PA will take after Abbas' deadline ends.

In response to whether approaching Russia was a prelude to knocking on the international community’s doors before the end of Abbas’ deadline, Zaki said, “Israel met the president's deadline with settlement construction, killing and destruction. Therefore, the past ways are not reliable. Israel has exploited peace to continue killing Palestinians and stealing their land, and the world must stop adopting double standards in the most complex conflict that exists.”

It seems that the PA is on the verge of its most critical and important test yet, and it is seeking as of now a way out after it committed itself to that during Abbas' speech at the United Nations on Sept. 24.

The PA wants to make final decisions in the relationship with Israel within a year if Israel does not withdraw from the territories it occupied in 1967, where more settlement projects are being built. The PA is trying to put pressure on the relevant international parties through a political movement led by several Palestinian parties.

A member of Fatah’s Revolutionary Council, Abdullah Abdullah, told Al-Monitor, “President Abbas’ visit to Moscow is part of the political action that the PA has undertaken since President Abbas’ speech at the UN. A large delegation has been sent to a number of African countries recently. Prime Minister Mohammad Shtayyeh and Foreign Minister Riyad al-Maliki toured several European countries, in addition to receiving many officials and international delegations in Ramallah,” to put the international community before the deadlines of the political process.

On Sept. 24, President Abbas delivered a speech at the UN in which he gave Israel a full year to withdraw from the occupied territories, and if it refuses, bold decisions would be taken such as resorting to the International Court of Justice as the supreme body in the international judiciary, to take a decision on the legitimacy of Israel’s occupation of the Palestinian territories, the withdrawal of the PLO’s recognition of Israel or the PLO’s abandonment of the two-state solution, and a return to demand the implementation of the partition resolution issued by the UN Security Council.

Member of the Executive Committee of the PLO Ahmed Majdalani told Al-Monitor that President Abbas' visit to Moscow comes at an important time to benefit from Russia's regional and international role in international politics. He noted that Abbas will propose during his meeting with Putin the possibility of calling for an international peace conference and opening horizons to the peace process through Russia’s role in the international Quartet committee.

Palestinians are banking on Russia to play an effective role in the political process because, according to Majdalani, “We have strong relations and friendship with Russia, and there are common points of understanding between us related to the vision of the two-state solution. Therefore, we believe that Russia will play a more effective role by virtue of its strength and influence in international relations.”

Majdalani indicated that what is required of Russia is to play a more effective and influential role through the international Quartet committee so that the committee will be the driving force and caller for the International Peace Conference as a nascent framework instead of the biased US sponsorship.

Since the beginning of the peace process, Russia has not exercised any pressure or shown great interest, and it is trying to remain impartial between Israel and the PA by adhering to the resolutions of international legitimacy and the vision of the two-state solution through negotiations, all the while preserving its interests with Israel, without exercising any pressure or taking final decisions to move the political settlement process forward.