With an enormous number of poor Israeli students lacking computers and a state that seems unable to supply them, distance learning has no chance of success. 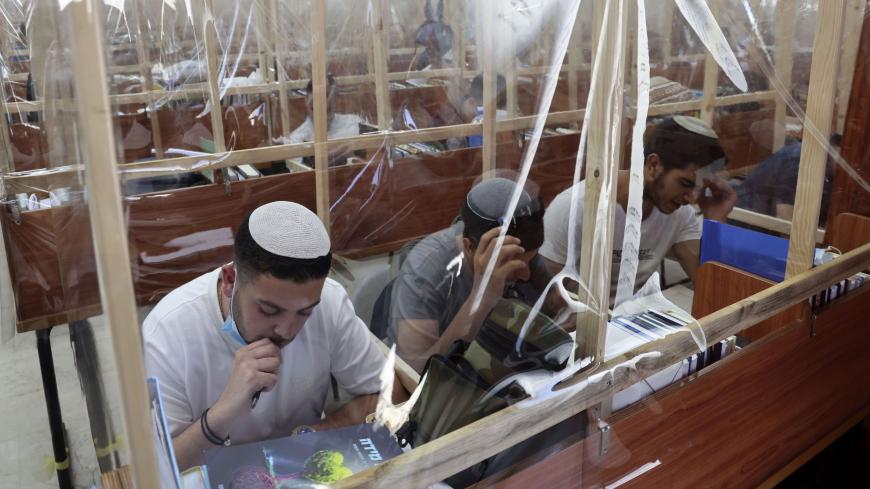 Ultra-Orthodox yeshiva students study separated by plastic partitions amid the COVID-19 pandemic, on Aug. 25, 2020, in the southern Israeli city of Sdreot. - MENAHEM KAHANA/AFP via Getty Images

“Our greatest fear is that the gap between the weaker and stronger sectors of the population will expand in such a way that it cancels all the achievements of an entire decade,” Minister of Welfare Itzik Shmuli told Al-Monitor.

Israel may be an economic success story, but the coronavirus has revealed how large these gaps are, and how many Israelis don’t share in the wealth. Many children don’t have a computer at home, and in many hundreds of thousands of homes, several children have to share a single computer. Attending school via Zoom actually increases the gap between poor students and their wealthier friends.

Countries all around the world have come up with all sorts of solutions for education in the time of the coronavirus. Israel seems to be less successful, particularly when it comes to its sectors with weak or no access to the internet and technological tools like laptops and tablets to continue their studies.

Like the rest of the Israeli government at the start of the pandemic, the Ministry of Education was caught unprepared. Its focus was on the impending election and the transition period before a government was formed. The transition to distance learning in March 2020 depended on teachers producing video classes, but most teachers were never trained for the task. They therefore spent many long weeks learning to do so while simultaneously trying to teach.

Meanwhile, new Education Minister Yoav Galant, who was appointed in May, was busy fighting with the teachers unions on how to open the upcoming school year. While they did initially open, schools closed again two weeks into the new school year when the second wave of the coronavirus struck the country.

An attempt was made to create a curriculum for remote learning available on the Ministry of Education’s website. However, the state comptroller determined that the curricula were not suited to the specific needs of different sectors of the population, especially the ultra-Orthodox and Arab sectors, the populations affected most by economic disparities.

An Oct. 26 report by the state comptroller’s office found that the Ministry of Education does not even know how many of the students stuck at home lack computers or basic services such as an internet connection. A report by the senior economist at the Finance Ministry found that some 20% of students (about 350,000) do not have a computer at home.

The Education Ministry decided to purchase about 150,000 computers to cover the shortage. However, distribution of them only started this week, five months after a budget was made available for it. Only half of those who need a computer will get one by January.

A senior government official told Al-Monitor on condition of anonymity that the way that the shortage of computers and distance learning has been handled is farcical. “The coronavirus caught the country with its pants down,” he said, “both in terms of the severity of the problem and of plans to handle it.”

This vacuum is being filled by various nongovernmental organizations and informal groups that are collecting money and equipment to distribute to needy children.

Attorney Roni Malkai Ihrig is CEO of the philanthropic Israeli Public Forum for Youth Villages and Boarding Schools for Children at Risk. She said that the problem became apparent after the organization surveyed students' needs at the start of the first lockdown. There is an enormous shortage of computers and other equipment among both students who were sent home from the residential facilities and students who remained in them. The organization immediately began collecting contributions to purchase 5,000 computers. As of this week, the organization has managed to acquire 1,600 desktop and laptop computers and tablets to distribute to this population of students.

On one hand, Malkai is excited by the response to her initiative. On the other hand, she doesn’t understand why the state institutions are so far behind. "The heads of these institutions write to tell me that we saved these children’s lives. But the Ministry of Education has been dealing with this crisis for eight months now, and it has yet to begin distributing computers to the places that need them most. Philanthropy is replacing the state. What would have happened if we didn’t do this? In the era of the coronavirus, socially oriented organizations are replacing the government.”

Malkai says that the various ministries should learn from civil society organizations how they can perform better and assist the neediest people in society. “If, as a small non-profit, we could bring 800 computers and tablets from China in a month, why is it that government ministries are still issuing tenders and examining the results? It really increases the social gap and hurts the children who need this help the most. These are children who come from broken homes, yet they continue to suffer because of government bureaucracy and incompetence. How can the government possibly claim that it will take another half-year for the computers to arrive?! These children will be lost to society and society will pay a steep price for it."

Importantly, the Ministry of Education also suffers from the government's zigzagging between opening and closing schools. For instance, as the second wave of the virus comes to an end, students in the lower grades will start returning to school. Because of the back-and-forth, however, towns and local authorities have decided on their own to open schools more broadly for the lower grades. The great fear now is that if a third wave breaks out over the next few months, schools will be shut down again. If that happens, one out of every five school-aged children in Israel will lack the infrastructure for distance learning and the gap between them and their peers will only get larger.