Intel: New bill in Congress would push for Israel to get bunker-busting bombs

The bill was announced the same day the International Atomic Energy Agency said Iran is building an underground centrifuge facility at Natanz. 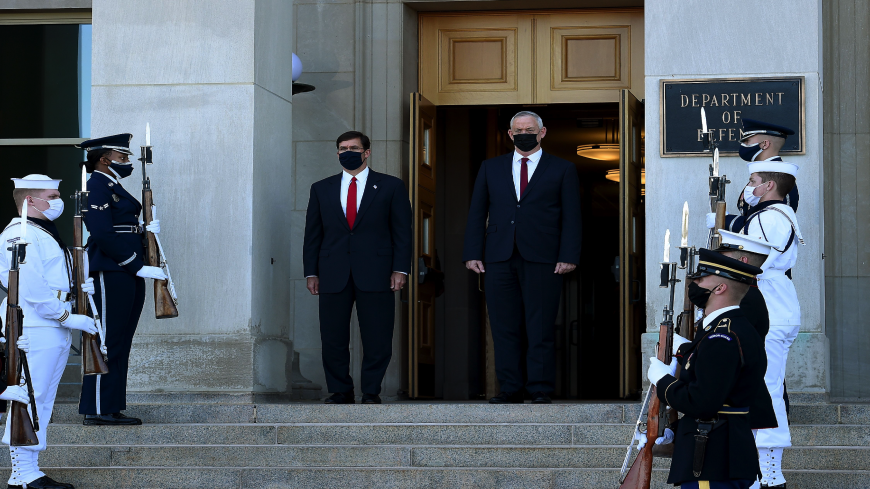 US Secretary of Defense Mark Esper (L) welcomes Israeli Defense Minister Benny Gantz during an honor cordon at the Pentagon on Sept. 22, 2020, in Washington, DC. - OLIVIER DOULIERY/AFP via Getty Images

A pair of US lawmakers are set to introduce a bill this week that would require the Pentagon to consult with Israel and report to Congress about whether transferring bunker-busting bombs to Israel could help prevent Iran from obtaining a nuclear weapon.

Reps. Josh Gottheimer (D-NJ) and Brian Mast (R-FL)  introduced the United States-Israel Common Defense Authorization Act “to strengthen Israel’s qualitative military edge in the region and secure both the US and Israel from the threat of a nuclear-armed Iran,” Gottheimer’s office announced Tuesday.

“We must ensure our ally Israel is equipped and prepared to confront a full range of threats, including the threat of a nuclear-armed Iran,” he said.

Why it matters: The bill comes one day after the International Atomic Energy Agency announced that Iran has started building an underground nuclear centrifuge facility at Natanz, after an explosion at the site in July that Tehran called “sabotage.”

Foreign sale of the massive weapon is currently barred by US law. The MOP is six times as heavy as the largest bunker-buster the United States is known to have sold to Israel — the 5,000-lb. GBU-28. The US Air Force is only authorized to deploy the MOP on the B-2 bomber, which Israel does not possess.

The Trump administration raised controversy on Capitol Hill and in Israel when news leaked in August that it had floated an offer for the United Arab Emirates (UAE) to acquire the F-35 Joint Strike Fighter — a highly advanced jet that only a few US allies possess, including Israel.

Upon Gantz’s return to Israel on Friday, the government announced it would not oppose the US sale of “certain weapons” to the UAE.

The bill, sponsored by Gottheimer and Mast, is the latest introduced this month by lawmakers seeking to bolster Israel’s military superiority in the Middle East.

Last week, Sens. Dianne Feinstein (D-CA) and Bob Menendez (D-NJ) introduced a bill that would require the administration to certify to Congress that countries seeking to purchase the F-35 have provided “specific, verifiable and reliable assurances” that the transfer will not jeopardize Israel’s security.

Earlier this month, Rep. Brad Schneider introduced a bipartisan-backed bill that would give Israel an effective veto on major US arms sales to the Middle East.

What’s next: The bill is set to be introduced this week.

Know more: Rina Bassist shows that the spat between Gantz and Prime Minister Benjamin Netanyahu over the latter’s knowledge of the F-35 proposal for the UAE is not over.