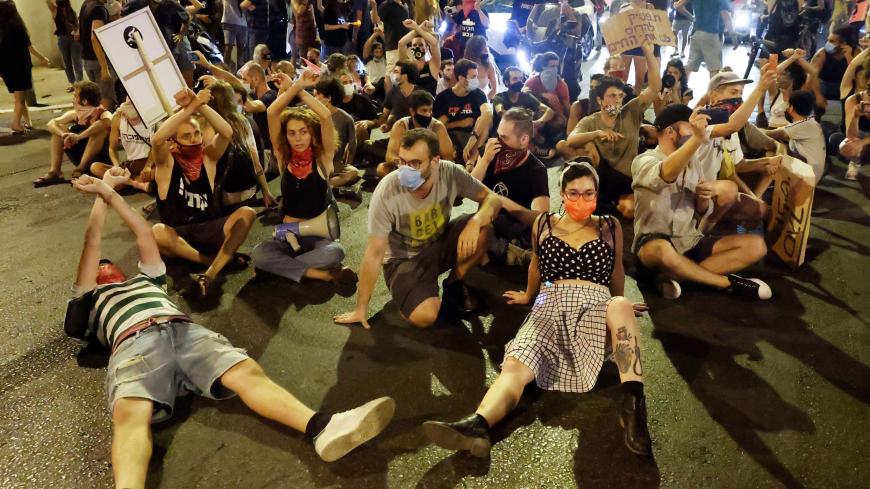 Israeli protesters sit on the ground during a demonstration against the Israeli prime minister and against the second nationwide lockdown imposed by the government in a bid to stem the increase of COVID-19 coronavirus cases, in the coastal city of Tel Aviv, on Oct. 1, 2020. - JACK GUEZ/AFP via Getty Images

About 1,000 demonstrations took place the night of Oct. 1 across Israel. At Tel Aviv’s HaBima Square there were around 3,000 demonstrators who protested against Prime Minister Benjamin Netanyahu; the other gatherings were much smaller. Unlike the local demonstrations, the rather large Tel Aviv protest was dubbed a spontaneous demonstration with no specific groups claiming responsibility for organizing it.

These protests were held as the Knesset approved government emergency measures banning Israelis from traveling over 1 kilometer (0.6 mile) from their homes to attend a protest, and limiting outdoor gatherings to a maximum of 20 people per group. Israel entered a nationwide lockdown on the eve of the Jewish New Year on Sept. 18, but the continued rise in coronavirus cases has prompt greater restrictions on movement and gathering.

The Black Flags movement has been calling on Netanyahu since March to resign over his indictment for bribery, fraud and breach of trust, and over his failure to curb the spread of the pandemic. For several months now the movement has staged weekly Saturday night demonstrations outside Netanyahu’s official residence on Balfour Street in Jerusalem. In the past few weeks, the movement has accused the prime minister of attempting to stop these rallies against him by means of undemocratic legislation whereby the prime minister pretended that such measures were necessary to halt the spread of the virus. Netanyahu has rejected these accusations, saying the measures were indeed necessary to combat the pandemic.

On Sept. 25, after the government decided to reinforce restrictions on demonstrations, several anti-Netanyahu groups announced that they would change their plans for demonstrations scheduled for the next day and follow social distancing regulations so that the government would have no reason to ban the protests. Many people, instead of attending rallies, chose to join protest convoys on the road leading to Jerusalem and in other places. Hundreds of vehicles took part.

After the Knesset adopted anti-demonstration measures Sept. 30, the Black Flags movement published a map of Israel, with hundreds of spots where small demonstrations could take place — main intersections, public squares, etc. The map offers Israelis demonstration spots that should correspond to the 1 kilometer restriction. The movement said it would continue to organize local rallies on Thursday and Saturday nights. They are hoping for some 2,000 “neighborhood protests” Oct. 3.

The anti-Netanyahu group Crime Minister announced a march, to start Oct. 8, from the north of Israel to the prime minister’s residence in Jerusalem. It was dubbed “the great submarine rally,’’ although it was unclear how this event would unfold with the new regulations in place. Most anti-Netanyahu groups said they would obey the new regulations and operate in a legal manner.