Iran seeks to maintain the flow of hard currency from Iraq to help it overcome the US sanctions. 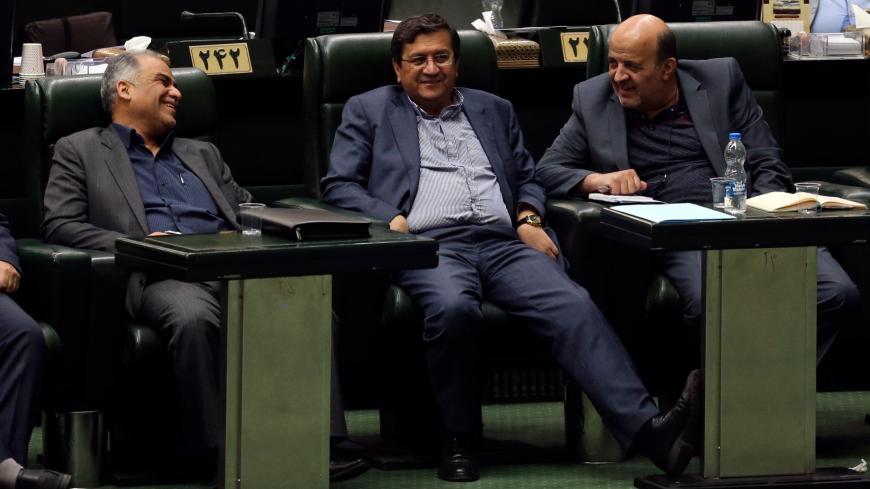 Abdolnaser Hemmati (C), governor of Iran's central bank, listens to a speech in parliament in Tehran on Oct. 7, 2018, over a bill to counter terrorist financing. Hemmati recently paid a trip to Baghdad in what was seen as an effort to get Iran more badly needed hard currency. - ATTA KENARE/AFP via Getty Images)

Iran sees in Iraq an economic lifeline and the only solution to circumvent the US sanctions ordeal, through formal and informal means.

A source at the Iraqi Central Bank who was present at an Oct. 12 meeting between Hemmati and his Iraqi counterpart, Mustafa Ghaleb, told Al-Monitor, “Hemmati left the meeting empty-handed regarding the settlement of dollar-denominated debts to Iran.”

The source, who spoke on condition of anonymity, said, “Hemmati asked for the settlement of these debts in dollars. But his Iraqi counterpart assured him that his country is committed to the decisions of the US federal bank.”

Following the meeting, Hemmati said in a statement that Iraq owes his country $5 billion. His statement coincided with Iranian news reports that Iraq will soon release Iran's funds.

In a move that did not follow standard protocol, Iraqi Prime Minister Mustafa al-Kadhimi hosted Hemmati during his visit to Baghdad. “This reflects the seriousness of the Iranian financial impasse,” economic expert Abdul Rahman al-Mashhadani said in a press statement to the Al-Araby Al-Jadeed newspaper.

He added that the Iranians are looking for a new solution through various banks, and that this required the presence of the Iranian central bank governor in Iraq.

Although Iraq formally adheres to the sanctions imposed on Iran, hard currency keeps flowing from it to Iran on an ongoing basis. Iraq is always at the top or near the top of countries that import products, including much-needed electricity, from Iran. Such transactions help Iran secure hard currency. However, a number of experts say that at least some of the Iraq money is going to Iran without any Iranian goods being imported.

The settlement of Iraq’s debts to Iran was raised during Kadhimi's visit to Tehran in July and his meeting with Iranian Supreme Leader Ali Khamenei. The Iraqi prime minister affirmed that his country cannot pay these debts in dollars since it is committed to the US sanctions.

However, according to an Iraqi government source who spoke with Al-Monitor on condition of anonymity, “Iran managed during the government of [Prime Minister] Adel Abdul Mahdi to get some debts settled in US dollars. These funds were sent to China and from there to Iran.”

Not only that, a large number of private banks in Iraq, as well as armed factions, are aligned with political parties close to Iran. These have played a major role in helping Iran secure hard currency through imports between the two countries.

On Oct. 19, former Iraqi Finance Minister Baqir Jabr Solagh said in a press statement that Iraq must distance itself from the conflict between the United States and Iran and find a way to pay Iran what it owes in order to prevent Iran from cutting off Iraq's electrical power supply.

Meanwhile, the financial situation in Iraq remains unstable. On Oct. 14, Ghaleb projected a drop in the country’s foreign reserves due to an increase in import financing and a decline in dollar-denominated revenues.

In an interview with Al-Monitor, a former economic expert at the General Secretariat of the Iraqi Council of Ministers, Salam Sumaisem, said she was concerned about reports that there could be a truce deal between the United States and armed Shiite factions that would allow Iraq to release money to Iran.

She said, “The visit of the governor of the central bank of Iran aimed to test the pulse of the Iraqi government as to the debts owed to Iran.”

But a former economic adviser to the Iraqi government told Al-Monitor on condition of anonymity, “The visit of the governor of the central bank of Iran to Iraq is not related to the funds that Iraq owes, but rather involved other funds funneled to Iran through Iraqi government institutions controlled by the parties and factions loyal to Tehran.”

It seems impossible to end the flow of dollars from Iraq to Iran. Iraqi private banks loyal to armed parties and groups have great influence over the Central Bank and have been reported to receive more than $100 million from it per day; a story in the Arab News last year detailed how middlemen were being used to convert Iraqi dinars into dollars at the central bank’s daily auction of hard currency, with the dollars then getting transferred to Iran.

All this prevents the state, which is officially committed to US sanctions, from coming close to fully enforcing them.