Iraq paid Kuwait a final installment of war reparations more than 31 years after the invasion of Kuwait, which may free up funds for new domestic projects. 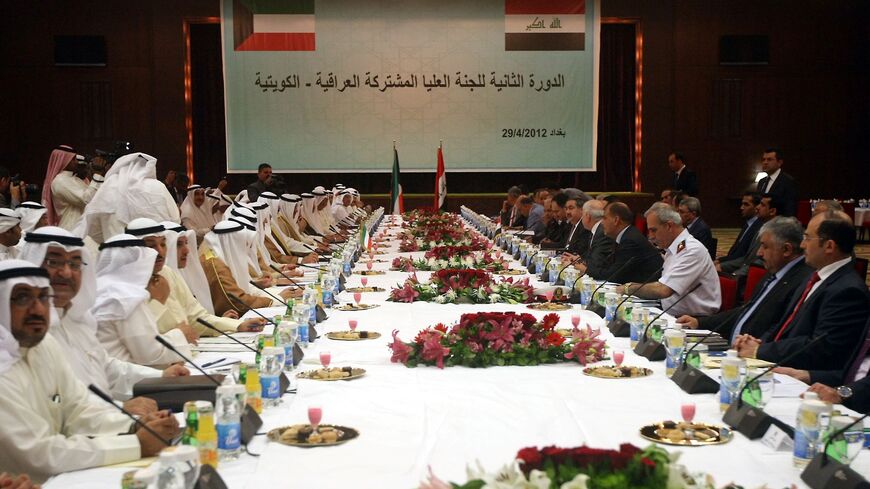 Iraqi and Kuwaiti (L) delegations attend the joint meeting on April 29, 2012 in Baghdad, Iraq. Iraq and Kuwait initiated the formation of joint committees to resolve problems existing between them including war compensation after the invasion of Kuwait by Saddam Hussein's regime in 1991. - Ahmad Al-Rubaye-Pool/Getty Images

Iraq's economic situation in 2022 should benefit from Baghdad's paying the final installment of compensation to Kuwait for the invasion of 1990.

On Dec. 22, the Central Bank of Iraq announced the final payment to Kuwait, amounting to $52.4 billion, more than 31 years after the invasion of Kuwait [THE $54 BILLION IS THE FINAL PAYMENT, OR CUMULATIVE PAYMENT?]

Despite the payment, Salih pointed out that Iraq is still carrying a debt on the books with international creditors, although that could be resolved soon. "This debt is nominally owed to about 12 countries, including four Gulf countries, and belongs to the pre-1990 period," he said. Under the Paris Club agreement signed between Iraq and its international creditors, the amount should be written off by 80 percent, or $41 billion, so "then it would be equivalent to only $8-9 billion as a result of the Iran-Iraq war, and I expect it to be completely written off.”

Salih believes added, “The annual cumulative amount of these compensations provides at least $2 billion on an annual basis, which benefits Iraq’s budget, be it in settling the upcoming annual foreign debt dues or in providing sums that go to productive investment projects.”

“Settling compensation debts improves the country’s financial capabilities so long as these are employed in development and investment projects,” Salam Sumaisem, a former economic expert at the General Secretariat of the Iraqi Council of Ministers, told Al-Monitor. “The upcoming financial abundance should not be wasted like many opportunities were wasted over the past years.”

Abbas Abboud, an academic and editor-in-chief of the Iraqi newspaper Al-Sabah, told Al-Monitor that “the final payment will reduce the psychological impact on Iraqis and will push toward balanced political relations with the Gulf countries in general and with Kuwait in particular.”

Qassem al-Gharawi, a political analyst from the Iraq Institute for Strategic Studies, told Al-Monitor that “there are government parties trying to redirect the funds that were intended for the settlement of compensation toward establishing sovereign funds for generations to come.”

However, he said that the money formerly earmarked for Kuwait would be better placed in a program for profitable and sustainable development projects  outside the government authority.

Manar al-Obaidi, an economic analyst and official spokesperson for the Extension Movement, told Al-Monitor that the settlement will increase Iraq’s income, "especially considering that 5 percent was deducted from oil sales to pay such compensation.” Iraq’s foreign debt has fallen to $20 billion or about 15 percent of GDP, which he called "a low percentage compared to other countries.”

But, he added, "the fact remains that growth in infrastructure facilities and services is still low.”

Hussein Thagheb, an economic media specialist and economic editor for the Iraqi Assabah newspaper, told Al-Monitor that the former compensation money could be used to support "small and medium-sized enterprises, provided such enterprises are subject to monitoring and appraisal.”

Most of Iraq’s debts resulted from the uncalculated military adventures of the former Iraqi regime. The final payment to Kuwait could lead to a financial abundance, if the economic decision-making process is reformed away from the routine administrative mentality.