Despite nominal moves to diversify its sources of revenue, the Iraqi government's dependence on falling oil prices and the cost of its war against the Islamic State mean the Iraqi economy is drowning in debt. 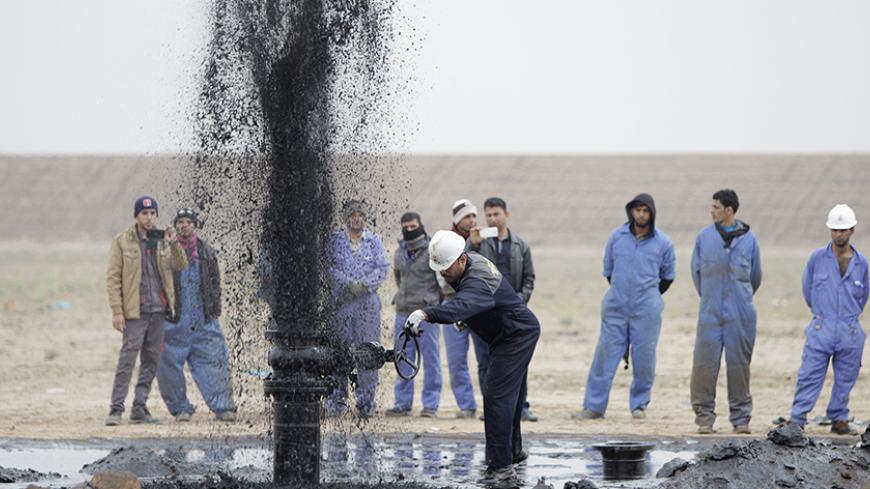 Iraqi workers stand near a pipeline as it ejects oil at Al Tuba oil field in Basra, southeast of Baghdad, Feb 19, 2015. Falling oil prices have hit the Iraqi economy hard as the country relies on oil revenues to fund 97% of state spending. - REUTERS/Essam Al-Sudani

BAGHDAD — Noura al-Bajari, a member of the Iraqi parliament's Economy and Investment Committee, expressed fear in a press statement Aug. 8 that Iraq will be unable to pay off its debts. She cited dropping prices for the oil upon which the country relies and the costs of the war against the Islamic State, with which the government has fought for control of Iraqi cities since June 2014.

In an interview with the local Iraqi Al-Mada Press, Bajari predicted a very bad scenario for the Iraqi economy should debts remain outstanding. “Iraq would have to face dire economic conditions akin to the prior-2003 period, when the accumulated debt had reached $125 billion,” she said.

Bajari’s apprehension seems justified, especially since the Iraqi government has resorted to domestic and foreign borrowing to be able to bridge the spending deficit as oil prices started to plummet in the summer of 2014. Of note, Iraq depends almost exclusively on oil revenues to finance state spending, and there are no official statistics available on the current size of the debt.

Iraq’s Central Bank has been trying to employ a policy of financial transparency by publishing data on spending, debt and the country’s financial status online. However, the website only displays basic information from 2010 that is not sufficient to gauge the actual size of outstanding debt since the fall in oil prices in 2014.

Mazhar Mohammad Saleh, a prominent Iraqi economist and the economic adviser to Iraqi Prime Minister Haider al-Abadi, acknowledged that there are no official statistics but discussed Iraq's estimated internal and foreign debt in a phone interview with Al-Monitor. Saleh carefully traced the history of Iraq’s debt under the previous regime and the successive Iraqi governments following the invasion in April 2003. “Iraq is indebted to 51 countries, including 10 creditors outside the Paris Club,” he said. “Iraq has borrowed around $9 billion from the Paris Club countries, while it owes about $6 billion to creditors outside the club.”

There is also “$2.7 billion owed to international private sector companies with about 5% interest annually,” Saleh said.

According to Saleh, the former regime saddled Iraq with “odious debt” of nearly $10 billion that the government is not bound to pay off entirely.

Saleh further said that following Iraq’s 2003 invasion, the country’s debts were “not very significant," explaining, "Foreign debts amounted to $7 billion, while the domestic debt was standing at around $34 billion, including the debts amassed by the former regime.”

He added, “As per the gross domestic product, the debt ranges around 60%, which is a safe percentage. There are also international standards for dealing with debt. Yet that does not suggest Iraq should not be cautious in paying off its safe debts.”

Saleh also noted, “The International Monetary Fund requested the Ministry of Finance hire an international company to oversee Iraq’s foreign debts in a bid to set forth a mechanism to repay them.”

In the same vein, Abdul Rahman al-Mashhadani, an economics professor at Baghdad’s Al-Mustansiriya University — one of the oldest Iraqi universities — said that the Iraqi government is partly to blame for not dealing transparently with debt. “The absence of official statistics on the size of debt indicates a lack of transparency vis-a-vis the country’s financial situation, as economists and society are kept at bay,” he told Al-Monitor. He noted that some indications suggest that Iraq “owes $69 billion in foreign debt,” stressing, “These funds have never been used in investment but in consumption fields, which makes it more difficult for Iraq to settle them.”

It appears that Mashhadani’s reading is sound, as Abadi’s program provided for the diversification of sources of income. Yet two years later, the government is still closely monitoring the oil price data as it continues to rely on oil proceeds.

Mashhadani added, “The government lacks a strategy to deal with the debt, which could cause the country to further sink into debt and thus resort to mortgaging oil to pay it off."

Iraq’s foreign debts have always been a thorny issue that calls for vigilant care, as Saleh stated. The successive governments ought also to stop relying on oil revenues to pay off domestic and foreign debts in order to help Iraq escape its economic quagmire.