Is another economic crisis looming in Iraq, with dropping oil prices?

Iraqis are expressing great concern about the low oil prices amid the coronavirus outbreak, as the government may not be able to pay their salaries in the coming months. 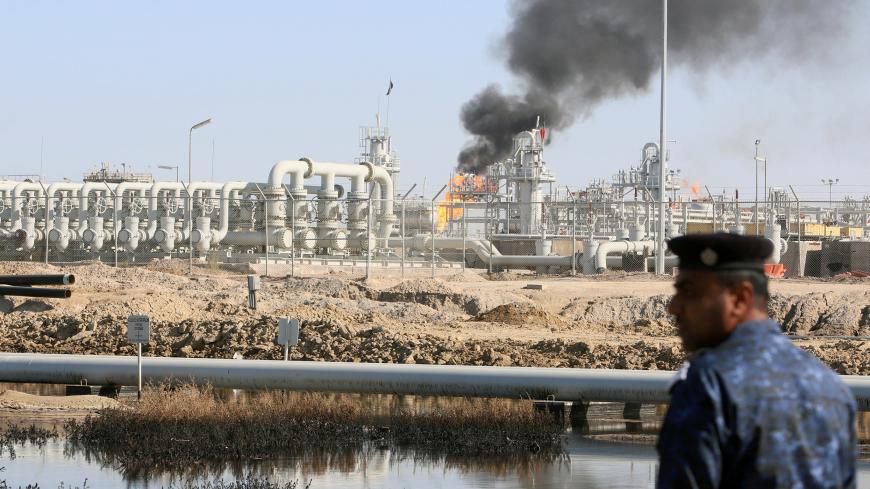 A policeman is seen at West Qurna 1 oil field, which is operated by ExxonMobil, Basra, Iraq, Jan. 9, 2020. - REUTERS/Essam al-Sudani

Political and security crises in Iraq have been escalating, and the coronavirus outbreak has recently been added to the list. Meanwhile, news about the dropping oil prices has added fuel to the fire, and Iraqis are all at risk. According to Mazhar Mohammad Saleh, economic affairs adviser to the Iraqi government, 93% of Iraq's budget relies on oil exports.

On March 14, Saleh said, “Iraq has lost half of its financial revenues, with oil prices dropping to $30 [per barrel].”

According to the 2020 budget draft that the government proposed and awaits voting on in the parliament, the budget is $135 billion, and the deficit amounts to $40 billion. What's worse, the numbers were calculated based on a selling price of $56 per barrel of oil. But this price has been almost halved.

Most of the Iraqi budget goes to the salaries of the 7 million employees as operating expenses. The drop in oil prices will directly affect them, and their only income will be government salaries.

Salam Smeisim, former economic adviser to the Ministry of State for Civil Society Affairs, told Al-Monitor, “The dropping oil prices are directly affecting the situation of Iraqis because oil accounts for 93% of the Iraqi budget. Besides, Iraq has a rentier and consumption budget rather than a developmental one. All revenues from oil and other resources feed salaries.”

She added, “The dwindling revenues lead to dropping salaries and this is a new disaster for Iraqis, in addition to the deficit reaching $51 billion. All these are signs that the Iraqi budget does not follow a financial and economic logic. The salaries and privileges of high-ranking employees range between $7 and $8 billion. The government must cancel these privileges and reduce the salaries so that lower-ranking employees do not bear the brunt.”

In an attempt to weather the impact of dropping oil prices, the Iraqi parliamentary Economic and Investment Committee proposed March 12 a series of steps, including halting investment spending and curbing operational spending; making agreements with creditors to delay the settlement of Iraq’s local and foreign debt until the financial situation improves; and collecting state debt from the cellphone and telecommunication companies.”

The government also proposed “halting payment of money to investors in the electricity sector; working on boosting government revenues; supporting the Treasury with the value of the region’s exports of crude oil and border outlets; and reviewing exchange rates of the Iraqi Central Bank to secure prices that do not affect citizens and that ensure the salaries of state employees.”

Issam al-Jalabi, oil expert and minister of oil in 1987-1990, said in press statements March 9, “Iraq will lose billions of dollars because of its loss of huge oil revenues, which will impact the provision of services, medication and food, while the country needs all available funds to face the COVID-19 outbreak.”

Outgoing Prime Minister Adel Abdul Mahdi called for measures that can alleviate the impact of dropping oil prices on Iraq. However, his government did not announce these measures or their mechanisms, as it has its hands full with the coronavirus crisis, which has not been allocated an emergency budget. Iraq has been facing an economic crisis since the first day oil prices dropped.

Abdul Mahdi has been trying to reassure Iraqis regarding the dropping oil prices, saying, “This is just a bump in the road, and it does not mean our economy is collapsing or that the state is going bankrupt.” But his reassurances do not match the warnings of economic experts.

News about dropping oil prices shocked many Iraqis — mostly state employees whose salaries depend on oil revenues — who voiced their concerns on traditional and social media.

State employees and experts in Iraq expect the 2020 financial budget to suffer hugely, and they expressed their concerns about the government’s inability to pay salaries in the coming months. This in itself constitutes a new challenge for the Iraqi government, in addition to the political, security and social crises, especially those related to the US-Iranian conflict, the coronavirus outbreak and the ongoing protests in southern Iraq.

The financial revenues that entered Iraq in February amounted to $5 billion, when the selling price of oil was $51 per barrel. But this figure will not enter the Iraqi state budget for March, because of the collapse of the OPEC-Russia agreement to reduce supply.

Iraqis might be in the eye of the storm in the coming months, unless oil prices rise again and the current or transitional government meant to be formed finds solutions for the crisis.