How much will $15 billion IMF loan really cost Iraq?

The International Monetary Fund's loan to the Iraqi government may come with too many strings attached. 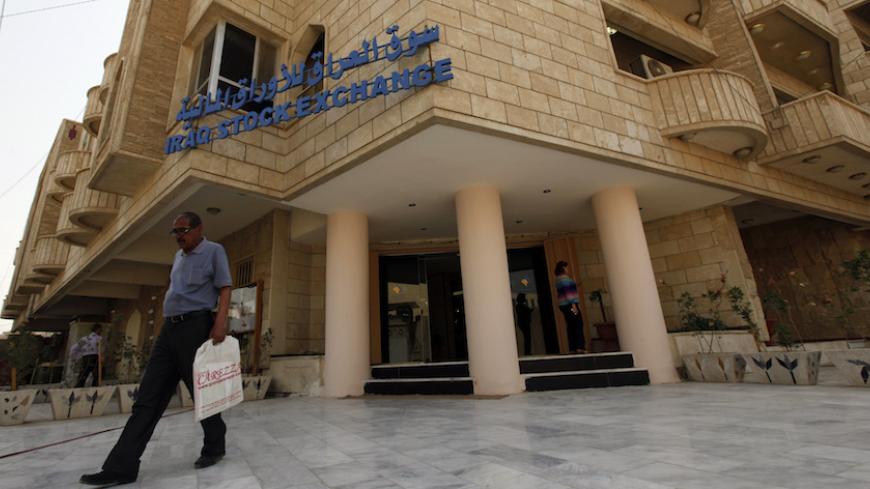 BAGHDAD — On May 19, Iraq signed an agreement with the International Monetary Fund (IMF) for a loan for as much as $15 billion over the next three years. Observers are wondering how Iraq will be able to repay the loan and meet the conditions imposed by creditors, which include various countries and the World Bank. One such condition is that Iraq must lift its oil and food subsidies.

The Iraqi Ministry of Finance said the IMF Stand-By Arrangement (SBA) will help Iraq in its battle against the Islamic State (IS) to liberate Iraqi territory, while also helping cut the budget deficit, which is projected at $25 billion, a figure that could worsen because of lower oil prices. The ministry said the loan will not affect government spending on social and health services, but rather it will bring about real financial and economic reform.

Iraq's previous experience with the IMF doesn't encourage optimism. In 2004, the IMF imposed an economic reform package that required Iraq to privatize some sectors and raise fuel prices in exchange for reducing and rescheduling the country's Paris Club debt, estimated at $50 billion. Iraq failed to meet those conditions.

Sirhan Ahmed, a member of the parliamentary finance committee, told Al-Monitor the new IMF loan will only make things worse in the long run.

"Iraq does not need a loan from the IMF, as this loan will eventually turn into a set of conditions and dictations on the Iraqi economy. Instead of borrowing, the government should have resorted to retrenchment and issuing bonds while earnestly fighting corruption to address the budget deficit."

Majda al-Tamimi, another finance committee member, told Mawazin News on May 17 that the loan "will lead to corruption."

"The Central Bank's governor held meetings and negotiations concerning the IMF loan, knowing that he sells $126-$140 million from the state's treasury funds through currency auctions on a daily basis," she said, referring to the fact that funds are available, yet the bank's governor is using Iraqi money in buying and selling operations, not to support the budget deficit."

Tamimi criticized some ministers for boycotting government meetings. She called for the loan to be canceled, alleging that some political parties said they would only return to parliament in exchange for financial shares on behalf of their constituents.

The IMF loan is also causing new problems between Baghdad and the Kurds. On May 18, Samira al-Moussawi, a member of parliament for the ruling State of Law Coalition, accused Kurdish parliament members of agreeing to return to Baghdad only in return for their party receiving 17% of the loan. However, the Kurdistan Alliance parliamentary bloc, which was boycotting the parliament after Sadrists stormed the parliament on April 13, rejected the accusation.

"Moussawi is trying to create new problems between Baghdad and the Kurdistan region, and her accusation does not deserve a response, as she is not competent in the field of economy and does not know the details of the agreement that has been signed with the IMF," Kurdish Alliance representative Ahmed Hama, a finance committee member, told Al-Monitor. "She does not know that the loan is aimed at supporting the general budget and that the [Kurdistan] region has a share in the budget."

Hama added, "The IMF conditions on Iraq in exchange for the loan favor the government, not the citizen, as these include the removal of subsidies on the ration card, fuel and social welfare in addition to tax increases. Everyone knows this and the government cannot deny it."

But the government does deny that the conditions IMF has imposed will be difficult to meet. Parliamentary parties, however, claim the opposite.

Economic expert Abdul Rahman al-Mashhadani told Al-Monitor that the SBA is similar to the 2004 agreement that Iraq signed but didn't uphold.

"The IMF will help provide the loan to Iraq from several parties: The IMF will provide $830 million; the World Bank, about $5 billion with an interest of 1.5-3%; and the rest will come from other organizations and countries and will be guaranteed by the IMF at an interest rate of 7.5- 8%, provided that Iraq repays the loan and its interest in a very short period of seven years," Mashhadani said.

"Among the conditions set by the IMF is that the government decrease subsidizing fuel prices and reformulate the budget terms and fund allocations to reduce government spending, especially in the operating budget. A large number of parliamentary blocs have rejected this on the grounds that the budget is a law that should remain untouched," he added.

The government is facing a predicament, and it has failed to deal with the Iraqi public with transparency and clarity in a bid to end the controversy over the IMF conditions. In 2004, Iraq refused to continue to abide by the IMF's terms after 2007 because of a hike in oil prices and concerns over the public's wrath. Iraq consequently lost the confidence of the global market and economic organizations. Now, the current drop in oil prices will force the country to defer to the will of the IMF and face the wrath of citizens, who will have to pay more for fuel, consumer goods and services as the subsidies are lifted.