The arrest and forced removal of Iraqi government officials signals attempts to curb rampant corruption that has plagued the country. 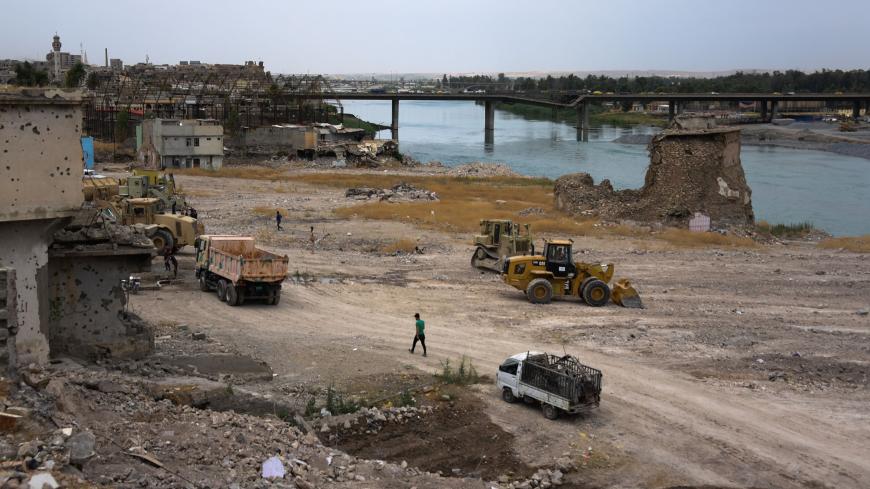 On June 15, 2020, debris is cleared that was still left from the Battle of Mosul, when Iraqi forces and allied militias regained the northern Iraqi city from the Islamic State group in 2017. The capital of Ninevah province was seized by the jihadis in 2014; the nine-month offensive to recapture Iraq's second city left many neighborhoods in ruins. A former governor of Ninevah province now stands accused of absconding with a signficant amount of reconstruction money. - ZAID AL-OBEIDI/AFP via Getty Images

Iraq’s anti-corruption commission announced last week that it had arrested the former governor of Ninevah province, Nawfel Akoub, who was accused of embezzling millions of dollars from government coffers, including aid for people displaced by the Islamic State.

Akoub’s case highlights the efforts of Iraqi Prime Minister Mustafa al-Kadhimi to rein in corruption amid resistance from entrenched parties and elites, popular street demonstrations and violence from foreign-backed militias.

A major boat accident near Mosul is what initially sank Akoub. In March of 2019, a ferryboat capsized in the Tigris River that killed more than 100 people. As the governor of the region, Akoub was accused of negligence. A request by then-Prime Minister Adel Abdul Mahdi to immediately dismiss the governor was approved by Iraq’s parliament.

Akoub was eventually slapped with US sanctions last year on corruption charges. He escaped to the semi-autonomous northern Kurdistan region, where he lived as a fugitive. In March 2020, the Iraqi judiciary demanded that authorities in the region arrest the former governor. Akoub was arrested in Mosul while paying bail for another case.

Akoub and other officials were charged with misappropriating about $64 million of public funds. That money was meant for reconstruction of his former province, which had been left in ruins by more than two years of Islamic State rule, followed by fierce fighting with Iraqi-led forces to retake the area. Part of the money was allocated to rebuild two hospitals in Mosul as well as to support people who had lost their homes in the conflict.

Corruption is rampant across the country. Iraq ranks among the world’s worst offenders when it comes to corruption, according to Transparency International’s annual Corruption Perception Index.

Since 2003, the year the US-led invasion ousted Saddam Hussein, tens of billions of dollars of public funds have reportedly gone missing.

In October 2019, as corruption and other allegations of government mismanagement boiled over, tens of thousands of Iraqis marched in Baghdad and other cities to protest the country’s rampant misdealings, unemployment and poor services. More than 500 people were killed during the demonstrations, which lasted for months.

Since his appointment in May, Iraqi Prime Minister Mustafa al-Kadhimi seemed focused on gutting the system. The former journalist and political activist rode into office as a supporter of the protesters' demands and has  pressured institutions to rein in corruption, oftentimes by purging those in power.

In July, Kadhimi sent federal forces to replace senior officials at key border ports. This included replacing eight customs officials at Basra’s Umm Qasr Port, an important checkpoint for the oil industry. The group was replaced with a garrison that rotates every few weeks so that it doesn’t set roots and become easy to manipulate.

One month later, Kadhimi formed a special committee, reporting directly to his office, to investigate cases of corruption and exceptional crimes.

In September, three senior Iraqi financial officials were arrested on corruption charges, including Bahaa Abdul-Hussein, the director of the Qi Card company. With branches across the country, the company is responsible for distributing salaries to employees and retirees. In recent years, the company has been accused of mismanaging salary and pension distributions.

The idea of tackling corruption by going after selected big players such as Akoub and senior customs and government officials could be seen as an attempt to make sure that everyone else operates more carefully.

But critics of Kadhimi’s efforts say the prime minister has provided no road map or clear path for fighting systemic corruption. As one source told Al-Monitor, forming a special task force is nothing significant in Iraq because the country has a committee for everything.

Others accuse the prime minister of playing it safe by only targeting individuals who lack significant political backing or hold ties to armed militias. To enforce corruption successfully, the source said, Kadhimi needs a blanket approach that hits all sectors equally.

And time is running out. On Sunday, the protests reignited as thousands again took to Iraq's streets to mark one year since the mass anti-government protests began.

There is also the possibility that Kadhimi will not remain prime minister after the country goes to an early vote, possibly in 2021; he is not directly elected by the Iraqi people, but rather by the parliament. Many lawmakers may not like the anti-corruption efforts that have often targeted their circles.

“This sort of stuff has to be persistently kept up or it doesn’t become permanent,” Knights said. “And it’s very uncertain whether Kadhimi will still be there by the second half of 2022 and so his guys are focusing on doing as much as they can as quick as they can and hoping that it will set in motion momentum that will keep going even if they are not reappointed.”