Leaders of Iran’s armed forces said they were testing air defense preparedness in a large-scale exercise involving half of the country’s airspace. 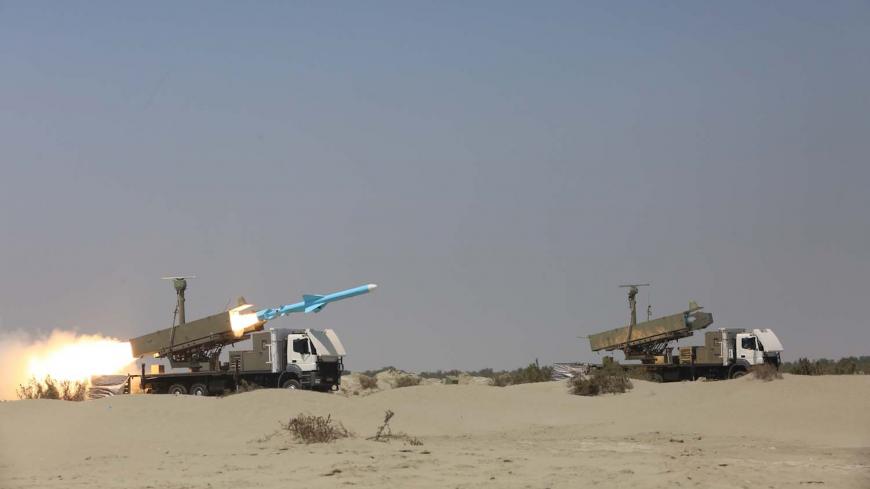 A handout picture provided by the Iranian army's website on Sept. 11, 2020, shows an Iranian Ghader missile being fired during the second day of a military exercise in the Gulf, near the strategic strait of Hormuz in southern Iran. - Iranian Army office/AFP via Getty Images

According to military spokesman Abbas Farajpour, the drills were conducted in a vast area including half of Iran's airspace with the purpose of testing preparedness and boosting the operational experience to protect one of the country’s “sensitive” centers, which he did not specify. “Maintaining security is a job with no leave, and invites constant readiness among armed forces against any threat,” he added.

The exercise followed some of Iran’s regional foes, including the United Arab Emirates and Bahrain, normalizing ties with Israel. Tehran has denounced the Arab-Israeli rapprochement as a destabilizing factor.

During the war games, medium and high-altitude objects were targeted by two missile defense systems developed by the IRGC and the army. Using epic terms in praise of the exercise, an IRGC-linked media outlet warned, “Any eagle transgressing Iran’s territorial airspace [will] find its wings clipped.”

In June 2019, Iranian forces downed an American drone over the strategic Strait of Hormuz in the Persian Gulf after the aircraft allegedly entered Iranian airspace. US officials dismissed the Iranian version of the incident but chose not to retaliate.

Iran’s state TV aired footage of multiple types of missiles used in the drills on Wednesday in a message of defiance to the West, which has been increasingly worried about the contentious defense program Tehran has relentlessly pursued as a “nonnegotiable” right.

Back in January, a barrage of more than a dozen such missiles were unleashed from Iran before hitting a US-run airbase in neighboring Iraq. Iranian authorities hailed the attack as a “slap in America’s face” after the latter killed top commander Qasem Soleimani in an airstrike outside Baghdad’s International Airport.

The drills also put to the test a new generation of equipment that Iranian officials said were entirely homemade. Tehran has repeatedly declared that decades of sanctions have served as a blessing in disguise, helping it strengthen defenses based on indigenously developed technologies.

Some of those technologies, Iran claims, can now be exported. On Sunday, the Islamic Republic celebrated the official end to a years-long UN embargo that had fully prohibited it from buying and selling weapons. Yet it remains unclear if Iran could quench its thirst for arms deals as the country faces severe banking restrictions on much of its transactions with the international community.