Iran claims that the US drone it shot down was flying over Iranian territory when hit by a surface-to-air missile. 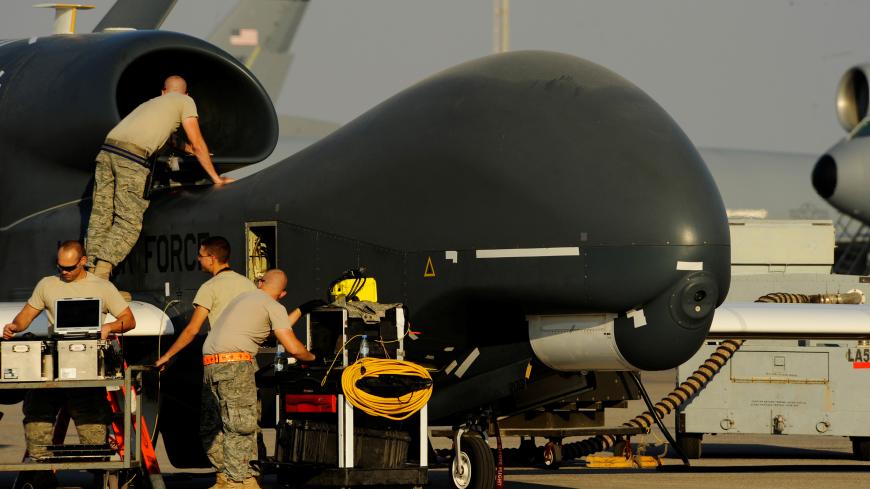 Iran’s Islamic Revolutionary Guard Corps (IRGC) issued a statement on the morning of June 20 claiming that it had shot down an American drone over Iranian territory. US Central Command (CENTCOM) confirmed the incident shortly thereafter, but disputed Tehran's assertions about its location when struck by an Iranian surface-to air-missile.

The IRGC's media team issued the statement, announcing that a Global Hawk drone had been shot down near Hormozgan province, in the south near the Gulf of Oman, opposite the Mobarak Mountains. Also, according to the statement, the drone had been launched from a US airbase in the Persian Gulf and was flying from the Strait of Hormuz toward the Iranian port city of Chabahar. The IRGC said the drone was collecting information, spying on Iran, when it was shot down in Iranian airspace.

Navy Capt. Bill Urban, CENTCOM spokesman, issued a statement disputing the IRGC’s claims, asserting, “[The drone was] shot down by an Iranian surface-to-air missile system while operating in international airspace over the Strait of Hormuz.” The statement further read, “This was an unprovoked attack on a U.S. surveillance asset.”

With these dueling narratives, it will be difficult to ascertain the truth. The debris from the Global Hawk, which can fly at a maximum altitude of 60,000 feet, could be scatter far from the point of impact by the missile, making it hard to pinpoint where it was hit. An article about the Iranian air defense system published by Tasnim News, which is linked to the IRGC, said that the drone had landed in a region “which belongs to Iranian waters.”

IRGC Commander Hussein Salami addressed the drone incident during a speech today in the Kurdistan region. “Today IRGC’s aerospace force bravely shot down the enemy’s spy plane, which had crossed into our territory and was attacking our national security,” Salami said. “This is the style and manner in which the Iranian nation confronts its enemies.” To drive home the point, Salami contrasted the shooting down of the drone and negotiations with the United States, which he said serves only to disarm the country and make it easier to invade.

“Shooting down an American spy plane carries a clear, decisive, fast, explicit and precise message that the defenders of the Iranian Islamic homeland will respond with a firm, conclusive, and certain reaction to any foreign invasion of our territory,” Salami continued. “The borders are our red line, and any enemy who invades will not return and will be destroyed. The only path for the enemy is respecting our territorial integrity and our national interests.”

The commander added, “We state that we have no intention of war with any country, but we are completely ready for war, and today’s event was a clear sign of this precise message.”

IRGC-affiliated websites reported that the drone, the largest in the US arsenal, had been taken out by the medium-range, domestically built 3rd Khordad aerial defense system. Khordad is the third month in the Iranian calendar.