Iranian officials have made statements to reduce tensions following the downing of an American drone off Iran's southern coast. 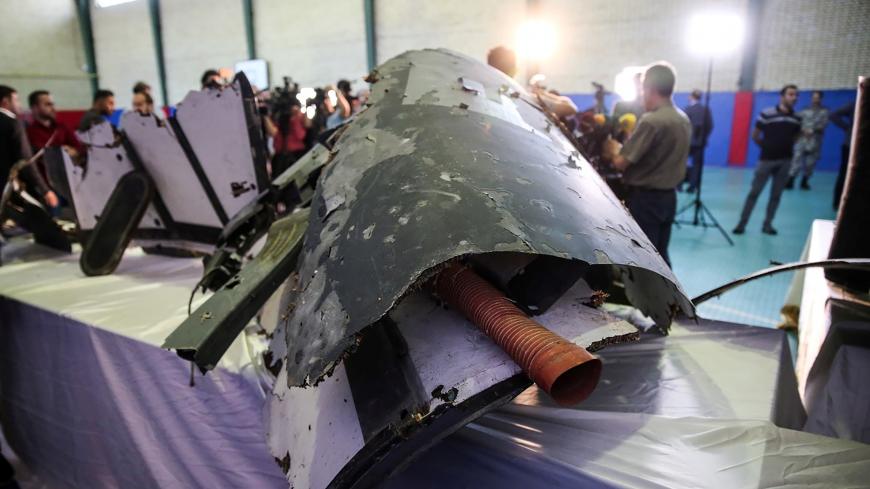 The purported wreckage of the American drone is seen displayed by the Islamic Revolution Guard Corps in Tehran, Iran, June 21, 2019. - Tasnim News Agency/Handout via REUTERS

As tensions escalate between Iran and the United States over an American drone downed in the Strait of Hormuz, Iranian political and military officials have made statements demonstrating they are not interested in escalating tensions.

The Islamic Revolutionary Guard Corps (IRGC) air force displayed June 21 pieces of the downed US drone it shot down in the Persian Gulf region. Iran claims the drone violated its airspace, but Washington disputes the claim. IRGC air force Cmdr. Amir Ali Hajizadeh walked around the debris displayed on the tables before giving a press conference to Iranian reporters.

Hajizadeh told reporters Iran had also spotted on June 20 a Boeing P-8 Poseidon plane with 35 people onboard along with the downed Global Hawk drone. According to Hajizadeh, “This plane had also violated our airspace and we could have targeted it, but we did not because our goal in shooting down the American drone was to give a warning.” Hajizadeh said that before striking the drone, they had issued a warning 10 minutes in advance. He also said the drone had violated international flight rules.

According to Hajizadeh, the drone took off from Abu Dhabi and passed through the Strait of Hormuz. Hajizadeh asked, “If we had done this across the beaches of Washington, what reaction would they have shown? Would they have allowed us to invade their privacy?”

Majid Takht Ravanchi, Iran’s representative to the United Nations, also reiterated claims that Iran had issued multiple warnings that the drone was close to Iranian territory before shooting it down. But he said the warnings were ignored, and once it crossed into Iranian territory and since it was a spy plane, he claimed Iran “had no choice but to shoot it down.”

The current conflict between Iran and the United States began over the Donald Trump administration's withdrawal in May 2018 from the Joint Comprehensive Plan of Action, an international agreement between Iran and the five permanent members of the United Nations Security Council. The United States then reimposed international sanctions on Iran. In response, Iran has announced it will reduce their commitments unless Germany, the United Kingdom and France keep the deal alive by securing financial transactions. The United States has also accused Iran of multiple attacks on tankers in the Persian Gulf, which Iran has denied.

Iranian Foreign Minister Mohammad Javad Zarif spoke about Iran’s upcoming nuclear steps in response to the US withdrawal at a press conference in Esfahan. He said Iran would take the “second step” on July 7. On June 17, Iran announced that by June 27 they would surpass the 300-kilogram, low-enriched uranium cap that was agreed upon under the nuclear accord. Iran is waiting for the three European countries to begin implementing INSTEX — the Instrument in Support of Trade Exchanges — to facilitate trade between the nations. The European countries, however, must walk a tightrope of abiding by US sanctions while making sure the deal stays alive by keeping financial transactions with Iran open.