Saudi Arabia's large-scale military exercises may be cause for some concern in Iran, but Saudi capabilities in the Persian Gulf can't compare to those of Iran's Islamic Revolutionary Guard Corps. 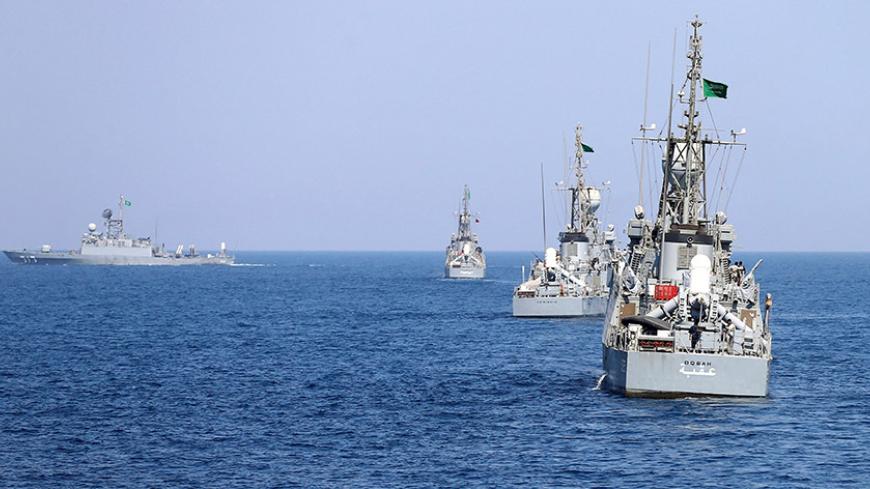 The Saudi armed forces began extensive military exercises in the Persian Gulf region in early October. According to Rear Adm. Majed bin Hazza'a Al-Qahtani, the commander in charge of the drills, the aim of the “Gulf Shield 1” exercises that took place in the Persian Gulf, Strait of Hormuz and Sea of Oman was to “increase the combat readiness of the marine forces and special security forces of Saudi Arabia for aerial and naval combat, bomb dispersal, cyberattacks and other possible military actions against Saudi Arabia.”

The entire Saudi fleet in the Persian Gulf, including frigates, logistical vessels, amphibious ships, air-sea units, special forces, marine and anti-mine units, took part in the exercise, which was the first Saudi Arabia had conducted on such a scale. Riyadh showcased all of its capabilities in Gulf Shield 1, with Western naval forces based in the region, which are in charge of safeguarding Saudi waters in the Red Sea, taking part.

As soon as the war games started, the naval force of the Islamic Revolutionary Guard Corps (IRGC), which is responsible for maintaining Iranian security in the Persian Gulf, issued a stern official statement: “This announcement is for all the vessels, those belonging to Saudi Arabia’s naval force and those which belong to other naval forces that are participating in the military exercise announced by Saudi Arabia. The naval force of the Islamic Revolutionary Guard Corps believes that at its core, this military exercise is a clear case of creating tension and reducing security in the Persian Gulf. Therefore, military vessels participating in this exercise are not allowed to enter the Islamic Republic’s territorial waters. Do not come near the territorial waters of Iran and do not even cruise in international waters that are in the vicinity of Islamic Republic’s territorial waters, since we will not consider such a passage to be ‘innocent passage.’”

The IRGC’s statement was harsh and full of rage. On the other side, the way the exercise was conducted, the propaganda videos highlighting its aims and goals — not to mention the very composition of the drills — targeted Iran in a tough and threatening way. Saudi naval forces had never before conducted such a massive military exercise in the region. Iranian officials — who have warily witnessed the increase in Saudi Arabia’s military operations in the region, particularly in Yemen — are naturally concerned about the military activities of their southern neighbors.

In February, Saudi Arabia conducted a massive drill in its north in cooperation with major contingents from over a dozen other countries dubbed “North Thunder,” greatly concerning Iranian officials. It has also been 19 months since Saudi Arabia started its aerial bombing operations in Yemen. Some in Tehran believe that these activities are basically Riyadh warming up for a possible future battle with Iran.

Saudi Arabia’s navy is clearly less capable than the country’s air force. If Riyadh decides to engage in a naval battle against Iran on its own, or with the backing of the small emirates of the Persian Gulf such as Kuwait and Bahrain, it will face serious problems from the following obstacles:

Iran has two important naval forces in the region: the naval forces of the IRGC and the Islamic Republic of Iran Navy. The IRGC’s naval force covers the Persian Gulf and the Strait of Hormuz while the regular navy is in charge of security in the Sea of Oman. The quantitative capabilities of each of these forces are much higher than that of the Saudi navy.

In the case of a naval war in the Persian Gulf, the IRGC could cause irreparable damage to the oil fields as well as the economic and military ports of Saudi Arabia using its speed boats, surface-to-shore missiles and short-range ballistic missiles. The oil-rich Eastern Province, including Qatif, would be particularly vulnerable to Iranian attack. In contrast, Saudi Arabia would pay a high military price for damaging Iranian ports in the same manner.

Furthermore, the IRGC is constantly preparing itself to face the powerful US Navy in the region. As part of these efforts, it has created points through which it could potentially produce insecurity in the region on different levels. It has the region's largest fleet of small missile ships, best coastal sites for rockets and missiles, biggest and best sea mine systems and the highest number of marine forces. Meanwhile, Saudi Arabia and its Arab allies only have a few — and relatively old — protective and guided missile frigates. Indeed, the combined quantitative power of the naval forces of the southern Arab states of the Persian Gulf cannot be compared to that of Iran.

In addition, in the case of military conflict, Saudi trade carried out via the Persian Gulf would be threatened. Iran, on the other hand, could continue to conduct its maritime trade from the Makran coast.

Nonetheless, all of these factors are theoretical, and things will be different in reality. Riyadh has bilateral security and defense agreements with all the Arab states of the Persian Gulf, the United States, France and Britain. It is hard to imagine that a military conflict between Iran and Saudi Arabia could remain free from US interference. The strategic and geopolitical interests of all the regional and international players in the Persian Gulf and the Strait of Hormuz are intertwined and a war would be a zero-sum game.

This is why former IRGC commander and current Expediency Council Secretary Mohsen Rezaei said in a Sept. 13 interview, “We don’t share a land border with Saudi Arabia and therefore cannot use our ground forces. Air and water lead to the Persian Gulf, and they think that the Americans will stop us there. The only thing remaining is our missile system, and they wrongfully think they can stop our missiles. Their analysis is wrong. We know about their calculations and we have our own plans.”