Protests break out in Iran after death of famed singer

Mohammad Reza Shajarian was a renowned singer and composer of classical music. He also notably supported the 2009 protests in the country. 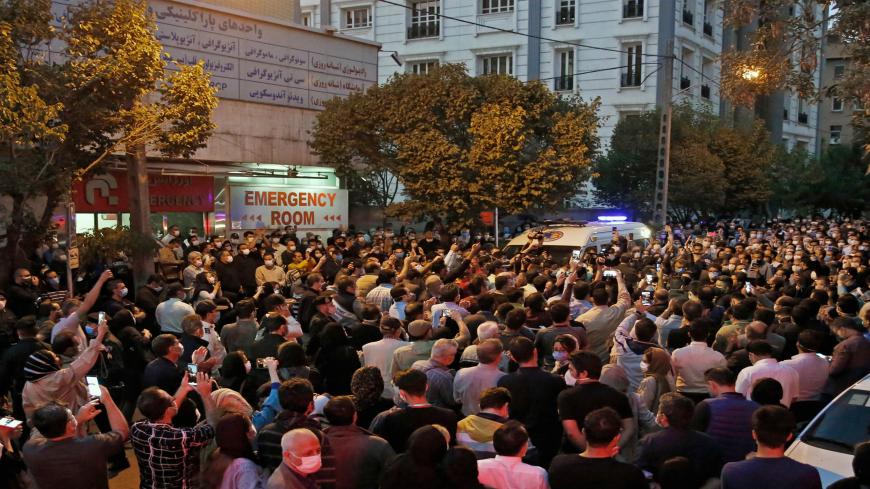 Iranian fans mourn as they gather outside Jam Hospital in Tehran, where singer, instrumentalist and composer Mohammad Reza Shajarian died on Oct. 8, 2020. - AFP via Getty Images

Demonstrations broke out in Iran on Thursday following the death of a popular musician who supported the 2009 protest movement in the country. Iran is under domestic and international scrutiny this year for its ongoing crackdown on dissent.

Renowned classical music composer and singer Mohammad Reza Shajarian died on Thursday at age 80, Radio Farda reported. Shajarian stayed out of politics most of his life. However, in 2009, he asked state media to stop playing his music in solidarity with the Green Movement protest. The government then banned Shajarian from holding concerts and releasing music, according to the US government-funded outlet that covers Iran news.

The Green Movement began following the 2009 election in which hard-liner Mahmoud Ahmadinejad won the presidency against the Reformist Mir Hossein Mousavi.

Protests against the government broke out following Shajarian’s death. The National Council of Resistance of Iran opposition group reported that people protested in Tehran on Thursday evening in memory of Shajarian. They chanted, “State media is a disgrace” and “Down with the dictator,” according to the group.

Reza Pahlavi, who was next in line to rule Iran before the shah was deposed in 1979, also shared a video of the protests. Pahlavi is involved in Iranian opposition activities outside the country.

The cybersecurity watchdog NetBlocks reported that there was an internet outage in Tehran on Thursday night at the time of the Shajarian protests.

Iranian state media also reported Shajarian’s death, albeit without mentioning his support for protesters. Shajarian died of kidney cancer and was mourned by senior government officials, including President Hassan Rouhani, Press TV reported. The outlet referred to him as a “legend” and noted his two nominations for the prestigious Grammy Awards in the United States.

Iran is under pressure from the public and the international community for its treatment of dissidents amid continued protests. Iranian activists and the US government both criticized the execution of famed wrestler Navid Afkari in September. The same month, the United Kingdom, France and Germany summoned the Iranian ambassadors to their countries over the issue of prisoner treatment in Iran.

Protests against the government and the economic situation in Iran broke out in 2019 and have continued this year, as seen with the reaction to Shajarian’s death.