Iran’s hard-line parliament speaker Mohammad Bagher Ghalibaf has tested positive for the coronavirus as the pandemic rages the country. 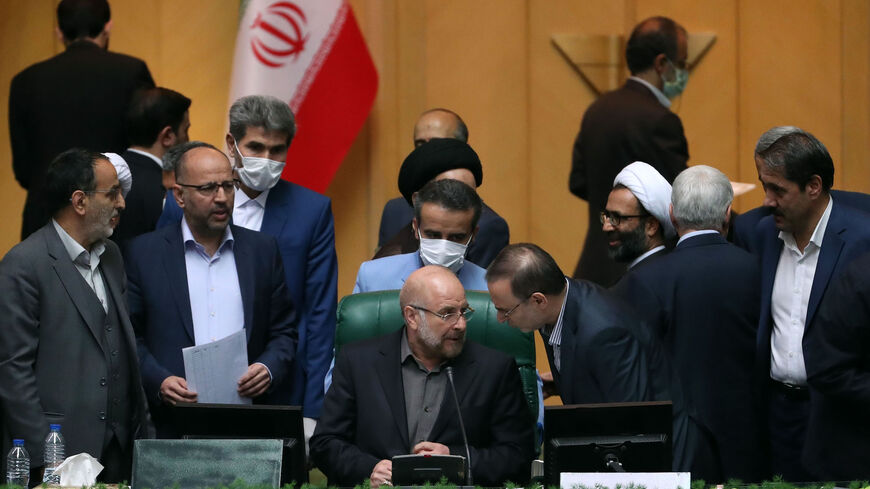 Iranian Mohammad Bagher Ghalibaf (C) sits among members of the parliament after being elected as parliament speaker in Tehran on May 28, 2020. - AFP via Getty Images

Iran’s Parliament speaker Mohammad Bagher Ghalibaf said he was going through treatment under home quarantine after testing positive for the coronavirus. The former military commander is the latest in a string of over 30 Iranian parliamentarians who have joined the infected population. At least three of them have died.

Ghalibaf’s announcement was perhaps no shock to advisers of President Hassan Rouhani. Earlier in October, Rouhani canceled a meeting with the parliament speaker over infection fears after Ghalibaf visited a hospital in the capital Tehran where COVID-19 patients in critical condition receive treatment. The cancellation sparked a verbal clash between the two top officials and their teams.

The president’s advisers accused Ghalibaf of disregarding special protocols and risking the health of others he regularly meets with. Rouhani also called the hospital visit “irrational” and likened it to “standing in the middle of a flood.” Ghalibaf defended his actions, reminding the president that the Iranian authorities ought to make field visits in support of medical workers. “It is neither fair nor rational to leave alone the medical staff with their limited equipment in the danger zone,” he said.

The parliament speaker was one of nearly 7,000 Iranians who were confirmed infected on Wednesday, when the country’s Health Ministry announced 415 deaths, the highest mortality count since the start of the outbreak in February.

Iran’s top medical experts had already warned relentlessly about an October “catastrophe” with exponential death rates unless the government reconsiders its policy and imposes draconian measures to curb a looming third wave. In what has been criticized as a belated response, the government introduced a set of new restrictions on Oct. 22 to be imposed in 43 flashpoint cities, with closures on marketplaces, banks and other public institutions in an effort to bring the situation under relative control.

While small businesses are included in the new restrictions and gatherings such as weddings and funerals are banned, some religious events have recently been held as their powerful organizers openly disobeyed national protocols. One such ceremony seen as a super-spreader event was led by an ultraconservative religious ideologue and brought together thousands of people in the holy city of Mashhad on Monday.

The gathering drew the ire of epidemiologist Minou Mohraz, who has been advising the Iranian government on pandemic prevention policies. “Those who organized the ceremony must be held accountable,” she said, criticizing local officials for failing to shut it down.

The ignoring of cautionary measures comes at the worst moment for fatigued Iranian medical staff, who have lost over 300 colleagues during their months-long battle in underequipped hospitals. Some of those who have survived and continue to risk their lives on a daily basis have been denied their regular paychecks for months on end even as skyrocketing inflation slams Iranian society with hardships not seen in the nation’s recent memory.