Egypt is moving ahead with the restoration of the Grand Avenue of Sphinxes, which experts say will be a great cultural achievement for Egypt and an exquisite addition to the study of the ancient Egyptian civilization. 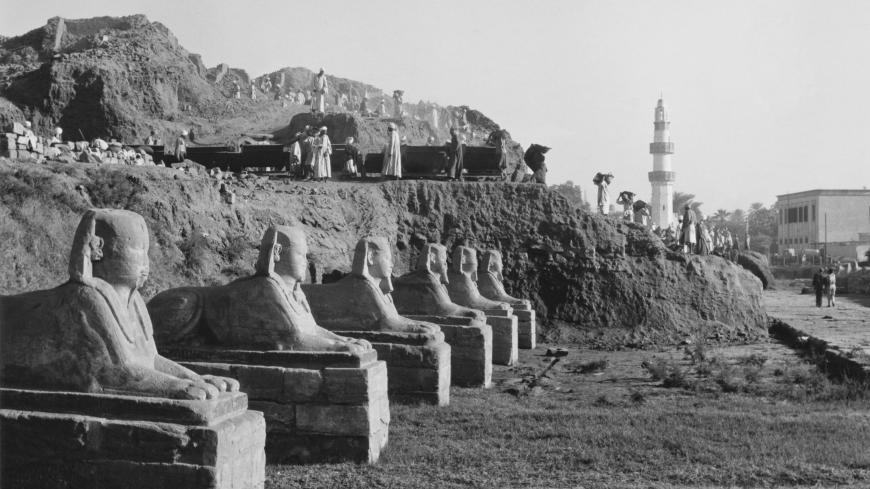 A row of sphinxes at the Ancient Egyptian Luxor Temple complex, during an archaeological dig on the east bank of the Nile, Egypt, circa 1955. - Archive Photos/Getty Images

CAIRO — Excavators are working hard in the ancient southern city of Luxor to trace the remaining part of the city's, and probably ancient Egypt's, most important route, namely the Grand Avenue of Sphinxes.

The almost 3,000-year-old road connects Karnak Temple with Luxor Temple, passing by the domain of Mut.

The avenue is 2,700 meters (1.7 miles) long and about 7 meters (23 feet) wide. It contains hundreds of sphinxes, most of them with ram heads, instead of the traditional human heads, on both sides.

The sphinxes sit on raised bases made of sandstone, opposite one another with the avenue itself in the middle. They look as if they guard those using the avenue between the two temples.

When fully excavated, the avenue of ram-headed sphinxes will be a great cultural achievement for Egypt and an exquisite addition to the study of the ancient Egyptian civilization, specialists said.

“The excavation of the whole avenue will help researchers discover more about the ancient Egyptian civilization,” Mustafa al-Saghier, director of Karnak Temple and general supervisor of the Grand Avenue of Sphinxes Revival Project, told Al-Monitor. “We have already unearthed other objects within the project, including a wall dating back to the Roman period."

The excavation of the avenue is 97% complete. Constructed during the New Kingdom and completed during the 30th Dynasty rule of Nectanebo I (380-362 B.C.), the avenue was buried under layers of silt and sand over the centuries. Urban development in Luxor then put an end to all traces of it. This development included the construction of hundreds of houses and other buildings.

In the 1940s, archaeologists rediscover the avenue when they unearthed some of its sphinxes.

Between 1958 and 1960, Mohamed Abdel Kadir, a leading Egyptian archaeologist who discovered the components of the statue of King Ramses II, discovered the first part of the avenue near Luxor Temple.

Other parts of the avenue were discovered later, but the project had to stop for years until 2005.

Excavators returned to the site in 2008, but they had to stop in 2011 due to a lack of funding and also because of the turmoil that followed the anti-Hosni Mubarak uprising.

They returned in 2017, with hopes to bring this aspiring project to an end.

"The project was suspended for a long time in the past," Saghier said. "It is finally coming close to its end."

The authorities have allocated 600 million Egyptian pounds ($38 million) for the restoration of the Grand Avenue of Sphinxes. Apart from being spent on actual digging, this money also went for the compensation of the owners of the buildings that had been removed to clear the way for tracing the avenue.

The authorities had to remove hundreds of homes, mosques and churches constructed on the avenue over the centuries. This pitted the authorities against the locals on some occasions, despite the importance of the project.

In mid-September, the authorities demolished a 115-year-old Evangelical church to open the door for completing avenue excavations. Five mosques constructed on the avenue, including a 350-year-old one, were also brought down.

The authorities also had to erase residential areas containing hundreds of homes and compensate their residents in order to complete the project.

It will take excavators the remaining part of 2020 and probably the first quarter of 2021 to complete the excavation of the Grand Avenue of Sphinxes. The avenue will be opened in 2021, according to Waad Abulela, head of the Projects Section at the Ministry of Tourism and Antiquities.

Tracing the sphinxes and the avenue was far from easy or speedy. Near-surface magnetic and shallow seismic refraction methods were used in finding some of the sphinxes of the avenue.

A gradiometer survey was made in the area to assess its physical quantity, using modern equipment that illustrates the physical characteristics of its layers.

The sphinxes found in the avenue show little of their former semblance. Most of the heads of the sphinxes are not in place.

This underscores the challenges antiquities specialists are facing to bring the avenue and its sphinxes back to — or near — their former condition.

"The restoration of the sphinxes is far from easy like some people believe," Abulela told Al-Monitor. "These statues were buried in the ground for a long time and were negatively affected by underground water."

Each of the sphinxes has a standing figure of King Amenophis III between its forelegs. The portal of Euergetes I (247-222 B.C.), which makes the entrance to Karnak, stands at the end of the avenue. A high wall adjoins the portal on both sides and forms the road to the temple courtyard.

The same walls encircle Karnak Temple complex. The Grand Avenue of Sphinxes keeps on stretching behind the portal to a small temple within the complex. This small temple is associated with Khons, the ancient Egyptian god of the moon.

"When turned into an open-air museum, the avenue will be the world's largest ancient site," Abulela said. "This will have positive effects on the tourism sector in Luxor."

This open-air museum will be a great addition to Luxor's attractions and a boon for the Egyptian tourism sector, which has been negatively affected by the coronavirus pandemic.

"The revival of the avenue will increase the attractions of Luxor that has no shortage of these attractions," said Mohamed Osman, head of the Tourism Promotion Section at the Luxor Tour Operators Chamber, an independent union of tour operators in the ancient city. "Tourists will surely be interested in visiting this unparalleled site, which will make tourism thrive in the city."