After the success of the Pharaohs' Golden Parade, Egypt is preparing for the grand reopening of the Great Processional Way in Luxor. 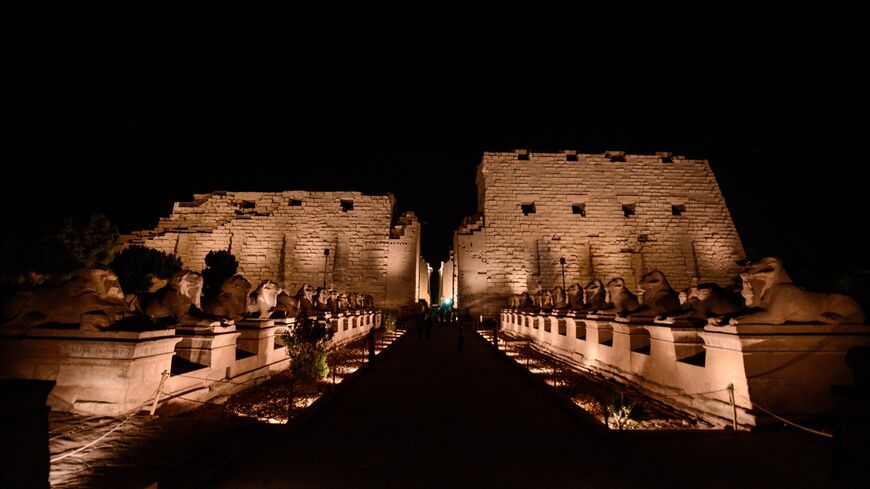 A general view shows the Avenue of Sphinxes leading to the Temple of Amun at the Karnak temple complex in Luxor, south of the Egyptian capital, Cairo, on June 11, 2015. - MOHAMED EL-SHAHED/AFP via Getty Images

After the great success of the Pharaohs' Golden Parade that was held in Cairo on April 3, preparations are underway for another major Pharaonic-themed event that will bring the world's attention to Egypt, this time in Luxor.

The development and restoration of the Great Processional Way (El-Kebash Road) is nearly complete and a major celebration is planned for its the reopening.

“The festival will be held in the last quarter of this year,” Mustafa El-Saghir, director of Karnak Temples and general supervisor of the Grand Processional Way project, told Al-Monitor. He explained that the 2,700 kilometers (1,700 miles) of what is often called the "Avenue of Sphinxes" has many more types of statuary among its 1,200 statues, including many bearing ram features.

The construction of the Great Processional Way began during the New Kingdom (1550 BC-1077 BC) and was completed during the 30th Dynasty rule of Nectanebo I (380-362 BC).

The project is not just about the road and its statues, El-Saghir said. There were other discoveries made between 2006-2011 and will open to the public for the first time after the festival.

He noted that there are also sites for manufacturing pottery, amulets and ornaments along the road. “All these discoveries explain the economic and social life of Thebes residents at that time,” he said.

The upcoming event, El-Saghir added, will revive the celebration of Opet Day. It was one of the famous and important feasts in ancient Egypt. It is dedicated to Amun and is celebrated in the Coptic month of Paopi, when the harvest season ends, between Oct. 11 and Nov. 10.

“Opet Festival was held to honor the Thebes’ local trinity: Amun-Re along with his consort goddess Mut and their son Khonsu. During that festival, there was a procession from Karnak Temple. Three statues representing these gods were placed in gilded barques and carried by priests along the Grand Processional Way to Luxor Temple and back,” he said.

Karnak Temple, on the eastern bank of Luxor, was the venue of the cult of Amun, God of Thebes. Luxor temple, three kilometers south of Karnak, is where he married Mut.

“In the upcoming celebration, people representing priests will carry the statue of Amun from Karnak Temple, Mut’s from her temple and Khunsu's as well on sacred boats, exactly like ancient Egyptians did,” he said, adding that lighting, Pharaonic attire, performances and music will add excitement to the modern festival.

He pointed out that the Opet Festival’s rituals are detailed in Luxor Temple, adding, “The inscriptions also reveal many features of that feast such as music, dance, military marches, presenting offerings and horse shows.”

On July 6, Prime Minister Moustafa Madbouly inspected the latest work at the Great Processional Way. He said that the project is among the most important antiquities-related projects that Egypt is currently working on and aims to make Luxor the largest open museum in the world by linking the Karnak Temple, Luxor Temple, the Temple of Mut along the Great Processional Way.

Magdy Shaker, chief archaeologist at the Ministry of Tourism and Antiquities, told Al-Monitor, “I believe that the opening ceremony of El-Kebash Road and the revival of the rituals of the Opet Festival will surpass the success of the Pharaohs’ Golden Parade because it is based on an ancient Egyptian ritual and not just a new idea to transport mummies.”

He pointed out that Luxorians themselves still include features of the Pharaonic Opet Festival in their celebration of the birthday of Abul Haggag, which falls in mid-Shaban in the Islamic calendar, two weeks before Ramadan.

Abul Hagag was a 13th-century Sufi sheikh. The Fatimid-era mosque that bears his name and marks his final resting place was built in the Luxor temple.

Shaker said, “In the Abul Haggag Moulid, the parade starts at Luxor Temple, where his mosque is located, and tours Luxor’s streets. Grandsons of Abul Haggag and other sheikhs carry ornamented boats and lead the parade, a ritual that all Luxorians and nearby towns participate in. The boat signifies spiritual enlightenment.”

“The three-day festival is always attended by the governor,” he said. “Among other activities, there are horse performances, music, the martial art of tahtib and troupes of zikr dancers performing in tents along the roadside as well as reciting duas and other religious songs,” he added.