The Egyptian government is launching a series of projects and campaigns to raise awareness about the country’s growing population and the negative impact it has on available resources. 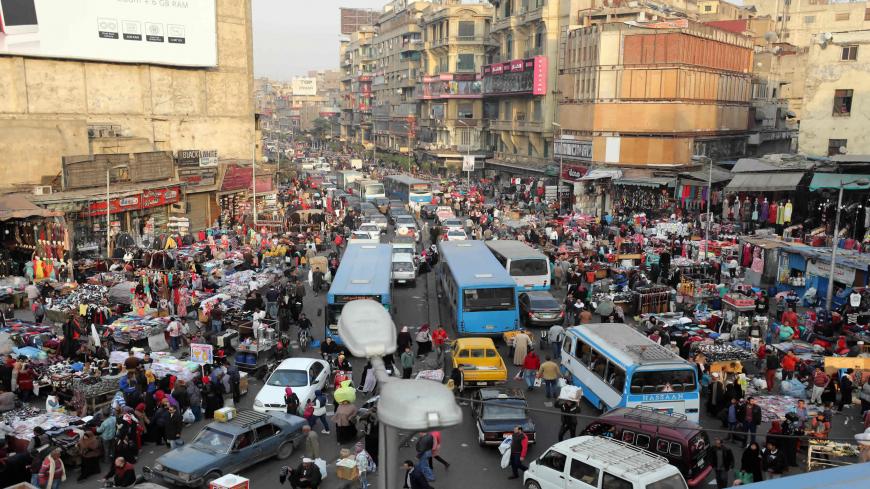 An elevated view of al-Attaba district on the edge of downtown Cairo, Egypt, Dec. 12, 2017. - MOHAMED EL-SHAHED/AFP via Getty Images

Egypt’s growing population has reached over 101 million, an increase of more than 7 million since the last census in 2017, presenting a compelling problem for a country with limited resources.

For decades, the vast majority of Egypt’s population lived along the banks of the Nile River and the Nile Delta, a region that makes up around 7% of the country’s total area of around 1 million square kilometers (386,000 square miles).

According to the 2017 census of the Central Agency for Public Mobilization and Statistics (CAPMAS), Egypt’s population was growing at a rate of approximately 2 million people per year.

In a ceremony organized by the Egyptian armed forces Oct. 11, President Abdel Fattah al-Sisi called on the media and universities to raise public awareness about the population growth in Egypt. Sisi said Egypt’s population is forecast to increase to 194 million by 2050. “This will further worsen the feeling of poverty among the citizens, requiring the state to double all the resources in order to cope with the accelerating population growth,” Sisi warned.

He continued, “Egypt is a country with a special topographical nature. Although Egypt’s area amounts to 1 million square kilometers, not all the lands are fit for living.”

To help put a brake on the soaring birth rates in Egypt, the government launched in late September a family planning campaign called “Two Is Enough,” to change the deep-rooted cultural traditions in high-fertility governorates, where people view children as a vital labor source and insurance policy for old age.

“This campaign targets 1.2 million families in 10 governorates with a view to conveying the message that the population growth derails the development gains,” Minister of Social Solidarity Nivine el-Qabbage said in a TV interview Oct. 12.

The minister said there are 1,200 health educators and 2,000 volunteers working on the ground to raise community awareness about the problem. “The president has also pledged to support us with 7,000 extra volunteers to help change the mindset about the high birth rates,” she said, adding that over 600,000 women have so far benefited from the services of the health clinics, set up as part of the program, in cooperation with the Health Ministry and nongovernmental organizations.

The Health Ministry has recently concluded a fourth phase of a family planning campaign called “Your Right to Plan,” in cooperation with the United Nations Population Fund (UNFPA) to provide free family planning services to Egyptian women. The campaign, which is funded by the European Union, aims to give access to reproductive health services, raise community awareness and increase demand for family planning services.

Egyptian newspapers and TV talk shows have also given wide coverage to the overpopulation problem, with a focus on the imbalance of the growing population and availability of services.

According to the UNFPA, Egypt’s fertility rate reached 3.1 in 2018. The country’s fertility levels have been increasing since 2006, reaching its highest level in 2014 at 3.5 before it stabilized in 2017 to reach 3.4. The Egypt Demographic and Health Survey of 2014 also showed that around 59% of married women in Egypt are using contraception.

Sahar al-Sunbati, secretary-general of the National Council for Childhood and Motherhood, cited school dropout, early marriage and child labor as the main causes for the population explosion in Egypt.

“Many families — particularly in Upper Egypt and poor areas — take their children out of school either to get them into the labor market or get them to marry,” Sunbati, the former head of the Family Planning Sector at the Health Ministry, told Al-Monitor. “The deep-rooted traditions that favor boys over girls are further hindering efforts to control the overpopulation.”

Khalid al-Shafai, an economist and head of the Capital Center for Economic Studies, said the population explosion was wasting any government effort to achieve sustainable development in Egypt.

“Egypt receives a new baby every 13.5 seconds, which adds new burdens on our resources that are already limited,” he told Al-Monitor. “The government is trying hard to expand the cities and create new living areas in order to absorb the rising population, provide housing and create new jobs for all graduates.”

Shafai blamed the media and religious discourses for the failure to bring overpopulation under control over the past years. “The population growth turns into a blessing when it produces educated and trained labor — which will be an addition to the country’s economy — but this is not the case in Egypt where a large portion of the Egyptian labor are not well prepared to be enrolled in the labor market.”