Can Egyptian families be persuaded that less is more?

Egypt's recent family planning policies are educating couples on the number of children to have, debunking the idea that having many children means a source of income now and later in life. 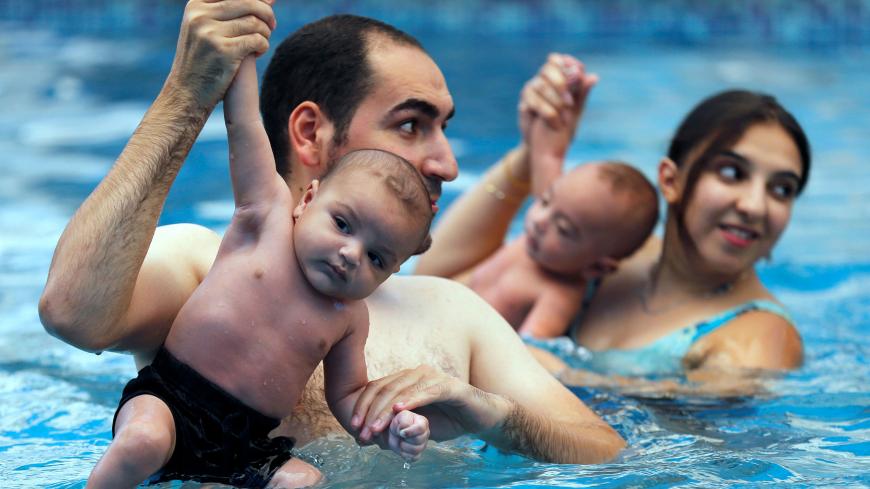 For many years, Egyptians believed that large families were a source of pride and security for old age. New family planning policies are trying to reverse that faith in numbers.

Rayes Abdel Nazeer moved to Cairo from the southern province of Minya in the mid-1980s seeking a better life. He has since worked as a doorman in the affluent residential suburb of Hay El Maadi, 7 miles south of Cairo, living with his wife and children in a small, dark basement in the building where he works. His monthly earnings of 1,300 Egyptian pounds ($73) — just above the minimum wage in Egypt — are barely enough to look after his family.

"In my village in the south of Egypt, large families are a source of pride and children are seen as blessings from God," 59-year-old Abdel Nazeer told Al-Monitor.

While he admits it is a daily struggle to put food on the table for his family, he is nevertheless skeptical about the Egyptian government's new family planning campaign that advocates for smaller families using the slogan "Two Are Enough."

"I believe that God will provide for every child, and children — especially sons — grow up to support their parents in their old age," said Abdel Nazeer, who has five children. Three of his older sons now have their own families to support. The two younger ones, who are 17 and 20, live with their parents in the small basement and help their father clean the cars of the tenants of the apartment for a small monthly fee.

Many poor families in Egypt share Abdel Nazeer's conviction, considering children as a source of income.

“Egypt's poor tend to believe that the more children they have, the bigger the family income. They often force young children to drop out of school at an early age to start working," said Hanan Girgis, a population expert and executive vice president of Baseera, the Center for Public Opinion Research.

But recent price hikes resulting from the harsh austerity measures adopted by the government in November 2016, which included the flotation of the Egyptian pound and subsequent cuts in state subsidies, are prompting a change in the mindset of some Egyptians. Feeling the pinch of the rising costs of fuel, housing and basic commodities, many young couples are having to reconsider their decisions and are weighing their birth control options.

"When I first got married, I wanted a large family with at least four or five children. Since having my first child four years ago, I have realized how difficult it is to raise a child. Due to the high cost of living, few can afford to have a second or third child. It will be a long time before my husband and I decide to have another child," Kholoud Taha, an upper-middle-class housewife, told Al-Monitor.

With nearly 95 million inhabitants, according to the World Population Review, Egypt is the Arab world's most populous country. With a newborn every 15 seconds and a population growth rate of 2.4% annually, the "catastrophic" population boom is piling pressure on the already hard-hit economy struggling to recover from the political chaos that followed the 2011 uprising. The fact that the bulk of the population — around 95% — is concentrated in a narrow strip of land along the Nile River constituting less than 5% of the country's total land area has exacerbated the problem. Overcrowding, congestion, high pollution levels and poor delivery of public services are just some of the manifestations of the high population density.

Not surprising then that overpopulation has become a major policy concern for the government of President Abdel Fattah al-Sisi. The government's family planning campaign, launched last year, is just one attempt by the authorities to stem the rapid population growth that Sisi has warned "is as critical as the terrorist threat." If the current growth rates persist, Egypt's population is expected to reach 119 million by 2030, according to a 2017 report by the United Nations Population Fund (UNFPA), a grave prospect that some analysts have described as "an explosive population bomb."

Girgis attributes the high fertility rates in recent years to a shortage in contraceptives and poor access to reproductive health care services, especially in the rural south. "In Egypt, there is an urban-rural divide. Since the 2011 uprising, there has been a marked deterioration in reproductive health care services in clinics, particularly those in the provinces outside Cairo. Women had little access to birth control, and the few clinics outside the major cities offered no services to women seeking advice on family planning," she said.

The "Two Are Enough" campaign promises to change this. Targeting over 1 million women in 10 of Egypt's poorest governorates — most of which are in the underdeveloped southern region, where population growth rates are the highest — the two-year project aims to encourage families to limit births to two children per family instead of the current average of four.

The targeted women are beneficiaries of the Ministry of Social Solidarity's World Bank-supported Takaful and Karama social safety nets program, an initiative that offers monthly income support to poor and vulnerable households based on an incentive system related to children's school attendance and use of maternal and child health care.

The family planning campaign is a collaborative effort between the Ministry of Social Solidarity and the Ministry of Health. The plan aims to deploy 12,000 family planning advocates to state clinics in at least a dozen rural provinces. These "advocates," along with doctors and nurses, have attended advocacy training sessions supported by the UNFPA.

Young volunteers who also participated in the training will go from house to house in rural villages to spread awareness about family planning. The key message is that fewer children means a better quality of life and less pressure on household budgets. The UNFPA is also supporting a training program for journalists covering population issues including reproductive health. "The role of the media cannot be overestimated: Clearing misconceptions about birth control and disseminating the 'correct' messages about family planning can go a long way in helping the campaign succeed," May El Sallab, Female Genital Mutilation Program Coordinator at UNFPA, told Al-Monitor.

Meanwhile, member of parliament Ghada Agami has proposed a bill linking parents' rights to receive state subsidies to family planning. If signed into law, families with more than three children will be denied access to state benefits such as free education in government schools and other subsidized goods. "The rapid population growth threatens to derail the government's development efforts and is undermining the quality of life of Egyptians. We need to act now to avert severe food and water shortages in the future," Agami told Al-Monitor.

"Since the success of Egypt's family planning campaign in the mid-1980s when growth rates dropped from a high of over 3.5% in the 1970s to 1.7% in early 2000, successive Egyptian governments have been complacent in dealing with the family planning issue. It is time we pick up where we left off. What we need is a collective effort with everyone on board: the media, civil society, the private sector and the government. That's the only way the campaign can have an impact," Girgis concluded.