The residents of Qalqas, south of Hebron, will finally see the main road to their town’s entrance reopened, blocked in 2000 by the Israeli authorities. 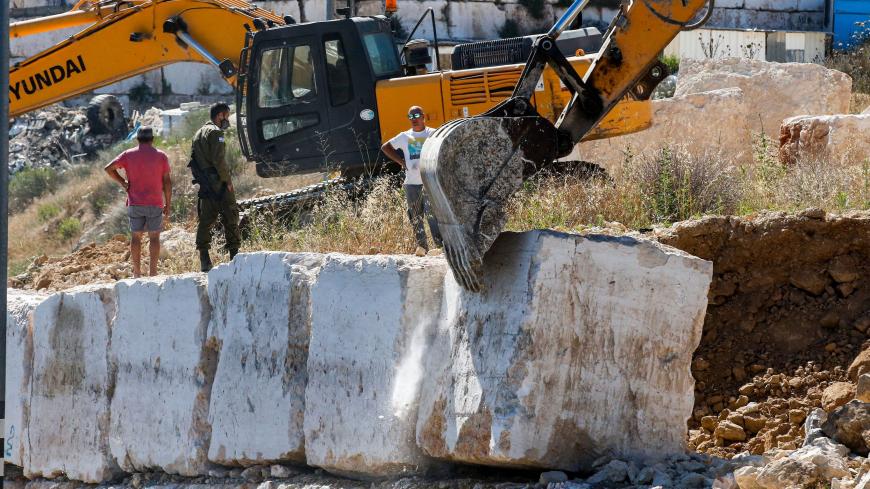 Israeli earth movers remove concrete blocks along the side of a road lying in Area C of the occupied West Bank, where Israeli administers full civil and security control, in the flashpoint city of Hebron, July 2, 2020. - HAZEM BADER/AFP via Getty Images

RAMALLAH, West Bank — Hebron municipality, in the south of the West Bank, began long-awaited work Sept. 21 to expand and open the barrier known locally as the "Qalqas barrage" south of the city, which the Israeli forces closed more than 20 years ago.

Some 5,000 people live in Qalqas village. A highway known as Street 60 lies along one side, just minutes to the Hebron city center. With the outbreak of the 2000 intifada, the Israeli army blocked the entrance to the town with a dirt barrier, thus preventing residents from taking Street 60 to the city and forcing them to take a longer and more difficult route. People also cross the barrier and Street 60 on foot to reach vehicles they leave parked there, risking being run over on the highway.

Qalqas' residents have repeatedly tried in vain to open the road over the past 20 years.

The opening of the road will not only end the long drives to the city center, it will also enable economic, social and urban development in the area that consists of the sole outlet for the governorate’s urban expansion.

The deputy mayor of Hebron, Yusef Jabari, told Al-Monitor that the works to open the road started a few days ago, adding that the village is in a convenient location for development and the expansion of Hebron, sandwiched between the two sides of the city.

Jabari added that citizens who need to get to the city fast, such as students or people seeking medical care, often run across the highway. He said that eight people have been hit doing so since the barrier was erected.

Hebron municipality’s many requests that the Israeli authorities remove the barrier had all been rejected, Jabari noted. He went on, “Since 2019, there have been efforts to work with the Israeli side, through the Palestinian Liaison Office, and Israel made suggestions such as building a tunnel under the highway [ostensibly to avoid contact with the area's settlers], which we opposed. The meetings and contacts continued until the Palestinian leadership decided to end all agreements reached with Israel.”

He said that at that point, the municipality received an email from the Israeli authorities granting it permission to remove the barrier.

According to the plan agreed upon with the Israeli authorities, the Hebron municipality will build a large square on the site of the barrier and a new street running parallel to Street 60, complete with sidewalks and center islands, providing access to Hebron.

Jabari said that Israel has refused to execute or finance the project, forcing the Hebron municipality to cover the cost of about 4 million shekels ($1.16 million) from its own budget. He added that it's possible the local community and businesses will contribute 25% of the cost. He stated that the project will take three months and is expected to be completed before the end of the year.

Qalqas resident Zuhair Abu Daoud, 51, told Al-Monitor that reopening the road will end the suffering of the people who have been demonstrating for many years over the matter. He said that the Israeli authorities promised many times to open the road, but never delivered. He called on the municipality to hurry and complete the road before the Israeli authorities revoke their decision.

He said, “When the road opens it will turn the area upside down, as the residents will reach the city faster and easier, and Qalqas will turn into a transit point to some of the surrounding areas.”

He added, “Qalqas and the surrounding area will recover experience many economic benefits because this road is so important. Many factories are expected to move their headquarters to that area because there is so much unused land available. Land prices are expected to double, and an urban development and real estate boom is anticipated, as it is a natural extension of the city of Hebron and businesses will be encouraged to invest there.”

He went on to saying that there is a social aspect as well, as the village ends its semi-isolation. He said, “The citizens refused to let their daughters marry young men living in Qalqas because it is hard to access the city. Some of my close friends have refused to visit me at home because it takes forever to get there.”