Architects from Middle East, beyond tear down barriers in Venice

Turkey’s national pavilion and other entries from the region are among the highlights at this year’s Venice Architecture Biennale, whose theme "Freespace" has prompted curators to investigate national boundaries, the human toll of migration and the concept of freedom. 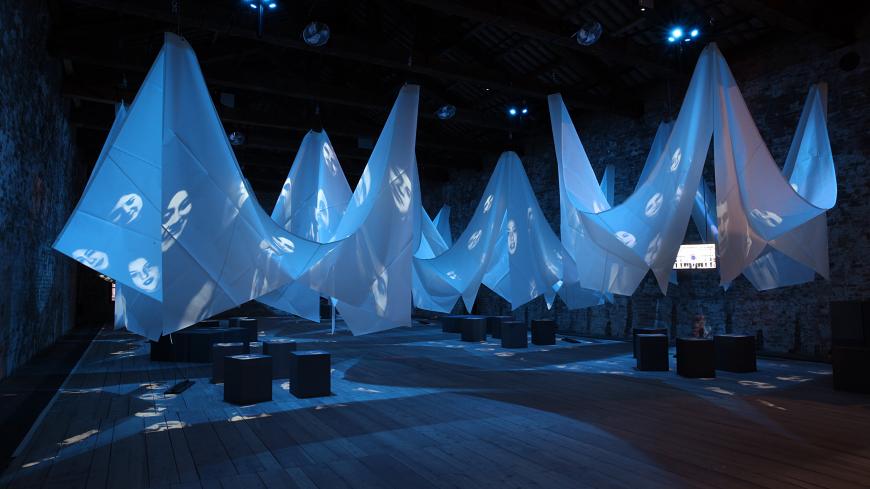 VENICE — Turkey’s entry in this year’s Venice Architecture Biennale asks why the event even exists. It is the kind of earnest inquiry you would expect of students, and that’s precisely who is posing it.

“Not everyone can go to the Biennale, whether it’s because of the cost of admission or the difficulty in obtaining a visa or other obstacles,” he tells Al-Monitor. “This is an effort to open the discussion to everyone, because the debate over architecture requires broader participation.”

“Vardiya,” which means "shift" in Turkish, occupies a darkened floor in the Arsenale, Venice’s centuries-old shipyard. Sail-like canopies that hang from the ceiling shroud video screens that introduce topics for discussion. Throughout the event's six-month run, the students, selected from 450 applicants, will take shifts running a slate of public events that include lectures and workshops, transforming the space into one of communion.

Exhibiting a work in progress rather than a finished installation poses risks, but also allows for greater inclusiveness, Piker says. “This work is not necessarily directed at a result, but at the process of learning,” the 39-year-old Istanbul-based architect says.

The Pavilion of Turkey is one of 65 national venues at the 16th edition of the Venice Architecture Biennale, curated by Irish architects Yvonne Farrell and Shelley McNamara, who describe the theme in their manifesto as “a space for opportunity, a democratic space, un-programmed and free for uses not yet conceived.” The exhibit includes 71 architects in addition to the ones who have participated in national pavilions.

Much of “Freespace” moves away from the monumental to explore the unfinished, re-appropriated or marginal. Several installations question the notion of freedom itself, whether it’s through the lens of migration, urban reclamation or the fortification of national borders.

In Turkey, city planners, environmentalists and others in civil society complain they are absent from the discussion in President Recep Tayyip Erdogan’s drive to transform 8,000-year-old Istanbul’s skyline with mosques, bridges and tower blocks.

The 2013 Gezi Park protests, the country’s largest-ever anti-government demonstrations, prevented Erdogan from razing a park to make way for a shopping mall. More recently, his plan to build a $14 billion shipping canal that will destroy forests, farmland and the city’s main source of drinking water became a point of contention in last month’s presidential election — a rare chance for debate in a country where freedom of speech is restricted under a state of emergency.

Piker acknowledges that the discussion fostered in the pavilion is taking place far from Turkey, but that what emerges in Venice could encourage conversation back home. “Everything becomes possible when we expand the platform for dialogue,” he says. “This goes beyond architecture, this need to learn from one another.”

Other Middle Eastern nations are making a strong showing this year with pavilions that investigate how the modern world’s fractured use of space divides and isolates its inhabitants.

Unbridled development is at the heart of Lebanon’s entry, its first representation at the national level at the Venice Biennale. “The Place that Remains” surveys Beirut’s hinterland that has until now largely escaped a building boom that powers the Mediterranean country’s economy. Six digital maps intermittently overlay a 3D relief of the ecologically fragile watershed of the Beirut River.

On the walls are life-size images of villagers who bear a flower, walking cane or other objects they feel represent their imperiled homeland. Curated by Hala Younes, professor of architecture at the Lebanese American University, the project demands viewers take stock of what is at stake before the area is swallowed up by Beirut’s relentless sprawl.

Saudi Arabia’s debut dovetails with a reform drive that has seen the country open cinemas and put women behind the wheels of cars. Coming to Venice is part of the government’s Saudi Vision 2030 plan that includes boosting creative talent.

“Spaces in Between” centers on the 40% of city land that is largely vacant after a half-century of internal migration fragmented Saudi urban space, connected by strips of highway. Architects and brothers Abdulrahman and Turki Gazzaz separated the room with screens made of sand and resin, upon which are projected digital maps of sprawling cities and photographs of empty lots repurposed as tree-lined public squares that allow people to walk and interact.

The informal economy is at the heart of the Egyptian Pavilion’s “Robabecciah,” an Arabized Italian term to describe an ancient form of recycling. It includes a poignant short film about a lonely junk dealer who refuses to part with a kitschy portrait of a young girl. The installation examines ways to redevelop the abundance of street markets that overwhelm Cairo’s roads and pavements.

One of the event's most compelling exhibitions is situated in the Israeli Pavilion. “In Statu Quo: Structures of Negotiation” portrays the brittle coexistence in the Holy Land at a time of heightened hostility. An original 19th-century Ottoman model of Jerusalem’s Church of the Holy Sepulchre shows the labyrinthine ownership of the pilgrimage site that persists as a source of strife among various Christian denominations.

Nira Pereg’s “Abraham Abraham Sarah Sarah” films Muslims and Jews in their strictly delineated realms within Hebron’s Cave of the Patriarchs during holidays. In the next room, plaster-cast models offer design iterations for the Western Wall Plaza, an expanse left empty for five decades after Israel seized control of the Old City and razed the Arab quarter. The failure to decide the square’s fate highlights Israel’s deeper struggle with its own identity.

Physical barriers also crop up in pavilions from beyond the Middle East. Germany’s “Unbuilding Walls” marks the 28th anniversary of the fall of the Berlin Wall this year — the same number of years the edifice stood. Cypriots, Irish, Koreans, Israelis and Palestinians discuss on video screens life in divided lands. The British have withdrawn from their neoclassical building, covering it in scaffolding and moving the installation “Island” to a rooftop platform where visitors are served tea. The departure evokes Brexit and Britain’s embrace of isolationism and over-idealized tradition.

The dispute over globalization, inequality and migration looms large at the US Pavilion’s “Dimensions of Citizenship,” where several works question the concept of belonging. Much of it feels like criticism of President Donald Trump’s polarizing rhetoric on asylum seekers, nationalism and trade that has sown discord among Americans.

“MEXUS” looks at the United States' southern border not as the scene of violence and crime often depicted in the media but as one of shared natural resources. In Tehran-born artist Mandana Moghaddam’s video, “Exodus,” luggage is adrift at sea to remind us what is lost by those who take flight for the often empty promise of a better life elsewhere.

Freespace runs through Nov. 25 at the Venice Architecture Biennale.