In a vast project to cut down hundreds of Kenya trees near Rafah city for the expansion of the highway, Gaza’s agricultural and green spaces face constant threats, writes Asmaa al-Ghoul. 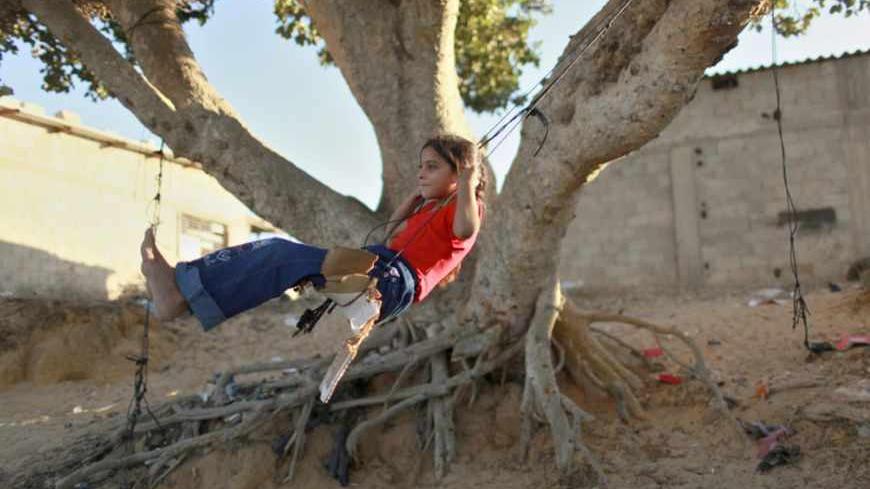 A Palestinian girl plays on a makeshift swing in Khan Younis in the southern Gaza Strip, Sept. 23, 2012. - REUTERS/Mohammed Salem

More than three men tried cutting down a huge Kenya tree on Salah al-Din highway in the city of Khan Younis. Each man held a sharp tool, trying to cut down a part of the tree, tossing its lush green branches aside. The Kenya's smell can be easily distinguished from a distance. Not only the nose picks up the smell but memory too. A Kenya tree was ever-present throughout our childhood, standing at the entrance of the school, or in the middle of its square. Its smell remains with you as you grow older.

Three hundred Kenya trees on the Salah al-Din Highway stretching from the city of Rafah in the south to the city of Deir al-Balah in the north have been chopped down since March by the Ministry of Agriculture to pave the road. It is said that some of these trees are posing a threat as they are doomed to fall.

It used to protect us from the sun

Brothers Zuhair and Hamdan Abu Hadayed, ages 6 and 9 respectively, arrived at their home that overlooks Salah al-Din Highway on the outskirts of the city of Rafah. Drops of sweat were visible on their faces. Hamdan said the taxi drove them from the remote al-Fakhari elementary school. Sometimes they return home on foot. Whether they waited for a car or walked back home, Hamdan and his brother used to enjoy the Kenya trees' shade and their leafy branches, which once waved in the breeze.

Their cousin, 32-year-old Karima Abu Hadayed, sat in front of her house. She said that trees existed even before her family inhabited the region, 40 years ago. The trees are considered a primary source of shade during the summer. However, she stressed that the region has seen many accidents. Many children from Karima's family have died due to narrow streets and high-volume car traffic. She suggested putting speed bumps on the road.

Felled trees stretch out on both sides of the road. Footpaths used to follow the trees along this road, which has no sidewalks. Another large Kenya tree has been cut down in front of one the educational institutions in Khan Younis. The landlord of this establishment, 52-year-old Eid al-Astal, said, "My heart is crying over this tree that has been with me forever."

He added that at a certain time of the day, he used to sit under its shady lush huge branches along with dozens of children, but that unfortunately it was sold at a bargain price  to a contracting company. He also said that the other trees that are marked with red will be felled as well. He stressed that the tree was healthy and away from the street. The institution's janitor, Mohammed Saka, shares Astal’s opinion. "They cut down the trees. What else will they do? Cut off the air?! Now we cannot stand the heat and there is no more shade to sit in," he said angrily.

Al-Monitor met with the director general of the planning department in the Ministry of Agriculture, Nabil Abu Shamala. He explained that the decision to cut down these trees was taken six months ago, but its implementation started in March following the formation of a committee charged with assessing the trees that stretch out along the sides of Salah al-Din Highway. It was discovered that 141 trees were condemned because of cracks and rot, while 180 trees are hindering the expansion of the highway.

He added that it is important to rehabilitate the infrastructure, which necessitates the removal of all obstacles hindering the expansion of the road, as it is used by huge automobiles loaded with goods coming from the Rafah and Kerem Abu Salem crossings. He said that there are more than 300 trucks that pass this road daily, stressing that the plan aims at expanding the road by about 40 meters [about 130 feet].

Undersecretary of the Ministry of Agriculture for Natural Resources Zida Hamadeh, who attended the meeting with Al-Monitor in Abu Shamala's office, said that cutting down the trees is taking place in coordination with Civil Defense, the municipalities and the police, in anticipation of any accident, such as trees falling on communication wires.

He stressed that the procedures are being implemented in a professional and transparent manner, through tenders with contractors. Contractors have been cutting down the trees. The lumber is bought by ship manufacturers or is used for clean energy purposes. The ministry also uses a part of the timber. He added that fast-growing seedlings have been planted in place of the felled Kenya trees, which — according to him — cause cracking in the ground due to their deep roots.

When I referred to the brutal way in which the trees were being chopped down, Abu Shamala interjected saying that "the trees will be felled either way, it does not matter how." He added, "We know that trees are an essential part of our life, but we must cut them down to protect people from fatal accidents."

Abu Shamala and Hamada are both against the establishment of housing projects in agricultural areas, whether by the Housing Ministry, UNRWA or the Qatari Projects Committee. They  stressed that residential areas are increasing by 5% every year — while there are not many alternatives — which threatens the agricultural areas. The high population density of the Gaza Strip is the main cause behind the scarcity of agricultural areas, especially with the horizontal rather than vertical expansion in housing which the Ministry is seeking.

Abu Shamala stressed that the 300 felled trees will be replaced with 2,500 seedlings. He added that the area of citrus fruits has been reduced to 10 square kilometers [3.9 square miles] due to Israeli aggression. However, due to the efforts of farmers and the Ministry of Agriculture, this area has increased by 20 square kilometers. In addition, palm trees have increased from 80,000 to 200,000 in the Gaza Strip.

Cutting down trees is bad

Agricultural expert Falah Abdul Qader Younis, with whom Al-Monitor met in a Gaza cafe said that cutting down trees is bad regardless of the causes. All projects aiming to remove part of the oxygen and shade are doomed to failure. He said that the lush Kenya trees that have been around since the 1960s are considered a natural insulator, stressing that Kenya trees protect themselves by forming "phenolic" cells that are resistant to diseases. He also said that trees become unhealthy because of humans who strip their bark.

Younis finds it strange that 60-year-old trees are being cut down and replaced with others that need another 60 years to grow. "Couldn't they have beautified the trees and kept them on the new road without the need to cut them down?" he asked. He also stressed that not one Kenya tree over the past 30 years has fallen because of the wind or any other reason. He asserted that the trees are strong, with a diameter of more than one meter. Nevertheless, he does not deny the recurring car accidents on Salah al-Din Highway.

The occupation forces are killing trees before humans

Green areas are threatened by cement, housing projects, population density — which accounts for 4,505 persons per square kilometer — and poor urban planning. However, one must not forget the Israeli occupation, which also represents a great threat to green areas.

According to the Ministry of Agriculture statistics, 3,366,000 trees and more than 70,000 dunums [1 dunum equals 1,000 square meters] have been destroyed in the Gaza Strip since the beginning of the second intifada in 2000, causing losses amounting to about $1 billion.

According to Younis, the occupation forces are a key factor behind the reduction of green areas. He said that 30 years ago, at the beginning of his work, the area of citrus fruits in the sector accounted for 75,000 dunums, and used to compete with the Israeli fruits in Eastern European markets, which pushed the Israeli authorities to fight against them. Indeed, Israel managed to limit the citrus fruit production in Gaza by offering 700 shekels (about $190) to farmers to remove citrus fruits and replace them with vegetables. Thus, greenhouses later spread but military invasions and wars were waged, destroying millions of citrus, Kenya, olive and many other kinds of trees.