Despite repeated closures, financial difficulties and the loss of expensive animals during times of war, Gaza’s zoo continues to function, writes Asmaa al-Ghoul. 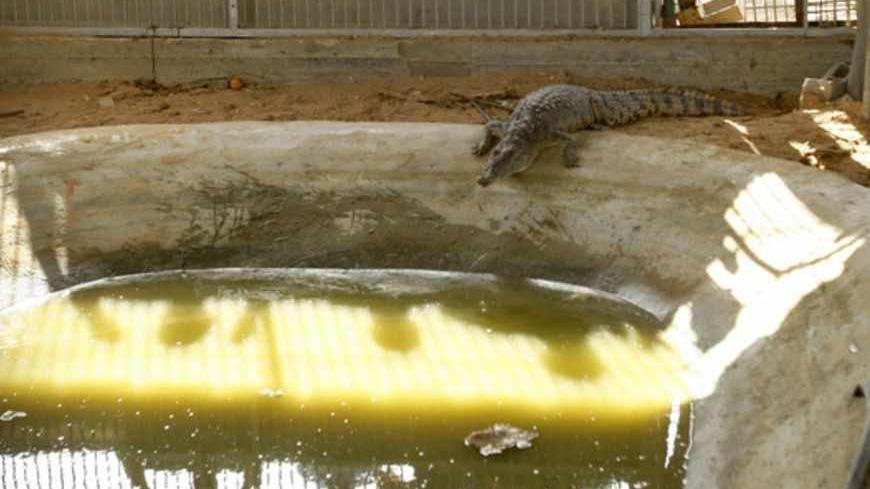 Shadows of people are cast against the water as a crocodile basks in its enclosure at a zoo in the northern Gaza Strip, Nov. 6, 2012. - REUTERS/Ahmed Zakot

The roar of the lioness sparked both fear and joy within the children visiting the Khan Younis (South Forest Park) Zoo in Gaza. The moment the she started roaring, they ran to her enclosure, asking: “Is she hungry?”

Ahmed Kawareh, one of the zookeepers, told them she was. He then turned to the adults and whispered, “It’s mating season, and there are no male lions to keep her company.”

The South Forest Park Zoo, established in 2007, stretches over an area of 8,000 square meters in the southern Gaza Strip. The zoo used to house another lion, but it died during the first war in 2008-2009. Some of the zookeepers said that the lion died of neglect and starvation during the war that lasted for 20 days, while others said it ate something poisonous. In any case, the lioness has been alone for more than four years.

Nour Ayyad, 10, stood in front of the fox enclosure. She hopes to one day see an elephant or a giraffe in Gaza instead of the wolves, monkeys, cats and rabbits that currently fill the region’s zoos, all of which she had already visited with her parents.

The zoo's owner, Mohammed Awaida, who oversees all the details in the park, told Al-Monitor that he had actually bought a new lion to keep the lioness company, but has been waiting for more than a year to bring him to the Gaza Strip. The lion is now in the custody of an acquaintance. Awaida added that bringing the lion through the border tunnels with Egypt would cost him over $20,000, due to the inherent risks, which include the fear that the animal might suddenly wake up when tranquilizers wear off, as has happened on another occasion inside the tunnels, when a lion attacked workers. He added that most of the park’s animals came through the tunnels, but when they were young.

Although the zoo is tidy, clean and filled with trees, the space allocated for the animals is too small. They look grim inside their enclosures, as if they were there for an exhibition, rather than a healthy, proper zoo.

Awaida confirmed that he had brought snakes several times before, but they died due to the unsuitable conditions. An ostrich also died due to a faulty injection administered by a veterinarian who only had experience with treating chickens.

Sulaiman Masmah, 6, was sitting with his family on one of the park’s wooden tables. He wished to see an elephant, a giraffe or a zebra. His 5-year-old brother Youssef reminded him not to forget the reptiles. Their father, Mohammed Masmah, told them that he had seen a giraffe in the Giza zoo in Egypt in January and promised to take them there someday.

Importing an elephant and a giraffe to the zoo in Gaza is considered nearly impossible. Bringing a giraffe to Gaza would cost $250,000, while an elephant would cost about $120,000, according to Awaida, who stressed that some people have made millions through the illegal animal trade.

Children were gathered in front of a reinforced steel barrier, screaming and trying to get the only crocodile in the park to move. They thought it was dead, but a zookeeper sprayed it with water, which made it swing its tail violently and open its big jaws, scaring the screaming children away. However, they soon forgot their fear and returned giggling to the crocodile’s enclosure. Five-year-old Fadel Shana said that he had been waiting for more than half an hour for the alligator to move in the pond before it finally jolted, calling the animal a traitor.

When asked about the zebra, Awaida smiled, recalling the famous story of his friend, the owner of the Marah Land Zoo, who dyed a donkey with white-and-black stripes to make it look like a zebra. Although this story attracted the world’s attention, it failed to help the zoo owner keep the park, which closed a few months later due to large losses. Awaida explained that opening a zoo entails high costs, including costs of animal care, cleaning, workers’ salaries and food for animals. These expenses are much more than the revenue brought in from tickets, which are sold for less than one dollar per person.

The South Forest Park also contains a falcon, monkeys, a llama, a deer, cats, a wolf, a parrot, an Australian tiger and an ostrich. However, on closer inspection, these animals are not all as they seem. Some have been embalmed because the park’s owner could not bear to let them go, like the dead lion and the snakes. Awaida, however, could not embalm the camel given its huge size. The animal died as veterinarians failed to treat it, he said.

The Gaza Zoo, which is located on Salah al-Din Road and stretches over an area of 5,000 square meters, is the second among four zoos in the Strip. Gaza once had six, but two were closed due to financial losses and the deaths of large animals.

The manager of the Gaza Zoo, Mohammed Alaywa, told Al-Monitor that his zoo was the first in the sector, established in 2006. Before that, the zoo was inside a public park in the "beach camp" (Al-Shati refugee camp), which contained statues of animals. However, when the border tunnels were built, small animals were brought into the Gaza Strip. The statues of big animals, on the other hand, remained in the park. Later on, the Shaza Institute reopened the zoo on Salah al-Din Road, but did not invest in the project. A French association fully funded the project and brought the lion and lioness, among other species, in 2006. Nevertheless, the park was completely destroyed during the first war.

Alaywa added that the aerial and artillery bombardment killed many animals, including the Arabian camel, which was hit by a rocket. During the ground invasion, soldiers entered the zoo and the lion and lioness escaped into the bathroom, where the soldiers trapped them until the war was over. When the war ended, the zookeepers returned to the zoo to find that most of the animals had died due to the shelling or after having devoured one another. Alaywa added that the zoo was later on 60% restored, but it lacked many animals such as deer and reptiles.

Umm Mohammed Shaheen wandered with her two sons Muhammad and Iman in the park that is covered with sand. They moved from one cage to another trying to take photos of the grim-looking animals.

“There are not many trees in this park; most of it is covered with sand and dust. The animals look grim and there is a bad smell. That is why it does not attract enough attention,” said Shaheen. She also stressed that the authorities ought to establish an actual zoo, instead of empty cages that fill the place.

Not far from her, children gathered around the monkey enclosure, which contained the first animal to be brought into the sector through the border tunnels.

“I wish there was a chimpanzee like the one we see on television,” said Qais Abu Zeid, 9.

Alaywa added that animals are bought in the black market at exorbitant prices, which is why international animal organizations do not offer much support to buy an elephant, giraffe or zebra, the most demanded species among children. He also noted the difficult process of bringing animals through the tunnels or crossings, which makes establishing a real zoo in the Gaza Strip a dream for both children and adults.